The good news in developed markets is that changing demographics means people are getting older and living longer. The downside is that governments and corporates are no longer able to afford final salary pensions which is why the defined benefit is being replaced by direct contribution schemes.

Back in 2001, the Wise Men Report sponsored by Ecofin calculated that an individual with a forty year career wishing to retire on 35% of final salary would need to invest 20% of their salary each year of these 40 years if the investment return was 2%. The problem today is interest rates in continental Europe are negative due to the introduction of quantitative easing by the ECB in 2015. This has translated into a search for growth which is increasingly manifested via equities – from blue chips to mid and small caps – as well as an increasing demand for exposure to companies from countries with higher interest rates.

Nearly two decades on from the report, the industry has dealt with MiFID II plus related regulated reforms. It has delivered arguably the best quality of equities markets on a per company basis in the world – so let’s use these refined equities markets to complement traditional bank lending as financing channels for the real economy. London has already seen an increasing internationalisation of capital raising over the past two years. For example, in 2017 nine out of ten of the largest IPOs on the London Stock Exchange were in non-UK companies – two of which were Global Depositary Receipts (GDRs), denominated in USD settling in Euroclear Bank. This trend continued in 2018 with significant dual listings from emerging markets such as the successful issuance of Slovenia-based NLB – largest bank IPO in EMEA last year – and Kazatomprom, a Kazakhstan-based mining firm that has a larger global share of uranium than Saudi Aramco has of oil. In both cases the community of international investors active in London contributed the majority of risk capital.

Delivering mechanisms to help investors deploy capital into equities markets requires minimising the slippage costs of buying and selling, particularly in an economic low-return environment. This is important in contributing to long term investment returns. For example, Turquoise – a pan-European MTF, majority owned by London Stock Exchange Group – allows, via single connection, members to trade securities of 19 European countries – developed and emerging – and settle each trade in the respective country’s Central Securities Depository (CSD). Turquoise has great experience connecting to multiple clearing houses, including the fully interoperating LCH (UK), EuroCCP (Netherlands), and SIX x-clear (Switzerland). This provides a choice of central counterparties (CCP) to members and ultimately settles trades into one of 20 settlement destinations, including Euroclear Bank for International Order Book Depository Receipts denominated in other currencies such as USD.

Turquoise functionalities, which are designed in response to customer demand, operates three parallel order books. These include lit, midpoint that also provides potential price improvement and quality execution for electronic blocks, and periodic lit auctions that welcome orders of all sizes. Since its launch in 2008, Turquoise customers have matched more than Ä7 trillion.

Turquoise members increasingly are trading exchange traded funds and GDRs in foreign companies from countries such as Egypt, India, Russia and South Korea. Investors are finding liquidity via Turquoise innovations designed in partnership with our stakeholders.

Coincidently, by January 2019, more than 2,900 stocks traded on Turquoise compared with around 1,600 in early 2013. Why does this matter? It is because approximately 80% of all value deployed onto all stock exchanges and platforms across UK and Europe are concentrated in just the top 300 blue chips. The fact that the number of active stocks is increasing – with a particular surge following the 2015 introduction of negative interest rates – demonstrates that investors are seeking growth in investment returns, not only through blue chips but also down the market cap table to mid and small caps. These investors are finding liquidity in these mid and small caps via Turquoise trading.

Asset managers have published views about the role of exchanges in well-functioning markets and the need for innovation in midpoint and electronic block trading. A consortium of global buyside and sellside firms initiated Plato Partnership in order to study and improve market structure in Europe. At last year’s Asia Equity Trading Summit, asset managers and the wider industry shared insights on the Turquoise market model, developed in partnership with the investor community. In January 2019, independent firm, Rosenblatt Securities confirmed that this industry model had become the fastest growing and largest dark pool in a post-MiFID  II environment, ranking Turquoise Plato™ as number one of 20 venues evaluated by the New York broker (see Figure 1). 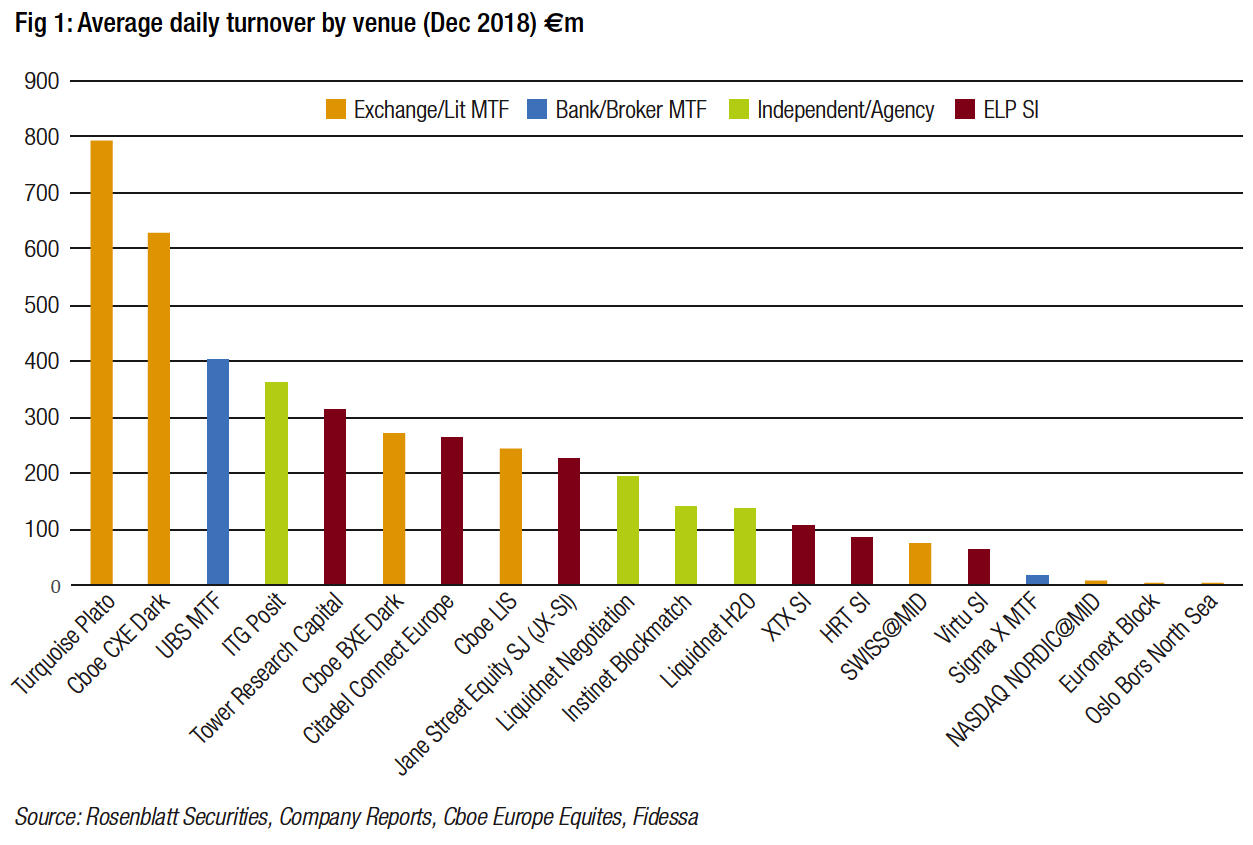 Rosenblatt Securities observed during 2018 that the elimination of broker crossing networks and, the imposition of double volume caps under MiFID II contributed to a steep drop in annual share of trading by dark pools. The changes favoured venues that focus on block trades which are exempt from the caps. Share of trading of European electronic block trading services evaluated by Rosenblatt Securities, including Turquoise, grew to just under 30% of European dark pool value traded.1

Figure 2 shows that Turquoise Plato™ continues to set year on year records for value traded. All of these trades are matched at midpoint of the primary best bid and offer for potential price improvement. The interesting trend is the remarkable growth of Turquoise Plato Block Discovery™ from less than 5% to more than 45% of all the Turquoise Plato™ midpoint value traded by calendar 2018, reflecting the significant change in investor behaviour by sending much larger orders to the market. 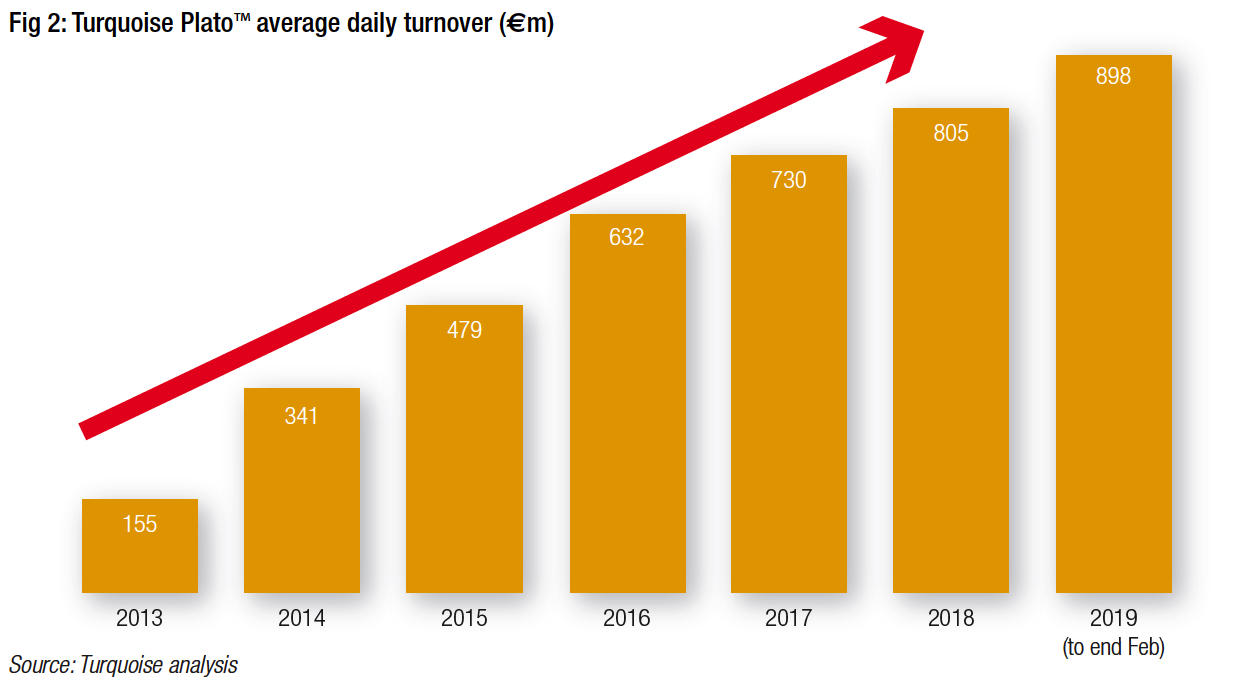 Fast forward to February 2019, and customers using Turquoise Plato Block Discovery™ have traded more than Ä173bn – more than any other provider, as a fully automated service without the fading associated with manual firm-up models. The insight is that electronic block trading at midpoint works and Turquoise is fully adopted by the global investor community, ready to scale beyond UK and European markets.

Turquoise customers on 31 January 2019 set a new daily record of Ä653m value traded via Turquoise Plato Block Discovery™, contributing to a new weekly record of Ä2,581m during 28 January to 1 February 2019.

Today in 2019, investors using Turquoise Plato Block Discovery™ are more likely to match multiple big trades per stock in one day. This service has grown a significant user base and is becoming the leading electronic block and quality midpoint trading venue in Europe.2

Intraday trading is fairly consistent on Turquoise Plato Block Discovery™ with most activity matching in the morning. This complements primary exchanges where there is a relative peak ahead of the closing auction at the end of the trading day.

Turquoise has a proud track record of innovation and partnership supporting efficient capital markets.8 As Turquoise celebrates 10 years of trading, we’d like to thank customers as we look forward to what the next 10 years will bring as financial markets, investors needs and market structures continue to evolve.9