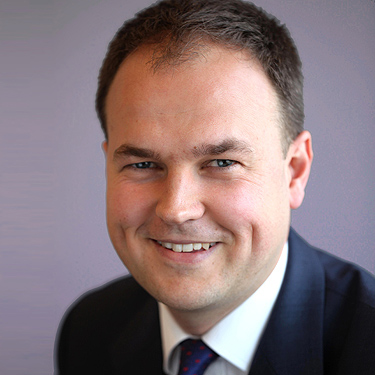 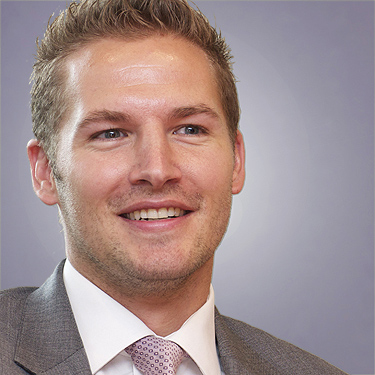 A number of emerging market exchanges are implementing changes aimed at increasing their appeal to international investors. Mark Buchanan (left) & Matthew Cousens (right) of Credit Suisse* look at the foremost among these – Russia – which over the last few years has overhauled its equity trading infrastructure as part of a wider plan to turn Moscow into a major financial centre.

The merger between MICEX and RTS on 19th December 2011 was an important first step. Since then, a Central Counterparty Clearing House (CCP) has been created; the National Settlement Depository has been granted status as the country’s sole Central Securities Depository (CSD); T+2 settlement has been introduced; initiatives aimed at encouraging electronic trading have been launched; and a closing auction has been introduced. 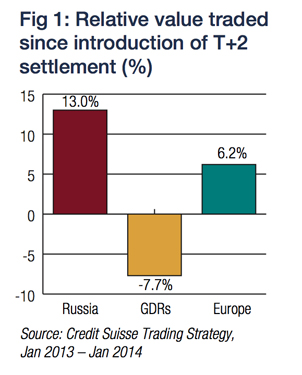 The changes implemented thus far appear to be having a dramatic impact on Russia’s market microstructure. In the five months since T+2 settlement was introduced (prior to recent developments in Ukraine), average daily turnover on the Moscow Exchange (MOEX) increased by 13.0% versus the average from January to September 2013 (see Figure 1). Over the same time period, the average daily turnover (ADT) in Russian global depository receipts (GDRs) on the LSE’s international order book (IOB) fell by 7.7%; therefore, MOEX has experienced a 20.7% relative increase in ADT since the introduction of T+2 settlement. The differential versus other European stocks is less pronounced (+6.7%), but still significant.

The most likely explanation for the step-change in volumes is that brokers, like Credit Suisse, are now starting to offer their clients algorithmic and Direct Market Access (DMA) to MOEX. This view is supported by recent market share gains on MOEX. Since T+2 settlement was introduced, MOEX’s market share has increased from 52% to 57% (see Figure 2). This is not unprecedented.  However, in contrast to previous market share gains, it has been achieved in a persistently low volatility environment and is therefore suggestive of new players entering the market.

The changes have also resulted in a marked reduction in the premium paid for depository receipts (DR) over local Russian shares. Of the 47+ DRs which are listed on the IOB and NYSE, five are currently trading at a significant premium (>2.5%) to the underlying share on MOEX (see Figure 3). This is mainly because the DR programs in these stocks are fully subscribed, and many institutional investors outside Russia are currently restricted from investing in the local shares.

However, the introduction of a CSD in April 2013 removes one of the main restrictions and improves the appeal of direct investment in Russian local shares. It is therefore not surprising to find that most DR premiums have trended downwards since the CSD became fully operational.

Not all of the reforms have been a resounding success. In September 2013, MOEX brought Russia into line with the other markets in Europe by introducing a closing auction. At ~1% of average daily volume (ADV), utilisation is well below the norm for European markets (the closing auction accounts for ~16% of ADV in Euro STOXX 50 names). The main reason for this is that brokers are currently prohibited by Russian law from crossing orders on-exchange. Until this restriction is lifted (expected sometime in 2014), liquidity is unlikely to grow and major benchmark providers will continue to use the last traded price as the official closing price in their index calculations.

The decision to grant the National Securities Depository (NSD) status as Russia’s sole CSD on November 2012 removed a key barrier for trading in Russian local shares for foreign investors. The new CSD fully complies with Rule 17f-7 of the US Investment Company Act of 1940, allowing US funds to invest directly in Russian local shares. It also improves investor protection, permits direct participation in corporate actions and simplifies the settlement process. In 2014, the situation should improve further, as equities are expected to become eligible for Euroclear and Clearstream settlement services.

The move from T+0 to T+2 settlement – which brings Russia into line with the planned migration of European markets from T+3 to T+2 by 2015 – has also improved matters considerably by removing the need to pre-fund trading in the most liquid names. Under the new system, the level of collateral required to trade in one of the top 50 names varies according to the liquidity profile of the stock, with stock and cash (USD or RUB) deemed acceptable forms of collateral.  In practice, for the top 50 names the market leg settles on a T+2 basis while the client or OTC leg settles in a T+3 basis. This is due to timing differences in the settlement cycle. In May 2014, MOEX is expected to remove these timing differences, which should allow a genuine T+2 market to emerge. Outside of the top 50 names, the old pre-funding model still applies: 100% stock/cash needs to be in place before sell/buy trades can be initiated.

After many false starts, Russia is finally on the verge of having an equity market infrastructure which befits its status as one of the most liquid and highly capitalised markets in Europe. Average daily turnover in Russian stocks is $1.6bn, making Russia the ninth most liquid market in Europe. With a free float market cap of $223bn, Russia is also the ninth largest market in Europe, behind Italy ($312bn) and ahead of Denmark ($166bn). Liquidity is already on the up following the recent changes, and if the government proceeds with its long awaited privatisation programme, the investible universe of stocks in Russia could increase further.

Moscow is still some way short of ranking alongside the likes of London and New York as a major financial centre. However, recent changes are very much a step in the right direction for international investors, and are to be applauded.

Does the CBOE takeover of BATS go against the spirit of MiFID? By Sylvia Smit, Head of Equity M ...