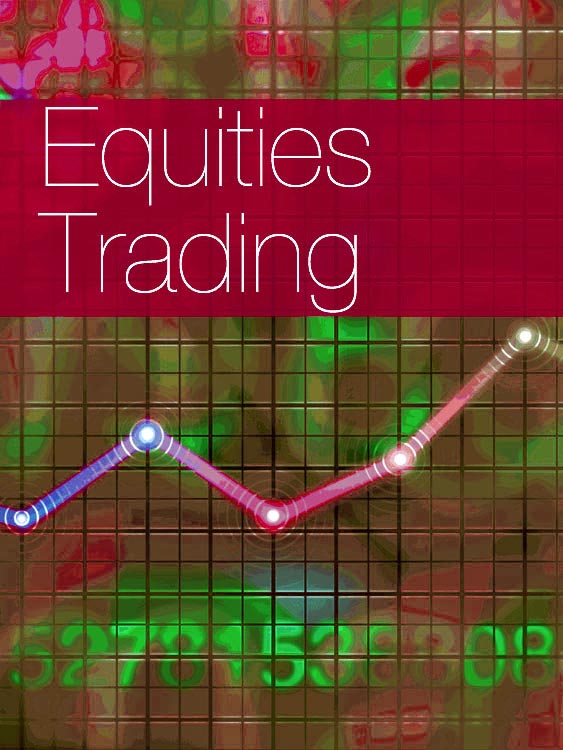 NO TIME TO CATCH YOUR BREATH.

Lynn Strongin Dodds looks at how the raft of regulation has altered the equity trading arena.

Although the financial industry looked at MiFID I with trepidation, it had no idea of the ensuing storm of regulation that was to be triggered by the credit crunch. Altogether, they fundamentally altered the equity landscape spawning different trading venues, strategies and market participants. Infrastructure had to be revamped, technology upgraded and value propositions re-evaluated especially on the investment banking front.

If that were not enough, there is little breathing space as MiFID II is just around the corner. “I think last year sell and buy side firms were trying to understand and position themselves for MiFID II,” says Per Lovén, head of corporate strategy EMEA at Liquidnet. “The major impact to the market regarding secondary trading is the volume caps in relation to reference price and negotiated trade waiver as well as changes to broker crossing networks. Regarding the volume caps, it would be naïve to expect all trading ending up in lit markets when or if a cap is breached. Rather ironically, this change, which is driven by an attempt to increase transparency may actually make the market less transparent. A large portion of trading that was happening in dark MTFs may not end up on the lit markets but instead be traded OTC, SI or simply disappear.” 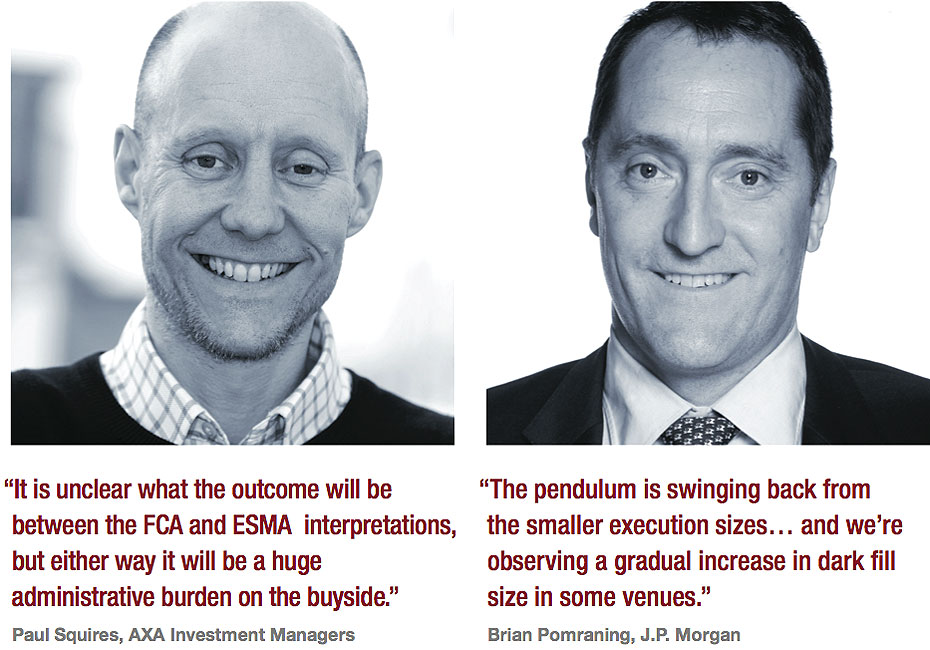 In many ways, dark pools could revert back to their original function as venues for the larger trades as they are exempt from the volume caps of 4% per venue and 8% across all dark pools under the reference price pre-trade transparency waiver. Any stock that breaches the limit is banned from trading in the dark for six months and its trade will have to move to lit venues such as stock exchanges.

Numbers crunched by Rosenblatt Securities show that dark venues accounted for just over 6% of European equity trading last year. The figure though does not include data from all broker-run dark pools, which, if included, could increase their contribution to over 10%.

One of the motivating drivers behind the greater transparency is the behaviour of high frequency traders which was highlighted in US author Michael Lewis’ Flash Boys in March 2014. They have long been under the spotlight but Lewis’ book alleged that they were rigging the markets. Some institutional funds have stopped trading in some of the biggest dark pools because they feel that they are being undercut by these firms who catch on to their trading strategies.

The industry is not waiting for 2017 to arrive and is already preparing for a brighter world. “Markets are already adapting,” says Brian Pomraning, head of equities execution services in Europe, the Middle East and Africa at J.P. Morgan. “The buyside trade on lit and dark venues for different reasons and the caps do not mean there will be an end to dark trading. Instead, the pendulum is swinging back from the smaller execution sizes that we have seen over the past few years and we’re observing a gradual increase in dark fill size in some venues along with growth in the use of conditional orders.”

He adds: “Typically clients have and still do rely on high touch trading desks to cross large blocks of stock but increasingly there is a trend for more electronic solutions which act as a complement to high touch desks to identify crossing opportunities.”

In response, J.P. Morgan has debuted a conditional order type with its AQUA algorithm which works orders on lit and dark venues while also searching for block liquidity opportunities. If a suitable block is found, it can cancel orders being worked elsewhere to be executed on JPM-X. The US broker along with Barclays, Instinet, ITG, Morgan Stanley, Neonet and Société Générale, Bank of America Merrill Lynch, Citi, Deutsche Bank and UBS have also lent their support to the London Stock Exchange Group-owned Turquoise’s Block Discovery which was launched last October. 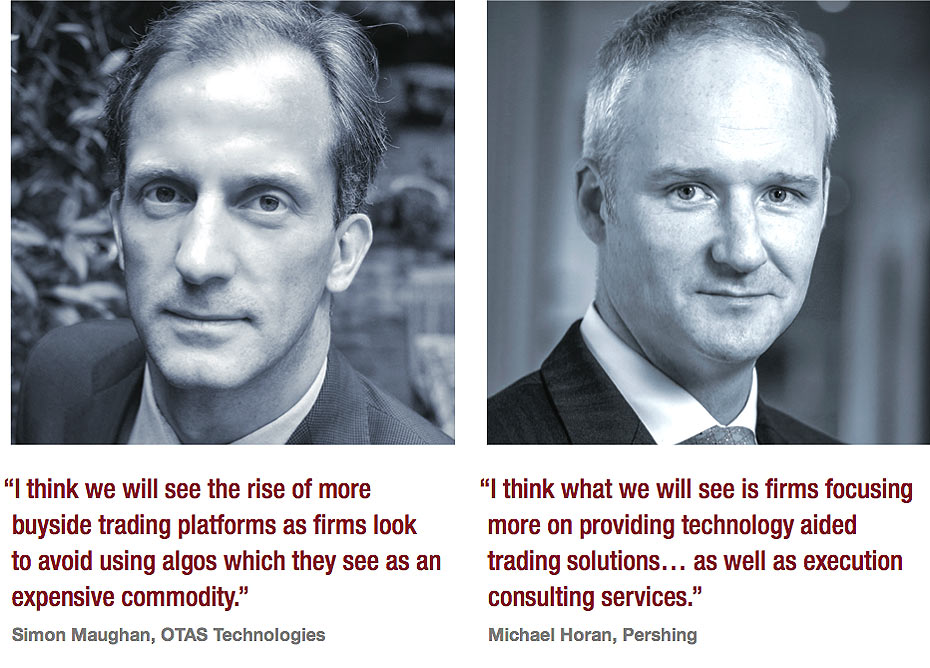 The service enables market participants to buy or sell a large block while also seeking smaller trades to be executed if the block trade does not find a match. If there is a pairing, then the deal is sent via a randomised auction service, which tends to last between 5-45 seconds, thereby discouraging HFT players. Since its launch, the average trade size executed through Block Discovery has been around €261,000 while the largest trade size executed so far was worth €3.29m.

Others are also hoping to join the fray. For example, Nasdaq is in discussions with its members and buyside firms about increasing the trading of larger-sized orders on Nordic@Mid, its Nordic dark pool while Euronext is also mulling over its options to attract more block trades to its venues.

There are also industry led solutions such as Plato which has both buy and sell side backers including some of the same sellside names on Block Discovery such as Barclays, J.P. Morgan, Morgan Stanley, Citi as well as Goldman Sachs plus luminaries from the buyside including Deutsche Asset & Wealth Management and Norges Bank Investment Management.

Unlike the other initiatives, it is a not-for-profit trading venue focused on large-sized trades with part of the proceeds being slated to fund academic research into finding ways to improve trading. Although there have been endless reports into the effects on markets of controversial trends such as HFT or dark pools, market participants and academics alike admit the findings have been incomplete due to a lack of extensive and high-quality data available for study

“There is definitely a new dynamic between the buy and sell side,” says Paul Squires, head of trading at AXA Investment Managers. “There is a lot of innovation on both sides but I particularly like the Plato Partnership because it is a genuine buy and sell side collaboration and a not for profit utility.”

The shifting nuts and bolts of execution though are only one component of the regulatory overhaul. The other major focus area is the payment of broker research. It has been a long running theme in the UK ever since the Myners report fifteen years ago but it has also come under the gaze of the European Securities and Markets Authority (ESMA) which is providing the guidelines to MiFID. The problem though is that the two regulators do not see eye to eye with the UK’s Financial Conduct Authority advocating a total split between research and execution while the Europeans stop just short of an outright ban.

“There is a big disagreement between the UK and the continent over unbundling,” says one European head of electronic trading sales at a major broker dealer. “I would say most UK firms are farther ahead and have commission sharing arrangements (CSA) in place while those on the continent have different approaches. However, it will be a big change if research is paid for out of the funds or client money. It is not clear though what the outcome will be.”

Squires adds: “The UK asset managers were generally ahead in terms of adopting unbundled practices but the regulator has observed that some firms were not so robust and there was not enough unbundling. It wants the industry to get to the right place for its clients. It is unclear what the outcome will be between the FCA and ESMA interpretations (segregated research payment accounts or enhanced CSAs), but either way it will be a huge administrative burden on the buyside.”

There is much less division over the methods to improve best execution. Both MiFID II and the thematic review undertaken by the FCA are taking a much harder line. The Europeans are requiring firms to take all sufficient steps to obtain, when executing orders, “the best possible result for their clients taking into account price, costs, speed, likelihood of execution and settlement, size, nature or any other consideration relevant to the execution of the order.”

Meanwhile UK firms are being told to “improve their understanding of the scope of their best execution obligations, the capability of their monitoring and the degree of management engagement in execution strategy.” 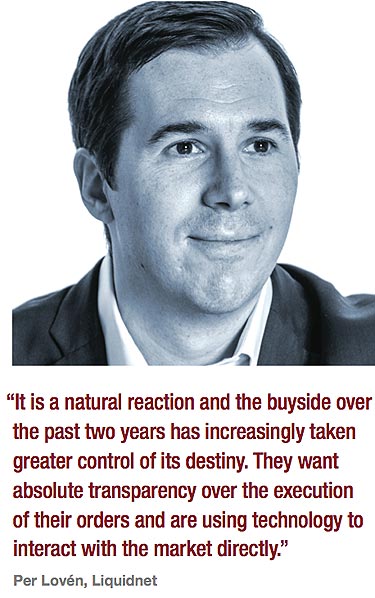 Not surprisingly, against this backdrop, the relationship between the buy and sell side has and will continue to evolve. Asset managers are increasingly executing more flow themselves, building their own algorithms and developing new tools to measure broker performance. “It is a natural reaction and the buy side over the past two years has increasingly taken greater control of its destiny,” says Lovén. “They want absolute transparency over the execution of their orders and are using technology to interact with the market directly.”

Simon Maughan, head of product specialists at OTAS Technologies, adds: “I think we will see the rise of more buyside trading platforms as firms look to avoid using algos which they see as an expensive commodity. There will be a few launches and then as with most industry initiatives there is likely to be consolidation. The buyside will also be monitoring broker performance much more closely and will be looking for pre trade and post trade analytical tools to better measure them.”

“There are so many regulatory headwinds that it is making it increasingly difficult for the sellside to make money,” says Michael Horan, head of trading services at Pershing, a BNY Mellon company. “They have been forced to close their prop desks and now there will be stringent controls on BCNs. I think what we will see is firms focusing more on providing technology aided trading solutions such as algos, direct market access and block trading platforms as well as execution consulting services.”