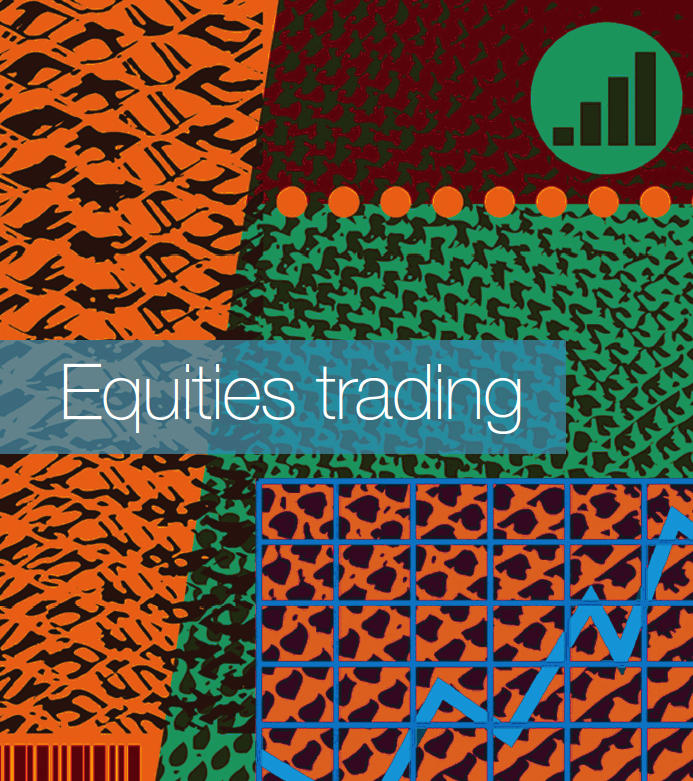 THE WINDS OF REGULATORY AND POLITICAL CHANGE.

MiFID II is not the only game in town. Geo-political tensions and passive investing are also taking their toll on equity markets. Lynn Strongin Dodds reports.

Last year, implementation of MiFID II consumed the hearts, minds and wallets of both the buy and sellside. Trading patterns shifted as predicted with greater use of block trading, periodic auctions and systematic internalisers. However, it is not just regulatory forces changing the landscape. Geo-political tensions and changing investment habits are also influencing equity trading. 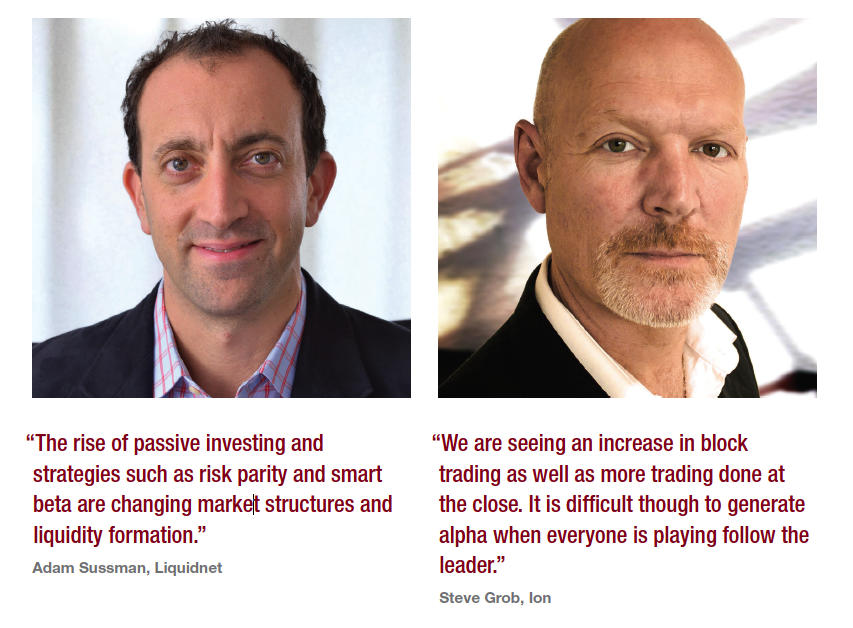 “The rise of passive investing and strategies such as risk parity and smart beta are changing market structures and liquidity formation,” says Adam Sussman, global head of market structure at Liquidnet. “There is not enough discussion about what impact this is having on funds and how they can better access liquidity. One question is whether the market structure should be better aligned with these trends.”

Steve Grob, chief marketing officer at Ion, also believes these investment trends are slowly altering the face of markets and how trading is done. “We are seeing an increase in block trading as well as more trading done at the close. It is difficult though to generate alpha when everyone is playing follow the leader.”

Morningstar’s 2018 Global Report on the fund industry shows that passive index funds continued to gain traction last year at the expense of actively managed funds. The former garnered $695bn down from a record $962bn in 2017 but long-term active funds lost $87bn to outflows, the group’s first net outflows since 2008.

In trading terms, this has translated into a rise in closing auction volume because passive investing typically involves funds being priced at the close. While this is a worldwide trend it has been particularly pronounced in Europe due to MiFID II. Figures from TABB’s European Equities Liquidity Matrix February 2019 report show that closing auction activity in FTSE 100 stocks jumped from around 12% of order book activity in July 2016, to over 20% in February 2019. Meanwhile, volumes on periodic auctions, seen as a dark pool alternative, rose for the first time in four months, with average daily notional traded totalling €960m in February 2019, compared with €912m in January 2019. The venues accounted for 2.2% of total order book trading during the month.

Average daily notional in trades exceeding the Large-In-Scale (LIS) thresholds have also seen growth, recording €1.177bn from €1.052bn in December 2018. Overall these trades comprised 35% of all dark MTF trading, compared with 33% in December 2017. The report notes that one of the fastest growing platforms is Cboe’s LIS block venue, a relative newcomer compared to the venues run by Liquidnet, ITG Posit and Turquoise Plato Block Discovery. It is now the second-largest block venue, accounting for 22% of Europe’s LIS market, and has seen larger volumes than Liquidnet – the top block platform by volume with a 28% chunk – on several days so far in 2019.

The rise of the SI

Another marked trend is the emergence of systematic internalisers which according to Tim Cave, analyst at TABB Group and author of the report, captured roughly 13% of addressable European equity trading activity compared with less than 1% prior to MiFID II’s introduction. While global investment banks may dominate, electronic liquidity providers (ELPs) are snapping at their heels. Cave estimates that ELP SIs now account for around 18% of total addressable SI volume, nearly 50% of all SI activity beneath the large-in-scale thresholds and 2.4% of total market volume.

The average daily notional among the six ELP SIs which report to TABB jumped to €1.12bn in January 2019 from €1.01bn in December 2018. Tower Research Capital led the way in February with an average daily notional of €372m, followed by Jane Street, Citadel Securities, XTX Markets, Hudson River Trading and Virtu Financial. 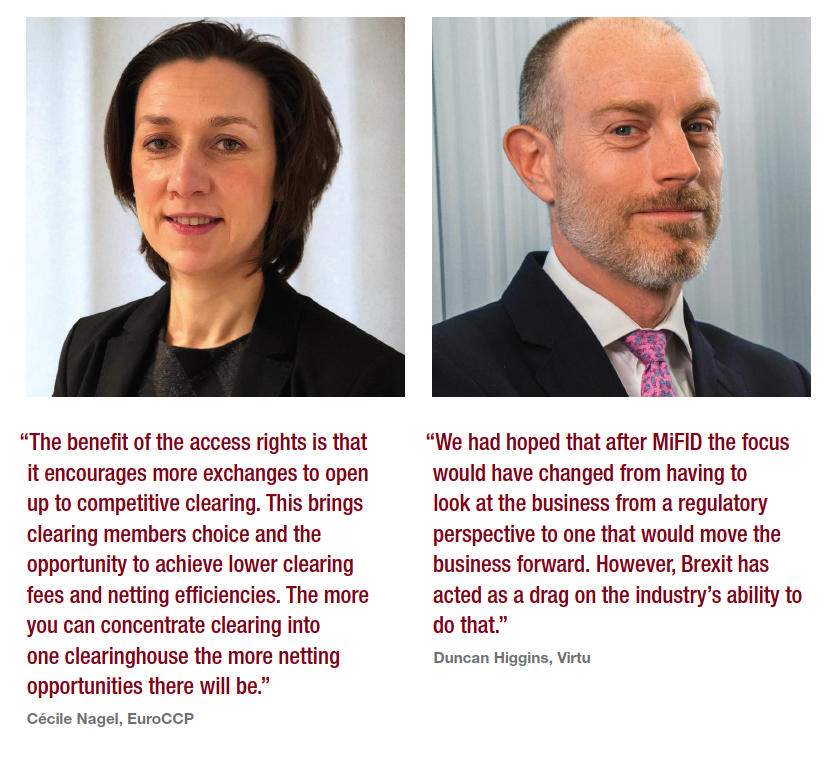 Trading is not the only function that has attracted greater competition. Clearinghouses are also jockeying for position thanks to access rights which gives CCPs the right to gain admittance into different exchanges. For example, last year Borsa Italiana granted EuroCCP permission to act as a CCP for its cash equities and exchange traded funds business.

“The benefit of the access rights is that it encourages more exchanges to open up to competitive clearing,” says Cécile Nagel, CEO of EuroCCP which clears more than 30% of the European equity market. “This brings clearing members choice and the opportunity to achieve lower clearing fees and netting efficiencies. The more you can concentrate clearing into one clearinghouse the more netting opportunities there will be.”

Although these trends will continue to play out, market participants are more focused on the fallout of geo-political tensions, US protectionist policies and slowing growth in the UK and Eurozone. Together they could put a cap on stock market volumes in the future. The UK is harder to predict because of the deadlock over Brexit. It is unclear at the time or writing what type of deal or whether there even will be one by April 12.

“One of the problems is that whatever happens with Brexit, you can’t put the toothpaste back into the tube,” says Grob. “We are already beginning to see a re-alignment of liquidity between the City of London and the European Union.”

In 2017, the Association for Financial Markets in Europe (AFME) estimated that lenders held €1.1tn (£944.8bn) of derivatives, stocks and bonds on their trading books in London on behalf of customers residing in the 27 member European Union. Fast forward to today and consultancy EY estimates that €800bn of assets has shifted from London to new banking hubs such as Amsterdam, Paris and Frankfurt. The move is expected to be permanent for the bulk because the European Central Bank has made locating significant amounts of euro business in the bloc a condition in new licenses.

Money is not only draining from the City but so too are jobs. The EY study reveals that by the end of November, 36% of the 222 largest UK financial services firms surveyed have confirmed or stated their intentions to relocate some operations to Europe. Of that figure, banks and investment banks account for 55% while 44% are wealth and asset managers.

Not surprisingly, investments in new products and services has stalled. “Financial service firms are spending most of their time on preparing for an exit which is impacting their ability to invest in new products and services,” says Duncan Higgins, head of electronic products at Virtu for EMEA. “We had hoped that after MiFID the focus would have changed from having to look at the business from a regulatory perspective to one that would move the business forward. However, Brexit has acted as a drag on the industry’s ability to do that.” 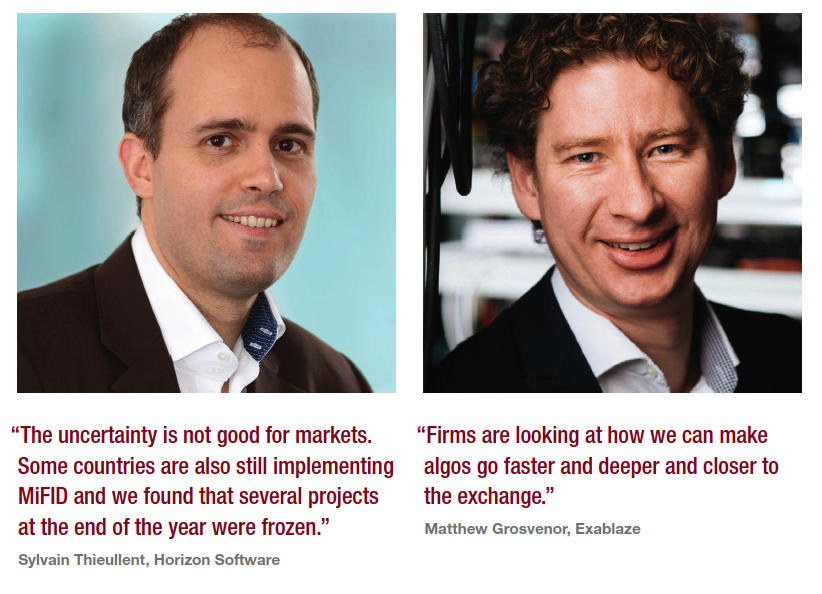 Brexit is not the only culprit. Markets have also been rattled by the ongoing trade wars between China and US, tensions between Europe and Russia as well as Europe and US, according to Sylvain Thieullent, CEO of Horizon Software. “The uncertainty is not good for markets,” he adds. “Some countries are also still implementing MiFID and we found that several projects at the end of the year were frozen.”

However, looking ahead, despite the ambiguity and short term pauses in investments, firms will continue to seek the best ways to enhance their best execution performance. “Buyside firms are still looking at technology, tools and analytics to improve their trading process and capabilities in order to deliver the best results for their clients,” says Higgins. “This is one of biggest positives that has come out of MiFID II.”

Transaction cost analysis and the latest generation of algos will continue to be a top priority. “Firms are looking at how we can make algos go faster and deeper and closer to the exchange,” says Dr Matthew Grosvenor, VP of Technology at Exablaze. 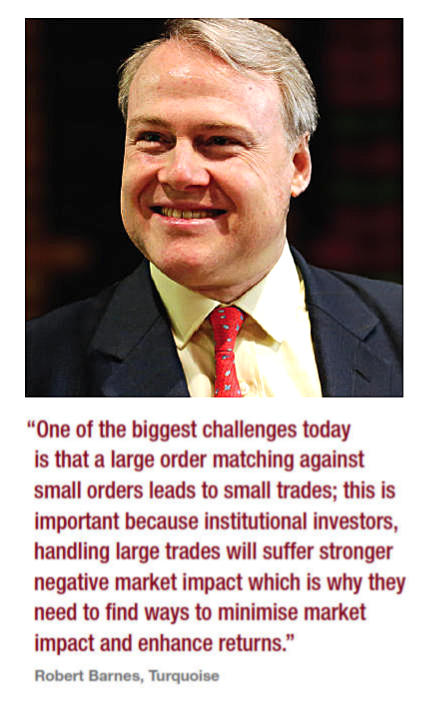 Robert Barnes, global head of primary markets and CEO of Turquoise, LSEG, also believes that market participants will continue to look at different electronic execution channels such as block trading and large in scale to source quality liquidity. This is particularly true in the current environment of low interest rate and investment returns as well as shrinking trades.

“One of the biggest challenges today is that a large order matching against small orders leads to small trades,” he says, adding that published data shows that European exchange order books have shrunk and converged to an average of around €10,000 per trade. “This is important because institutional investors, handling large trades will suffer stronger negative market impact which is why they need to find ways to minimise market impact and enhance returns.”