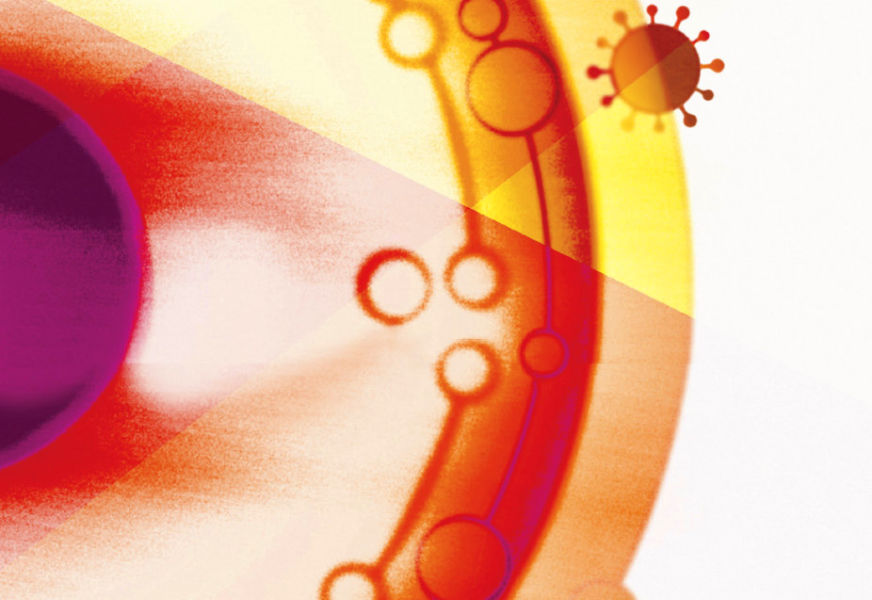 Disruptive fragmentation is nothing new, reducing its effect upon institutional trading activity, but buyside traders must stay on top of change. Dan Barnes reports.

Headlines for the US and European equity markets have been focused on ‘disruptive’ events over the past quarter, but for most traders these events have had limited effect.

“The market is already set up to handle weird levels of fragmentation,” says Eric Böss, global head of trading at Allianz Global Investors. “Of course, there is a cost to the system, and someone has to bear it, but it doesn’t derail regular business. We have had liquidity disrupted by so many different trains of regulation that we are almost used to it.”

The specific events have been very different on each side of the Atlantic. In the US, the growth of retail trader activity, which is funnelled via electronic market makers into the institutional level of trading has created challenges for analysing liquidity and pricing.

“In the US the retail trading frenzy over the last year or so creates flow that goes into every volume-weighted benchmark but is not accessible flow from our perspective,” notes Böss. “That historically has not been big enough to cause any worries, but the amount of flow we see now in several sectors and stocks has become a problem. It counts as volume but is non-accessible and therefore affects things like benchmarking and TCA measures.”

Although the phenomena are relatively new it has the potential to be a sustained source of data and that will impact existing benchmarks more profoundly. “From a strategic point of view, we are considering if we need to review our measures, or accept this as a transient phenomenon,” he continues. “If the increased volume that we have seen over the past few months persist then in half a year’s time I would consider whether or not we should change something.”

In Europe, the UK left the European Union on 1 January 2021 with a deal that did not include financial services. Prime Minister, Boris Johnson, said at the time, “I think this deal means a new stability and a new certainty in what has sometimes been a fractious and difficult relationship. But it is nevertheless going to enable our dynamic City of London to get on and prosper as never before.”

The absence of equivalence between the two jurisdictions would have meant that firms had to build operations in both, to service clients across the fence. However, the deal was so last minute that virtually all firms had already done so with the assumption that a deal may not materialise at all.

As a result, they had collectively spent a lot of money on supporting their operations with no material benefit beyond maintaining an increasing cost of doing business.

Although negotiations on financial services continue, many market participants see no immediate indication of the EU granting it to the UK. “I think equivalence is unlikely to be forthcoming and so the UK will do what it needs to, to make London viable, which is likely to involve taking a more principles-based approach to regulation,” says Anish Puaar, market structure analyst for Europe at Rosenblatt Securities.

Data from Cboe, Europe’s largest equity trading venue by volume, shows that the effect on stock exchanges, which have typically restricted themselves to trading shares listed on their own markets, has been very limited. The London Stock Exchange saw a drop of €0.15bn in January 2021 against January of 2020, however Euronext Amsterdam saw a similar decline of €0.18bn (see charts).

“The end result is that traders barely noticed,” says Böss. “As users of the trading platforms we don’t see any further liquidity fragmentation than we had seen before. There were concerns that crossing engines such as Liquidnet and ITG POSIT would break down, but we have seen no impact on flows at all. We saw no issues with routing or execution algos so from an equity flow perspective, dare I say, it has been a non-event.” 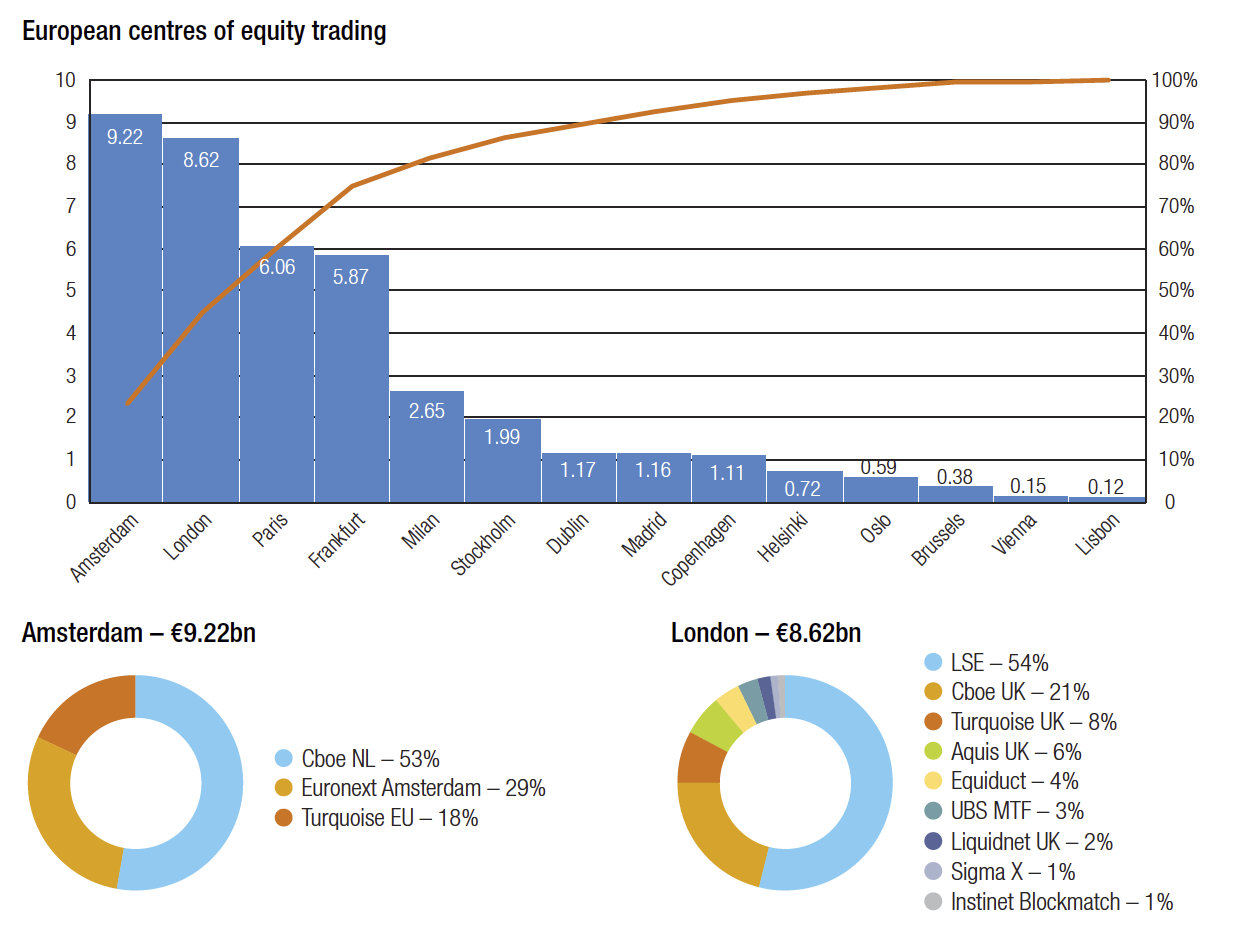 While headlines might have suggested there was at least a political impact, on the ground in capital markets the UK government seems to have other priorities. “Really, if you are looking at the loss of jobs or tax revenue to the UK it is minimal and the UK government appears to be more interested in looking at reforms to rules for listing and improving the environment for fintechs,” says Puaar. “From a market structure standpoint, the question will be whether the UK keeps to European market structure rules in order to try and gain equivalence or deviates from it?”

Fissures are appearing
While the UK and Europe are currently using the same trading rules, gaps are appearing. A split on the horizon is the automatic buy-in for failed trades, part of the incoming Central Securities Depository Regulation (CSDR) which has proven controversial due to the perceived additional costs it is expected to create for market makers. Divergence of this sort appears to be of greater interest to buyside traders who may need to reconfigure their more automated trading tools to potentially handle two sets of parameters for trading UK and EU listed stocks.

“Going into Brexit one of the biggest concerns on everyone’s mind was regulatory divergence – it is very difficult to get a handle on what that will look like,” says the head of European equity trading at a mid-tier broker, who asked to remain anonymous. “The key thing is that regulators won’t diverge for divergence sake.”

In the UK, the Financial Conduct Authority has already planted a seed for further divergence in the area of dark trading – execution in which pre-trade information is not disclosed, thereby limiting information leakage during a trade. “In terms of dark trading there could be divergence, but how people react to that would be very company specific,” says the broker.

The greatest signal for this was the publication of an occasional paper in February 2021 entitled Banning Dark Pools: Venue Selection and Investor Trading Costs. This paper was an analysis of European regulation of dark trading, specifically the introduction of the ‘double-volume cap’ (DVC) on 12 March 2018 which banned trading on a set of trading venues with no pre-trade transparency i.e. dark pools.

The paper found that first, “the use of trading venues with lower pre-trade transparency is associated with lower execution costs” and second that “the DVC did not have any significant impact on investors’ execution costs. Investors that relied heavily on dark pool trading before the ban did not experience a change in their implementation shortfall, relative to a control group of investors that did not rely much on dark trading. The same is true for the subsequent removal of the DVC.”

Although the paper made no determination about future FCA policy it did note that “it is likely that the DVC policy did not affect transaction costs because substitutes like periodic auction-based venues are available.”

Further difference was put forward by the UK Listing Review published on 3 March 2021 which made several recommendations including:

•          rebranding and repositioning the LSE’s standard listing segment to increase its appeal;

A separate, but complementary, development has been a drive amongst buyside firms to standardise the equity issuance process in order to reduce the workload. While issuance is typically a two-week process to build a book and drum up interest, it can still be challenging to manage via email, phone calls and messaging. Firms including Liquidnet have begun developing systems that would support the primary market process and buyside traders have reacted positively.

“Janus Henderson would be very supportive of a solution,” says Richard Worrell, head of EMEA equity trading at Janus Henderson. “In an increasingly electronic world, there is a clear gap here. This gap increases operational risk. We believe an electronic application tool for equity capital market (ECM) orders would help reduce that risk and improve the efficiency and accuracy of the deal process for buyside and sellside alike.”

For traders, both the US and European market structural changes are not immediate concerns but are sowing the seeds for future change. That will mean they need to maintain their ability to handle disruptive activity through a combination of skills.

Simon Steward, head of equity trading EMEA at Capital Group (see profile interview from Spring issue) says, “In addition to doing the basics well, building relationships outside of the firm, a strong regulatory understanding gives you a picture of market structure, and both understanding technology and how to articulate what you want from technology can be a differentiator for a buyside trader.”