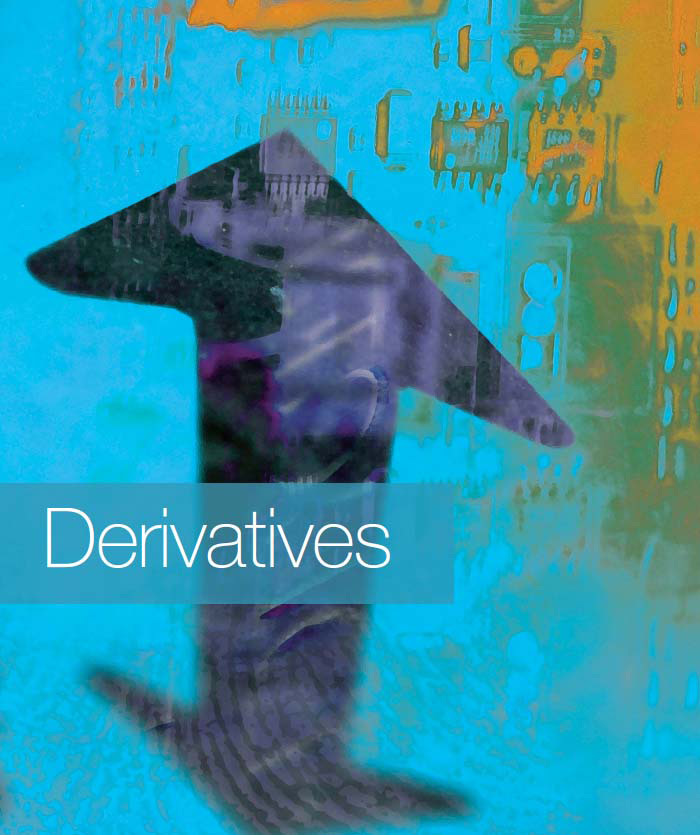 A SAFER AND MORE SECURE WORLD.

Trading in derivatives has undergone a major shift but the participants have not changed nearly as much. Lynn Strongin Dodds assesses the landscape.

As legislation intended, the derivatives market is seen as a safer and more secure place than in the pre-financial crisis days. Dodd Frank and the European Market Infrastructure Regulation (EMIR) has pushed an ever-increasing number of contracts on exchanges and through central clearing padded by a growing swathe of collateral. However, the major participants continue to dominate the landscape, although relative newcomers are starting to make their mark in the US.

Recent figures tell much of the story. The latest Bank for International Settlements (BIS) semi-annual OTC derivatives statistics for the end of 2016 sets the scene showing that the notional outstanding of all derivatives transactions was $483tn. Breaking this down, the largest chunk – $368.4tn – continues to be in interest rate derivatives (IRD) followed by $68.6tn in foreign exchange contracts, $10tn in credit derivatives swaps and $6.1tn in OTC equity-linked derivatives. The remainder includes $1.3tn in OTC commodity derivatives and a $28.3tn unallocated portion.

The BIS estimates that 76% of the IRD universe, 44% of CDS and only 1% of OTC FX notional amount was cleared through CCPs at year-end 2016. In other words, the total notional of cleared derivatives is estimated at $285tn compared with $169tn of non-cleared derivatives at the end of last year.

This shift to exchanges and central clearing, coupled with the implementation of new margin requirements for non-cleared derivatives, effective from September 2016, is also having a significant impact on the amount of collateral sloshing around the system. A new survey by the International Swaps and Derivatives Association (ISDA) estimates that around $1.41tn of collateral has been posted with CCPs or with the 20 largest market participants which were in the first wave to go live with the new margin rules. 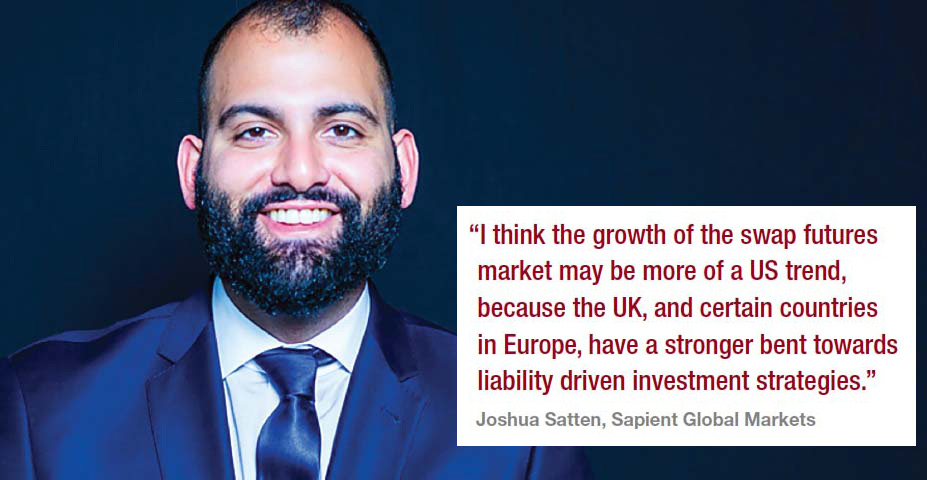 Of this amount, initial margin (IM) posted by clearing participants to CCPs for their cleared derivatives trades came in at around $173.4bn while the figure given to the 20 largest market participants for their non-cleared trades totalled $107.1bn. Figures for variation margin (VM) were an overall $1.13tn, split between $260.8bn for cleared and $870.4bn for non-cleared.

IM is being phased in with the next catchment group having joined the club in September while an ever-broader circle will be staggered in until 2020. VM, which covers all counterparties whether it be dealers, hedge funds, insurance companies or pension funds, came into force on March 2017 .

Despite the new world order of trading, a recent study by Greenwich Associates – The Next Chapter Derivatives Clearing – shows that the top five clearing firms – Citi, Credit Suisse, Morgan Stanley, JP Morgan and Wells Fargo account for 75% of buyside clearing by funds held. The difference is that unlike in the past, where cost may have been a main motivating factor, a high priority was also placed on the quality of the services, especially the risk and margin efficiency.

Incumbent clearinghouses also have a lock on the business according to a study by Clarus Financial Technology. It shows that LCH is far out in front, with the largest gross notional volume in interest rate swaps in the four major currencies of any major clearing house. In the first six months of 2017 it cleared a cumulative volume of $145tn, up 43% from the equivalent period in 2016.

The CME, on the other hand, registered a 9% hike to $8.8tn for OTC derivatives while Eurex Clearing’s $360bn cumulative gross notional is too small to register on the Clarus chart. It is though showing signs of growth and is marked out as a CCP to watch. For example, its prime month of June reported a hefty 60% jump in volumes to $88bn from the same six-month timeframe in 2016.

“We haven’t seen much change in the bi-lateral or exchange-traded space in terms of new players or products,” says Joshua Satten, director, FinTech Practice, Sapient Global Markets. “However, I think we will see more disruption in 2018 as asset managers become savvier in looking for different, previously unused products for strategies to hedge new positions more optimally.”

Not so new kid on the block

Knocking an existing player off its perch, of course, can take time. Look at the US swap execution facilities (SEFs) market which kicked off four years ago. “Interdealer brokers have retained the bulk of the market but where we are seeing change is in the dealer-to-client space (D2C),” says Radi Khasawneh, senior analyst at TABB Group. “Although, incumbents such as Tradeweb, Bloomberg and MarketAxess still have a big chunk of the business, our latest report shows that TrueEX is making headway, which has vindicated its business model. One of the reasons has more to do with the functionality of the platform, such as non-standardised products and trade compression, rather than the reallocation of market share.”

Doubts were raised over TrueEX’s future in 2014 when it captured less than 1% of total SEF volume in vanilla swaps but slowly and steadily it has built a following reaching a pinnacle in the first half of 2017. The report from TABB which used data aggregated by the FIA shows that the platform boasted the second highest SEF volume across D2C and D2D venues, and was the most traded among D2C venues, accounting for just under 16% of total notional IRD.

The most immediate challenge for TrueEX though is not how to capitalise on its new found popularity but its lawsuit with Markit where it alleged that the vendor engaged in anticompetitive conduct by terminating their relationship. The trading venue has obtained a preliminary injunction that allows its SEF to continue accessing Markit’s post-trade processing platform until March 2018, when the case is scheduled to go to trial.

While the US will continue to evolve, the main focus in Europe is the impending MiFID II regulation. As Katie Fox, principal consultant at consultancy Catalyst notes, MiFID II is far and away the most complex and detailed piece of regulation that will change the face of the market structure for trading in Europe. MiFID II will create better pre- and post-trade information that will inform the market of those trading venues where liquidity can be found.

As in the US, she believes that “people will quickly work out where the best execution can be consistently obtained and will concentrate flows to those places so products such as swaps futures may become more popular as that may be where liquidity will be found”.

Russell Dinnage, senior consultant at GreySpark Partners, adds “in 2017, and indeed since they were first introduced into the listed swaps futures market by ISDA and the CME, MAC (market agreed coupon) rates swaps futures contracts have traded in very low volumes on the CME. However, because the clearing costs associated with OTC-traded rates trading are going to increase in the near future – making them onerous for many different types of non-bank rates market participants – it is reasonable to expect that those asset managers, hedge funds and institutional investors will seek to replicate OTC rates liquidity flows, and thus the hedges associated with those flows, by using listed rates futures contracts in place of OTC trades.”

Dinnage adds that as a result, CME-listed MAC futures present an interesting option for investors to experiment with in addition to the existing range of rates futures listed on many of the global or regional futures exchanges.

“There is generally a lot of concern within the asset management firm industry, specifically, that – combined – the Dodd-Frank Act and MiFID II swaps clearing mandates, as well as the revised BCBS IOSCO margining requirements, will make the use of bank-manufactured bespoke hedging products unpalatable,” he says. “OTC trading in those products – which, at times, can be used to create an almost perfect hedge – could instead be simply replaced by higher levels of  volumes transacted in the listed futures markets.”

However, Satten expects the European market, particularly on the buyside, to develop differently than the US.

“I think the growth of the swap futures market may be more of a US trend because the UK, and certain countries in Europe, have a stronger bent towards liability-driven investment strategies,” he adds. “They are more likely to turn to the traditional bilateral OTC market to hedge out a bespoke risk position.”