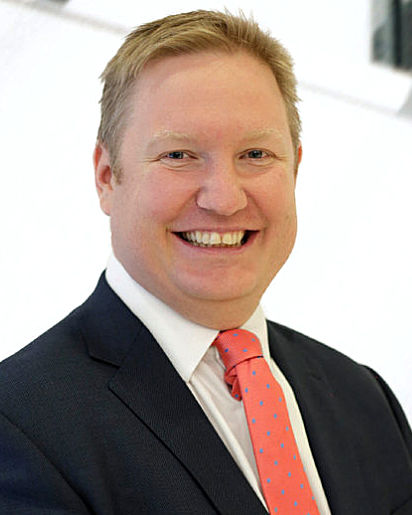 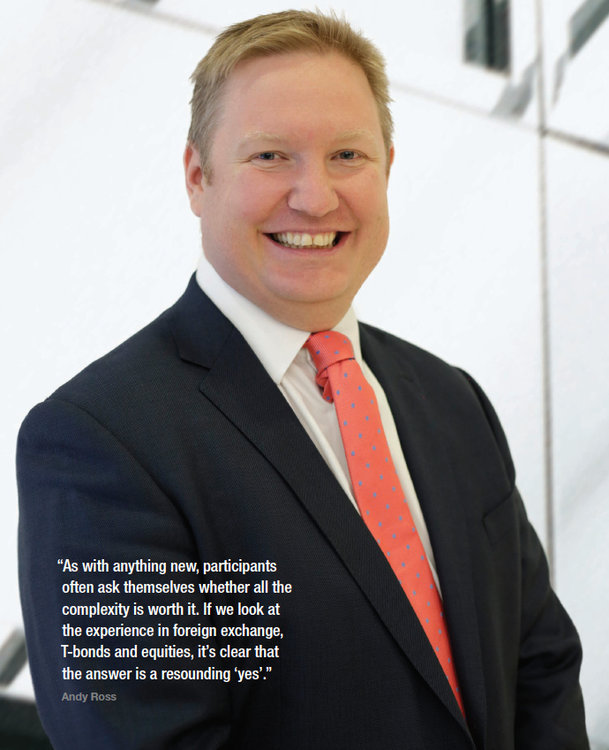 Despite understandable complaints from customers about new regulation – higher costs, more cumbersome operations, additional paperwork – one apparent result of new rules is an increase in transparency. This is not just limited to whathas been executed but, under the new MiFID II requirement for best execution, it also extends to greater visibility as to how andwherebusiness was executed.

It is my belief that all the information needed to comply with new regulatory requirements, as well as the information the new rules generate, will spur innovation. As has happened previously in the equities, foreign exchange and fixed income spaces, the best execution standard is spawning new, more efficient and creative ways to measure and analyse transactions for futures. Inevitably, as has happened in other areas, the regulatory requirement for greater transparency – coupled with the innovation that follows – leads to a greater participation in trading overall.

As CEO of a new entrant in the futures space I hear considerable grumbling about the new rules, typically from clearing firms and trading firms. Many, however, don’t mention that execution and clearing costs under the old system were continually rising, which adversely affected the users of futures, including institutional investors.

Put simply, the route to both best execution as well as greater volume is not achieved through other venues adopting a winner-takes-all approach, but by healthy competition, as is the case in many other areas, especially for over-the-counter instruments, such as fixed income and interest rate swaps.

In these cases, no one platform achieves more than 50% of total volume traded; and a choice in platforms has kept pricing competitive, while pre- and post-trade transparency has benefited clients in a controlled but impactful way.

Without competition, price quality and best execution usually deteriorates. Said another way, the answer for best price, or best liquidity for futures trade execution lies not in users electing to use one venue or another, but in their being able to take advantage of all trading platforms that compete against each other and innovate to gain volume.

In the futures market, it’s not surprising that other platforms seek to maintain their flow. Unlike virtually all other major financial sectors, the futures space has remained relatively unchanged for decades. Renewed competition promulgated by new offerings, such as CurveGlobal, will promote competitive pricing, more transparency and client-driven innovation.

New entrants bring fresh approaches to attract order flow. Innovation, therefore, ignites competition and the result is better execution for clients across platforms. The analysis below, carried out by an independent market data analytic company, shows that the price of the different monthly contracts in CurveGlobal products are at times the “best price” in the market.

Competition among trading platforms, of course, raises the issue of best execution increasing the complexity of position management. For example, market participants don’t want to open a position on one exchange if that trade would close out an existing position on another exchange. Of course, two positions can be held until expiry, and the maths to determine whether that makes sense is relatively easy. But if the costs of maintaining the two positions are too high, one could argue that it would be less expensive to consolidate the trades through a single trading venue. 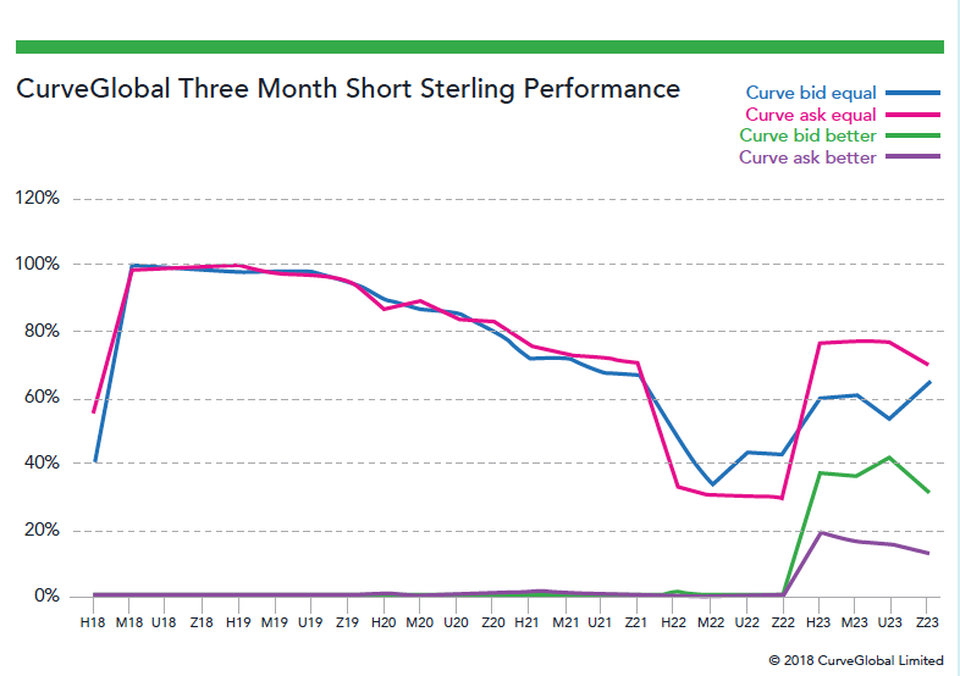 A better solution is to use the innovative tools that have been spurred, at least in part, by regulation, to take advantage of customer choice. The technological tools to manage marketplace choices – combined order books, price checking and position management, for example – are available in Smart Order Routers built into in-house systems and, perhaps more importantly, from a number of software vendors.

Similar tools that meet the demands of users are now coming to futures trading vehicles as well. In benchmarks, for example, the market and regulatory forces driving the phasing out of LIBOR and the growing endorsement by market participants of the UK’s replacement benchmark, Sterling Over Night Index Average (SONIA)*, has prompted competitive innovation.

CurveGlobal and the Intercontinental Exchange (ICE) have launched SONIA futures contracts to meet expected demand for liquidity in the new benchmark. CurveGlobal has also created and soon will launch a simple native Inter-Commodity Spread contract (ICS) between the CurveGlobal® Three-month SONIA Futures and Three-month Sterling Futures. The ICS “spread” will eliminate the legging risk when trading the spread, with simultaneous fills in the underlying futures contracts. The ability to imply tradable prices in the ICS from orders in the outright markets as well as from orders in the ICS out to the constituent legs will enhance liquidity in the new products.

As with anything new, participants often ask themselves whether all the complexity is worth it. If we look at the experience in foreign exchange, T-bonds and equities, it’s clear that the answer is a resounding “yes,” in terms of both economics and the fiduciary duty of investment professionals to their clients. 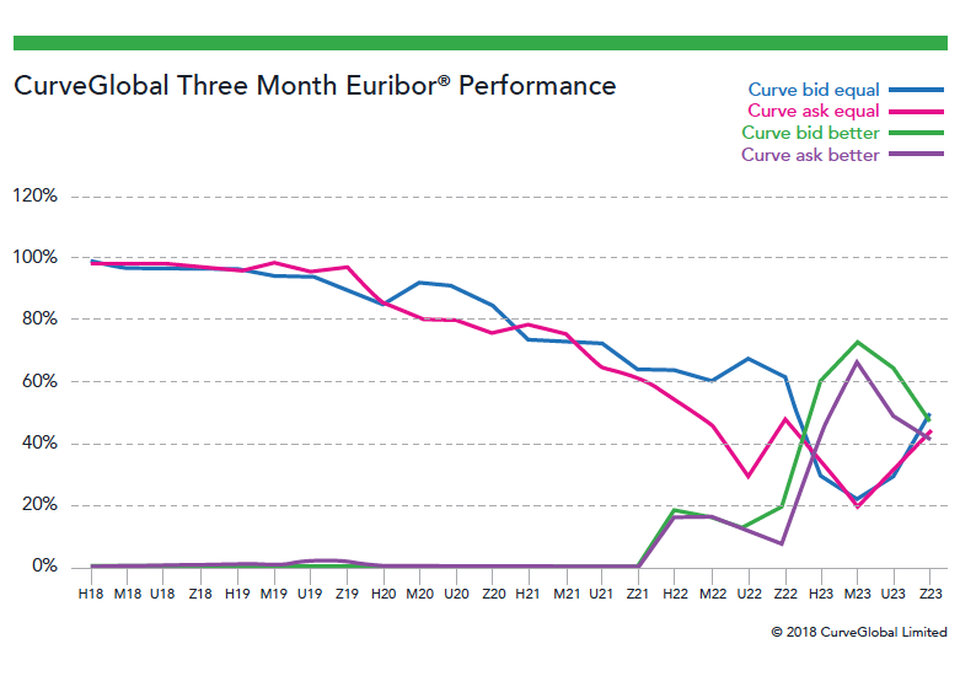 Change is never easy, but putting customers’ interests at the centre of our efforts – which in the case of futures now translates into generating better executions – is not only the right thing to do, but also good for the long-term health of the business.

Can regulation be a spur to greater efficiency and innovation? As a dyed-in-the-wool free-marketeer, it pains me to say that sometimes such is the case.

CurveGlobal is an interest-rate derivatives platform that is a venture between London Stock Exchange Group, Cboe and several leading dealer banks.