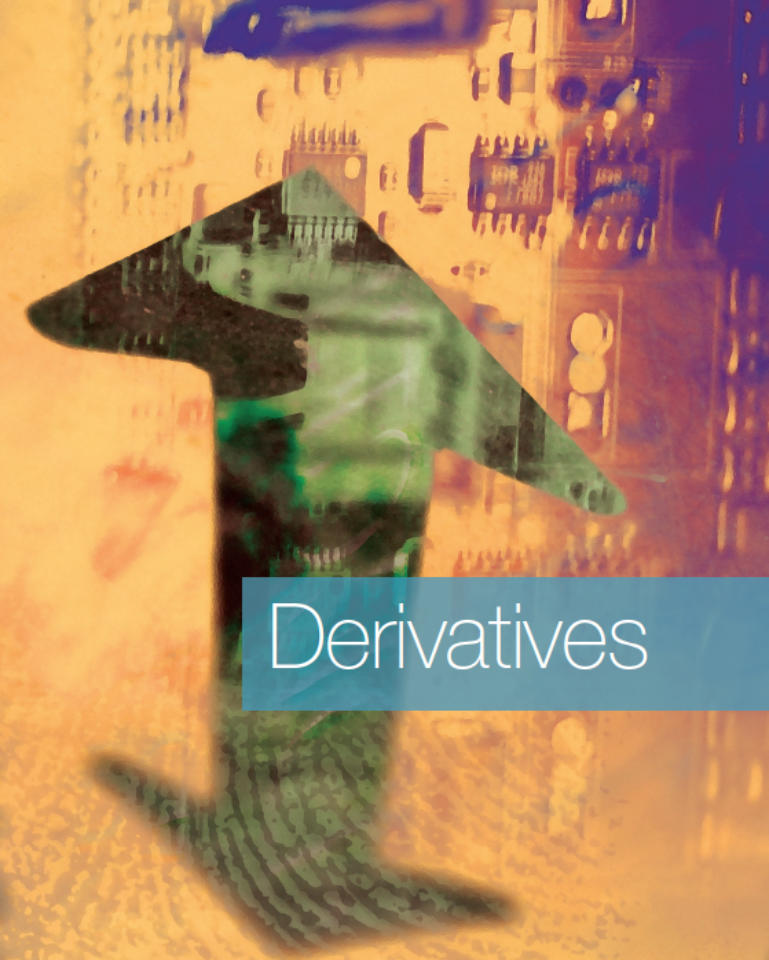 Lynn Strongin Dodds assesses the ongoing trends and challenges of regulation on the derivatives industry.

There are many moving parts sweeping over the derivatives landscape but there is no doubt that regulation, starting with Dodd Frank and continuing with MiFID II, is having a profound impact. It is not only changing the way market participants are trading and clearing but also how they are leveraging technology to enhance processes and data management.

The latest survey for over the counter (OTC) markets by the Bank for International Settlements says it all – the gross market value of OTC derivatives contracts fell to $11tn by the end of 2017, down 15% from the first six months of the year, to a level last seen in 2007. The most recent slump in the cost of replacing all outstanding contracts at current market prices marks a continued retreat from the $21tn seen at the end of June 2016.

Moreover, the gross market value of OTC interest rate derivatives fell further in the second half of 2017, to $7.6tn – also the lowest ebb in 11 years. The amount denominated in all major currencies also declined during this period, reflecting rises in long-term yields, which reduced the gap between market interest rates on the reporting date and those prevailing at contract inception.

By contrast, a separate study by the World Federation of Exchanges shows that last year exchange traded derivatives (ETD) volumes overall were up 0.6% on 2016, driven largely by increases in volumes traded of single stock options, stock index options and interest rate futures. Interest rate derivatives seem to be the most popular with the latest European Securities and Market Authority report revealing that they represented over 80% or Ä166tn of the total Ä200tn volumes. In addition, for swaps, the top 10% of transactions accounted for more than 50% of the traded volume.

The UK was not only the largest market but as of September 2017, almost half of all the 152 MTFs were registered in the country with the remainder distributed across the rest of the EU.

Travel in one direction

The migration to the exchanges is only expected to continue as MiFID II beds down. In fact, a new report by TABB Group – Selective RFQ – Voice Bridging E-Trading – notes that participants are becoming increasingly confident that further electronification of fixed income derivatives markets will stem from a range of ancillary factors such as standardisation of products and services. Improved automation will also translate into better trading workflows and decision-making capabilities.

Due to the ongoing regulation of trading, best execution and more stringent collateral obligations “there has and will be an ongoing shift of transaction-based trading onto automated venues such as MTFs, and less voice trading,” says Simon Davies, senior consultant at Field Consultancy. “This reduces the risk but does add complexity to the data processing component. Once the dust has settled, I think we will see people focus more on the most efficient ways to meet the different requirements.” 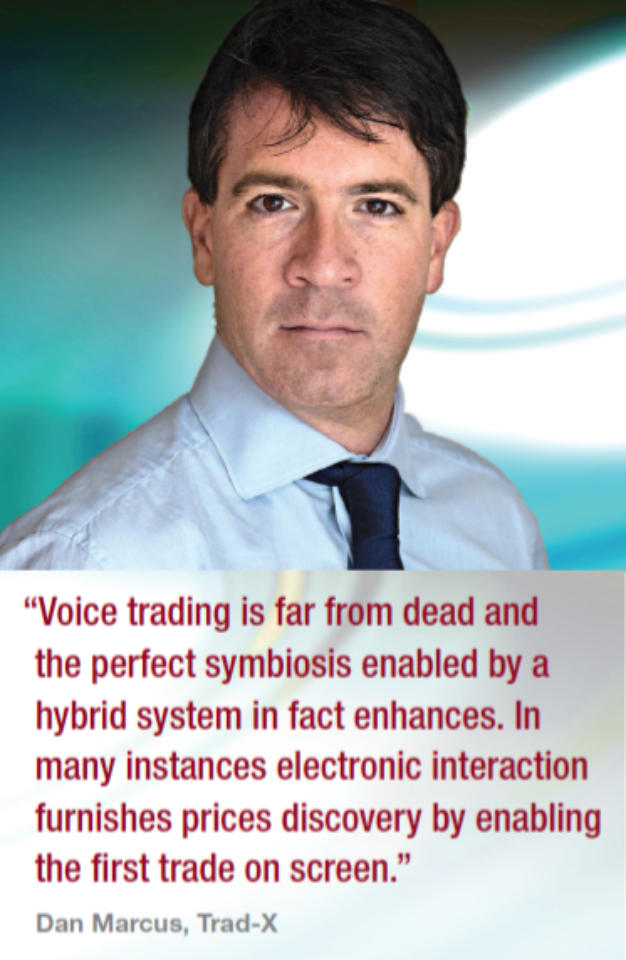 Dan Marcus, CEO of Trad-X also sees a significant uplift in electronic trading, but the drivers are not only regulatory reform. “Although it is easier from a compliance and audit trail perspective to trade electronically, we are also seeing a generational change,” he adds. “We are seeing young technical traders more used to the efficiency and immediacy of electronic execution. However, voice trading is far from dead and the perfect symbiosis enabled by a hybrid system in fact enhances. In many instances electronic interaction furnishes price discovery by enabling the first trade on screen. A follow up voice execution enables suitable size discovery, thereby mitigating market impact and reducing slippage. The result is a fully compliant system that works effectively for the market.”

Tom Lehrkinder, author of the TABB report believes that the Central Limit Order Book (CLOB) model is not the answer to all electronic trading solutions and that selective request for quote (RFQ) goes a long way to comply with the MiFID II requirements around best execution. “The ability to preserve key elements of the OTC trading workflow while leveraging the benefits of electronic price formation is a key advantage for market participants,” he adds.

Tradition, as well as stalwarts Tradeweb and MarketAxess, have been ahead of the curve with their hybrid platforms but European venues are hoping to catch up with their own home-grown crossbreed offerings. For example, last December, Deutsche Börse’s Eurex launched EnLight, a RFQ platform which allows banks and brokers to selectively contact market makers to find a trading counterparty.

While the trading dynamics of derivatives will continue to focus the mind, coming to grips with the data burden – present in almost all other sets of regulation – is also consuming time, money and resources. Detailed reporting of trades across a range of asset classes is now required but, as with trading, asset managers just crossed the MiFID II finishing line and are planning to enhance their services. 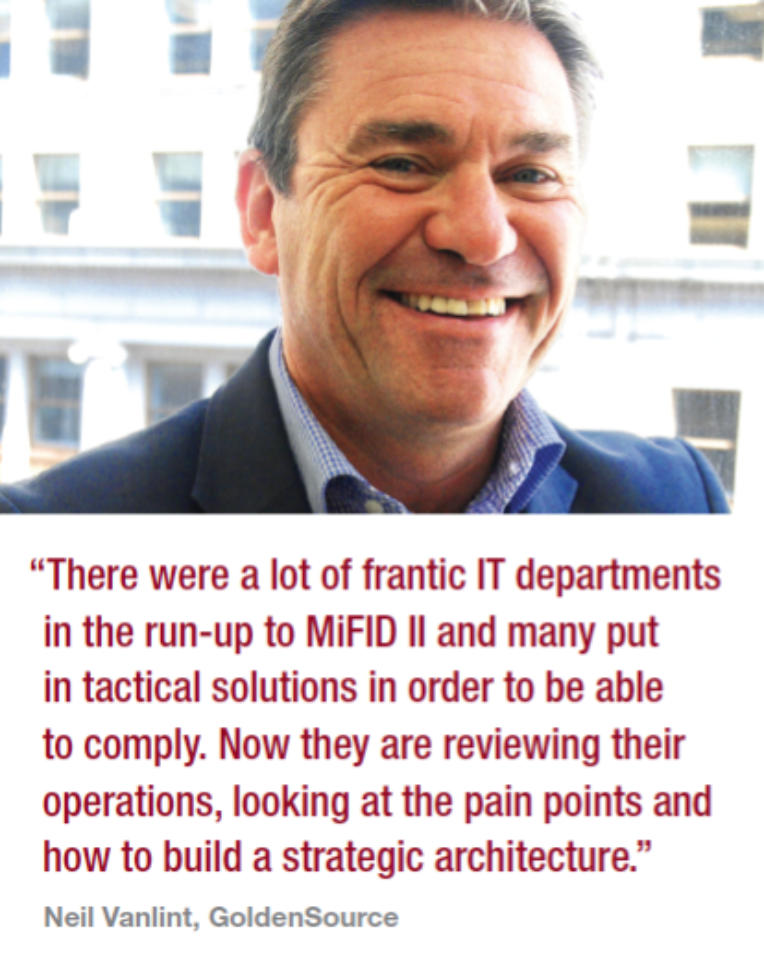 “There were some last minute changes which did not leave asset managers enough time to fully implement the rules”, says Neil Vanlint managing director, EMEA and Asia at GoldenSource. “There were a lot of frantic IT departments in the run-up to MiFID II, and many put in tactical solutions in order to be able to comply. Now they are reviewing their operations, looking at the pain points and how to build a strategic architecture. It is still early days and it takes time to get it right.”

Dario Crispini, CEO of Kaizen Reporting believes that the “biggest challenges are data quality, reporting accuracy and getting a complete picture,” he adds. “There is a lot of choice in terms of the number of reporting systems but choosing one is not the end of the story. There needs to be a strong control and governance element.”

Alexander Dorfmann, director of product management on the financial data side of SIX, also adds that firms are still getting to grips with International Security Identification Numbers (ISINs), a 12 character code, that is now to be used for the reporting of derivatives as well as legal entity identifiers (LEIs), which under MiFID requires investment firms to only trade with counterparties holding LEIs. “The saying is no ‘LEI, no Trade’, so firms need to have the identification or else their internal compliance and risk management function will not let them do the trade,” he adds.

Not surprisingly, the new derivatives world order has been a breeding ground for new innovations and this has certainly been the case with blockchain. There is a lot of hype but as Val Wotton, managing director at DTCC Deriv/SERV, puts it, rapid advances in distributed ledger technology (DLT) have proven its ability to provide a single, immutable and commonly accessible record of transactions among multiple parties, thereby increasing transparency and reducing costs for market participants.

As a result, he says the industry is already discussing whether DLT can enable a shift to searchable databases and full regulatory access. DTCC is in the process of re-platforming its Trade Information Warehouse (TIW) for CDS transactions from a mainframe to a DLT system with the aim of enhancing efficiencies and generating new value-added services. Standardised process flows and data models make credit derivatives an ideal use case and provide an opportunity to test the technology with appropriate and meaningful scale.

“For DLT-based OTC derivatives platforms to be deployed successfully however, it is imperative to avoid past mistakes, utilising technology, governance and data standards to ensure compatibility between ledgers and prevent any local customisations made during development and implementation from compromising end objectives,” he adds

However, he acknowledges that while DLT offers a promising solution for meeting the challenge of global data harmonisation in the OTC derivatives space, the case for a DLT-based approach may take some years to evolve. “It is also worth noting that even without DLT technology, centralised data warehouses conforming to consistent standards could help make data reporting less complex and costly,” he says.