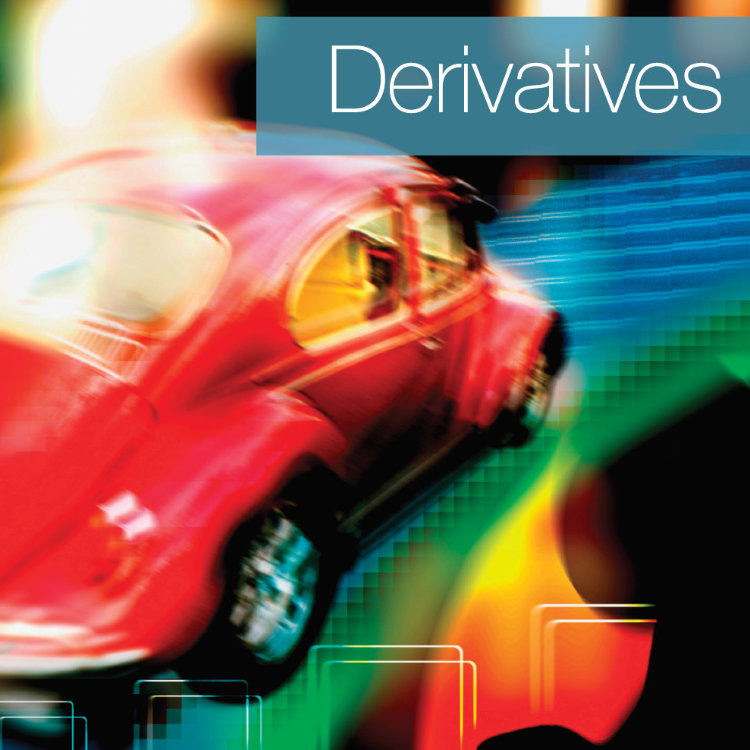 BUMPS IN THE ROAD.

Lynn Strongin Dodds looks at how the derivatives market has fared in the pandemic and the challenges ahead.

As with all asset classes, the pandemic has proven difficult for the derivatives industry although it has not been the only hurdle on the horizon. Market participants are also dealing with the end of Libor (see ‘The end is nigh’), the final phases of the uncleared margin rules (UMR), Brexit and a renewed focus on operational resiliency.

The difference with Covid-19 is that it was a black swan event that no one could have predicted. It took market participants completely by surprise which is why volatility reached unprecedented levels in March as many parts of the world shut down and sent workers to makeshift home offices. 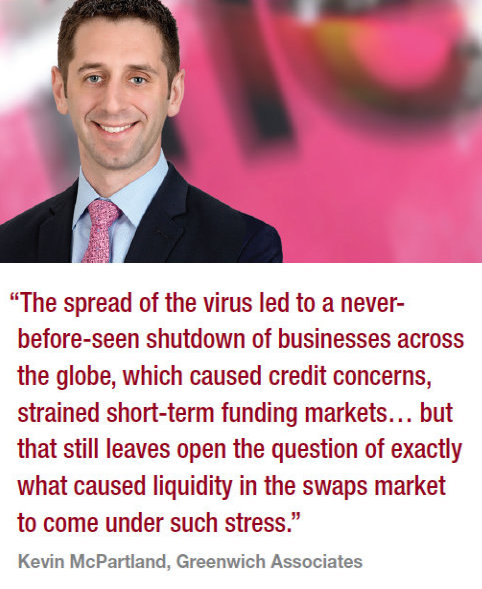 The numbers say it all. Figures from the FIA, a trade group that represents banks, brokers, exchanges, and other firms in the worldwide derivatives markets, showed that the total number of contracts traded on global derivatives exchanges surged by 43.2% in the first three months to an all-time quarterly record of 11.41 billion compared to the first quarter last year.

Meanwhile, the International Swaps and Derivatives Association (ISDA) revealed that initial margin collected by global central counterparties (CCPs) for exchange-traded derivatives surged by 81.7% in the first quarter from the final three months of 2019 as Covid-19 took hold.

Not surprisingly, before the collective global central bank lifeline, liquidity took a hit in the interest rate swap and FX derivatives markets. Bid-ask spreads widened, orders became smaller and buyside firms reverted to the phone, according to a separate study by ISDA and consultancy Greenwich Associates – The Impact of Covid‑19 and Government Intervention on Swaps Market Liquidity.

“The spread of the virus led to a never-before-seen shutdown of businesses across the globe, which caused credit concerns, strained short-term funding markets, and then in turn, caused investors to panic – that much is clear,” said author of the report Kevin McPartland, managing director and head of research for market structure and technology at Greenwich Associates. “But that still leaves open the question of exactly what caused liquidity in the swaps market to come under such stress.”

As with most markets, he pointed to a confluence of factors such as the sudden demand for cash which triggered a massive selling of usually safe and liquid assets, such as government bonds. This in turn, caused yields to surge, negatively impacting major economies. Strong demand for US dollars also caused strain in the foreign exchange market, driving the value of the dollar up sharply, while liquidity disappeared across a variety of currency pairs, he added.

False dawn
Fast forward to today and markets have calmed down from their incredibly elevated levels, but they are still jittery as the virus continues to make waves. The FIA’s first half report card reveals that global futures and options trading grew by 32% to a record-setting 21.9 billion contracts compared to 2019.

“If you go back to February and March, there was a huge spike in volatility and the volumes were exceptional,” says Will Mitting, founder and managing director of Acuiti. “Activity tailed off in April, but conditions have and will remain challenging this year. What Covid-19 did was expose the operational weakness of the back office. They came under significant strain during Covid‑19 and the switch to remote working. There have been hundreds of millions invested in the front office, but the back office has lagged behind and they still rely on too many manual processes.” 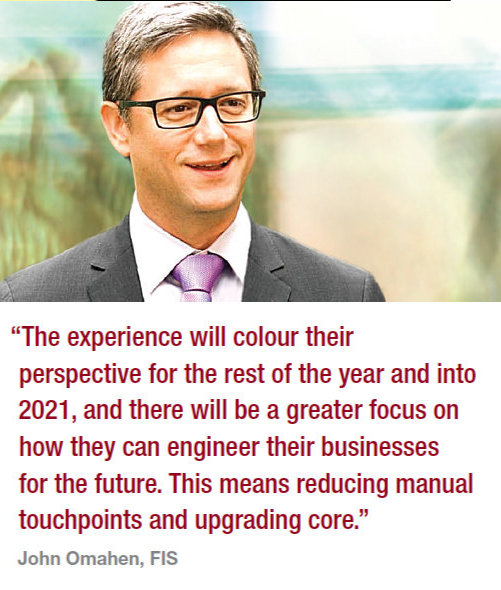 John Omahen, head of product strategy for Post Trade Technology, Capital Markets, FIS, agrees, adding that “the experience will colour their perspective for the rest of the year and into 2021, and there will be a greater focus on how they can engineer their businesses for the future. This means reducing manual touchpoints and upgrading core processes so that they can more readily adapt to market changes and future spikes in trade volumes.”

More specifically, in the middle and back office, Omahen points to the need for greater automation to increase efficiency, as well as greater adoption in general of cloud- based technologies that enable market participants to work remotely. Firms will need to increase internet bandwidths for employees, as the speeds at home are insufficient for traders to keep up with rapid changes in the market, and for back-office staff to process trades as quickly as possible,” he adds.

Taking it up a gear
Malavika Solanki, member of the management team at the Derivatives Services Bureau, believes that rationalisation, digitalisation and standardisation of data will be the mantra going forward as firms are under more margin pressure and need to focus on core competencies and value-add opportunities.

“People will take a deep dive into their data architecture and look to create a golden source to avoid duplications,” she says. “There will also be an increased focus on digitalisation and a shift to the cloud for greater efficiencies. I am also seeing more interest among market participants for standardisation and alignment of their data.”
While the pandemic may be uncharted territory, there are still familiar themes playing out in the derivatives landscape. The uncertainty over Brexit has been hanging over markets for months and the result of the negotiations is still too difficult to predict, which is why markets are jumpy. Less nerve-wracking is the ongoing regulatory journey which is seemingly endless. The most pressing items on the regulatory agenda are Libor and the transition to reference free rates, according to Christian Lee, partner at consultancy Sionic.

“This is a big event not only for banks and brokers but also for asset managers and insurance companies,” he says. “I do not think UMR is quite as significant – although challenges remain, we are in the final phases of the regulation – the requirements have been known for many years and the impact is on the final tranche of smaller firms.”

Trevor Negus, product manager for TLM Collateral Management at SmartStream agrees, adding, “There was a pause for a period which is why there was an extension but I did not see any firms take their foot off the pedal. There is still a lot of work to do. One of the biggest challenges for the smaller firms is to be able to calculate initial margin using the ISDA SIMM (standard initial margin model). They also need to ensure their custodial and legal documentation as well as collateral management systems are in place.”

UMR involves the mandatory exchange and segregation of initial margin (IM) on non-cleared derivatives trades, impacts interest rate, credit, FX, equity and commodity derivatives. The disruption caused delays to the latest batch of players – with an aggregate average notional amount (AANA) of more than $50bn. They now have to be at the finishing line a year later than planned – September 2021 – followed by those with an AANA of over $8bn who will also have an extra year – September 2022 – to get their operational houses in order.

The first cluster of four were the sellside and larger buyside firms who had an aggregate average notional amount (AANA) greater than €3tn followed by €2.25tn, €1.5tn and €750bn tiers.