Europe’s consolidated tape proposal is a start, but many details still need to be filled in for its value to be assessed. Lynn Strongin Dodds reports.

A consolidated tape (CT) in the European Union has been a longstanding goal of brokers and asset managers. It was mooted in MiFID I and mandated in MiFID II but failed to materialise. This is about to change with the European Commission’s draft laws for a stronger financial services industry in the wake of Brexit. Although market participants have breathed a sigh of relief that a tape is firmly on the agenda, there will be several kinks to iron out before it is fit for purpose.

The European Securities and Markets Authority (ESMA) will appoint separate consolidated tape providers (CTPs), one for each asset class, for a five-year term. The regulator will also be responsible for supervising the process as well as ensuring trading venues, Approved Publication Arrangements (APA) and systematic internalisers (SI) make the data available on a reasonable commercial basis. 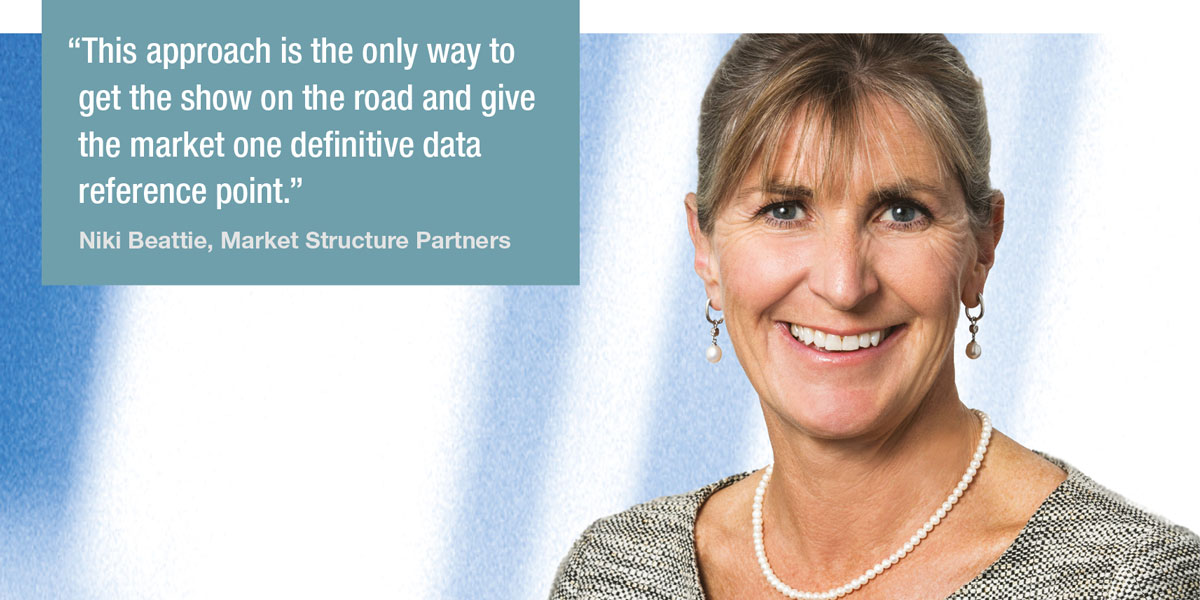 Niki Beattie, CEO of Market Structure Partners, believes that ESMA appointing a CTP for post trade data is only the first step with pre-trade data being the longer term gameplan.

“This approach is the only way to get the show on the road and give the market one definitive data reference point,” she says.

The draft document mandates the region’s 476 exchanges and trading venues – many of which trade the same securities –to make mandatory contributions to tapes for stocks, bonds, derivatives and exchange traded funds (ETFs) in return for “fair remuneration” or “a guaranteed minimum revenue”.

Market data sources would have to make their offerings standardised and available to market data aggregators, with data released as close to real time as possible which translates into milliseconds for stocks and roughly five minutes for bonds. 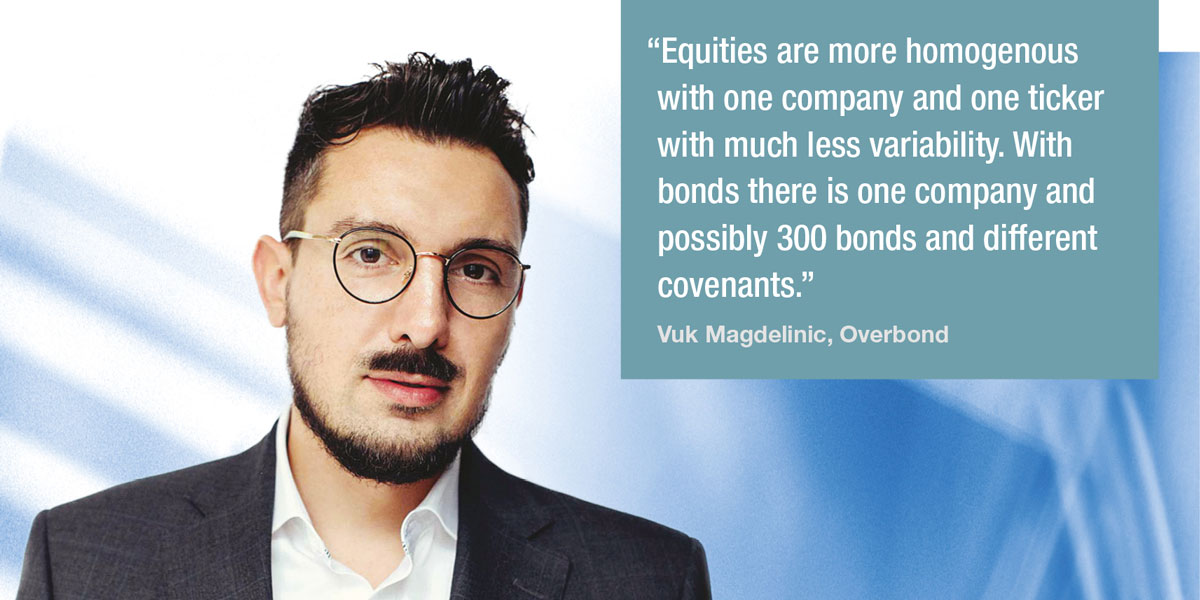 “Structurally, from a data aggregation, mapping and reporting perspective, it made sense to have two tapes,” says Vuk Magdelinic, chief executive of Overbond. “Equities are more homogenous with one company and one ticker with much less variability. With bonds there is one company and possibly 300 bonds and different covenants.”

Rebecca Healey, managing partner and founder of Redlap Consulting and Co-Chair of the FIX Trading Community’s EMEA Regulatory Subcommittee, adds, “The fact that there will be a CTP for each asset class is welcome recognition that a lift and replay of an equities tape was never going to be adequate when looking at bond trading.”

She adds that the FIX Buy-Side Fixed Income Consolidated Tape Working Group has already made suggestions in terms of what additional fields could be included to produce a consolidated tape of value for bonds. 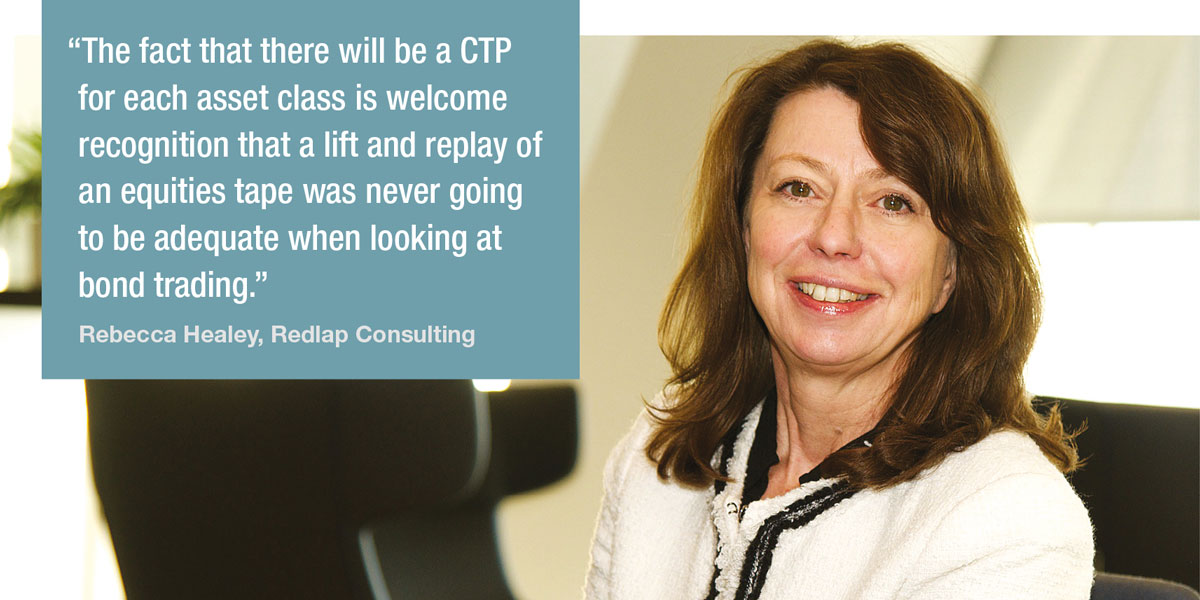 “Mandating FIX MMT will also obligate venues and investment firms to meet the necessary data standards which will significantly enhance data quality – although this will of course be dependent on those market participants who are not currently voluntarily providing the correct information being penalised if they continue to do so,” she says.

The FIX Market Model Typology (MMT), is a well-established voluntary industry data standard, which was set up post MiFID. It is widely used by venues and market participants to map legacy trade flags to a standard set of codes, making it easier for published market data to be compared and consolidated by investors.

The other notable proposal was reforms to the transparency regime which has been a bone of contention since MiFID II was implemented in 2018. In order not to expose liquidity providers in fixed income to unnecessary risk, the Commission said it will allow transaction volumes to be masked for a short period of time, although not longer than two weeks. In addition, national supervisors will no longer be able to use their discretion to apply supplementary deferrals.

“This will end the current scenario, except in sovereign bonds, where each nation can set its own deferral rules and will make the data more useful and comparable across the entire market,” says Beattie.

Healey adds, “The current complex matrix of individual Member States’ deferral mechanisms has only accentuated opacity in relation to what bonds have traded where. Although there is still a carve out for sovereign bonds, the steps towards greater standardisation will inevitably make what data is available more useful in making comparisons across the market.” 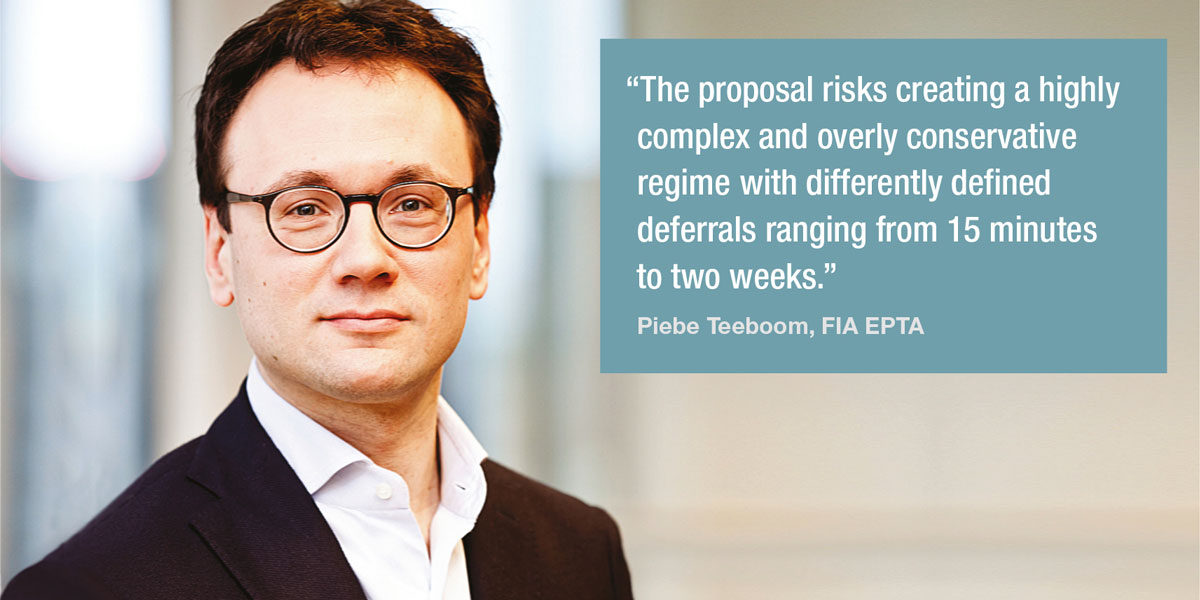 FIA EPTA recommended a blanket 15-minute deferral as an appropriate length even for large-size transactions. Teeboom said that it should be jointly implemented with an effective volume masking regime, ensuring that liquidity providers are not exposed to undue risk and are still able to effectively hedge even after the deferral window has expired since the market does not know the full-size of the large trade. Opinions are less divided over the data challenges inherent in fixed income. 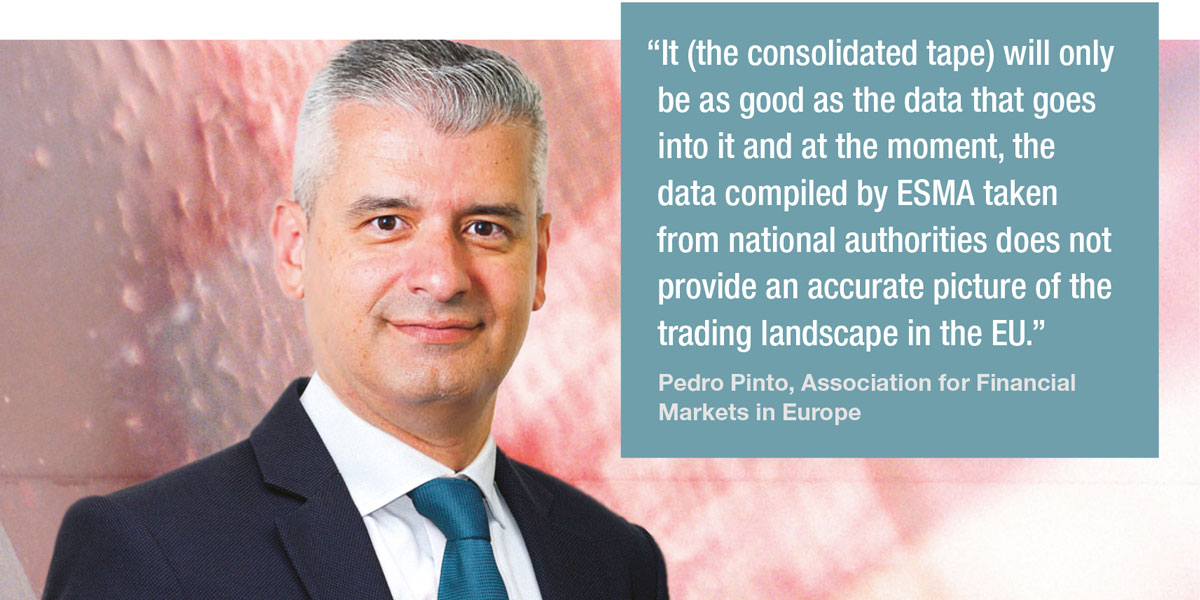 Pedro Pinto, head of MiFID at Association for Financial Markets in Europe (AFME) says “Our position is that we are very supportive of the consolidated tape, but it is important to get the right infrastructure in place underpinning the tape. It will only be as good as the data that goes into it and at the moment, the data compiled by ESMA taken from national authorities does not provide an accurate picture of the trading landscape in the EU.”

Magdelinic agrees adding, “The big question is what will be the depth and breadth of the coverage. We need to look at what is reported and how much is being masked and the speed at which the data will go which is very important for algos and analytics.”

It will not be easy given the opaqueness and infrequent trading of many securities in the bond markets. As Paul O’Brien, founder of Glimpse Markets, puts it the existing regime is overly complicated, and many participants find it difficult to determine if and when a particular bond will appear on a post trade APA feed. 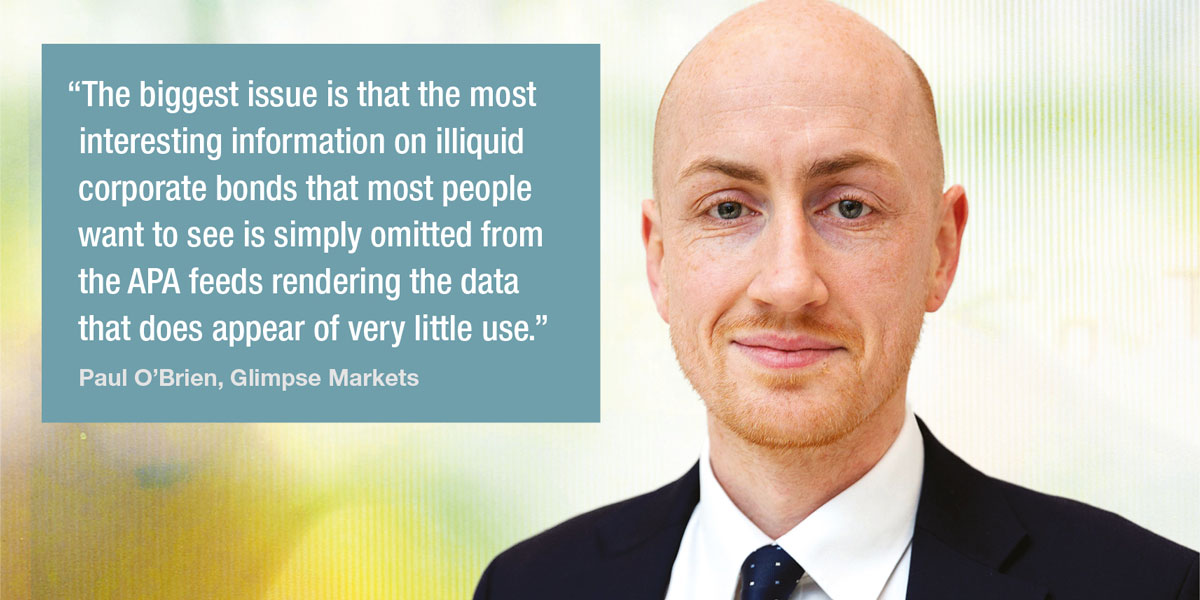 “In the last ESMA update, only 448 liquid bonds were subject to MiFID’s transparency requirements,” O’Brien says. “The biggest issue is that the most interesting information on illiquid corporate bonds that most people want to see is simply omitted from the APA feeds rendering the data that does appear of very little use.”

It can also be difficult to discern liquidity profiles, according to Neil Ryan, regulatory consultant at FINBOURNE “There are several trade fields that include flags, but the formatting can be inconsistent and when we consolidate these, we see different practices. For instance, one APA may flag a transaction as ‘illiquid’ while another reports the same asset’s trades as liquid.”

Beattie also argues that there is a need for better governance, oversight and standards which in turn would lead to better data. ESMA is being asked to check the ability of the bidders to provide good quality data.

“However, there is no centrally agreed penalty mechanism for bad data submissions nor is there any agreement on how such a system could be implemented across different countries,” she adds.

It is too early to predict whether the tape will be a success. The proposals have a long and winding regulatory process to go through. They need the green light from the European Parliament and EU members states to become law. This typically involves compromises and changes along the way. Optimistic estimates are that the Commission will go for progress rather than perfection and it could take up to three years. Their more negative peers predict five to ten years while there are of course those in the sceptical camp who think the timeframe could be even longer at a decade.