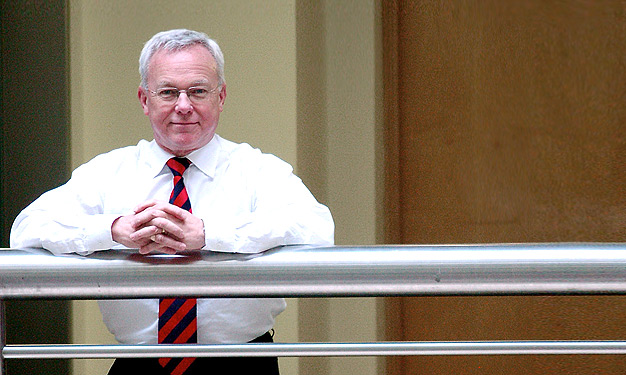 CLOUD AND THE GLOBAL TRADING LANDSCAPE.

One aspect of the financial sector is that not everything happens in the same way at the same time. While one area of activity can rocket ahead in terms of its speed, another area of activity can continue to work incredibly slowly. In terms of speed, we’re all aware of low latency requirements, ultra low latency requirements, proximity hosting, etc., – all things that have become fundamental to financial markets over the last 10 years. However, the technology approach taken for most of the activities of much of the financial community is still decades old in its methodology.

Alexander Graham Bell connected together two communicating parties with a pair of wires and a box at each end. Other pairs of communicating parties each needed another pair of wires and another pair of boxes. The more people who you wanted to communicate with, the more boxes you had. Back then, the box was a telephone – today, it’s a network router. The result back then was spaghetti networks – a result that still lives with us in the 21st-century. You only have to look at the equipment racks behind any dealing room to recognise the pattern. Financial institutions have continued to link to each other using a pair of boxes and a pair of wires for each counterparty, building and using multiple spaghetti networks that have continued to add to their operational costs and that have often increased operational risks.

It was just two years after Alexander Graham Bell patented the telephone that the first commercial telephone exchange went into operation. With just one box and one pair of wires, each user could talk to anyone else – and today that means anyone else anywhere in the world. Cloud approaches to communication are taking the financial markets sector in exactly the same direction.

Requirements of sell-side firms and their clients have become more complex. Just being able to trade on the local stock exchange has stopped being a justification for existence for trading institutions. “Best execution” regulations today mean that sell-side and buy-side firms also need to be able to trade on ECNs and MTFs, and not only domestic ones. Client requirements mean that sell-side firms have to be able to get deals done on exchanges and execution venues in other countries as well as in other asset classes such as FX. Brokers want their clients and counterparties to send orders electronically wherever possible, irrespective of what country they may be in. Gradually, there has been a growth in the need for “many to many” communications, rather than the “many to one” communications that have traditionally been the structure of financial markets. Added to this is the understanding and appreciation by market participants that “many to many” communications is not only normal but should be expected; their use of the public Internet at home has shown them what is possible, and today it is harder for them to understand why they cannot achieve the same thing when it comes to trading, clearing and settlement.

Networks are used for communication, but  they can also be used to block communication. Traditionally the cost of building an international network to reach customers was so expensive that it acted as a barrier to competition. Competitors would also need to invest heavily in networks and technology in order to try to reach the same target customers. When the public Internet went commercial in 1993, it changed this whole concept. At a much lower cost an institution could reach many times more customers, and owning a network actually became a liability as established financial institutions were left running and maintaining legacy networks and technology while new market entrants could be more agile and competitive and did not have these additional operating costs to bear.

There has also been the approach of using networks to lock in customers. It can be expensive for a customer to implement the necessary technology to link to a supplier’s network. This cost can be a barrier to customers adopting other suppliers where that also requires the implementation of additional technology to connect to those additional and separate supplier networks. This is a practice that still continues today, and examples can be seen in many areas of the financial trading environment, e.g. bank to client, exchange to member, market data vendor to customer. However, the widespread use of the public Internet has also changed customers’ willingness to have these additional costs thrust upon them in order to access the services of exchanges, banks, brokers, CCPs, etc.

At home, someone using the public Internet pays for a connection to the Internet and expects service providers that wish to get that customer’s business to use the customer’s existing Internet connection. The idea that a broker or a bank looking for business from retail customers might insist that they implement a separate Internet connection to access the broker’s online trading facilities or the bank’s website would both seem ridiculous. Yet financial institutions are still often faced with the situation that they have to implement an additional network connection for each service provider who wants their business.

For some years now the world’s largest banks have started to take greater ownership of how they link with the outside world. To service providers, they say “This is my network connection – you will deliver your services down my network connection”. In this way they can rationalise the technology that they have to implement in order to receive services from multiple suppliers. Two separate studies by Yankee Group over the last 10 years have shown that this approach can save the financial institution 50% or more of its total cost of operation of communications, not only over the long term but in year 1 and year-on-year thereafter. The savings are primarily in the reduction of internal operational costs for the financial institution rather than in the reduction of the cost of network connections, network hardware, and so forth. This means that those savings are within the control of the financial institution itself, and are therefore much more achievable than if they were under the control of external service or technology providers.

higher levels of service to their customers, e.g “best execution” regulations, thereby increasing operating costs, putting greater pressure on profit margins and forcing increased operational efficiency. The economic crash has simply taken money out of the institution’s business so that it has less money to use to create a profit. Whatever the cause, financial institutions can no longer ignore the operational efficiencies and cost savings that cloud approaches can deliver.

The efficiency, and therefore the success, of a cloud approach is dependent on the size of the community that uses that cloud and on the community’s volume of use of that cloud, as a community itself creates a “virtuous spiral” that benefits all existing users of the cloud as well as all newcomers that join it.

A MURKY PICTURE. While no one refutes the benefits of the cloud, fears remain. Heather...
Read more

The Cloud : An introduction

INTRODUCTION TO THE CLOUD. Lynn Strongin Dodds, Editor The financial services industry is often at the...
Read more

A MURKY PICTURE. While no one refutes the benefits of the cloud, fears remain. Heather...
Read more

The Cloud : An introduction