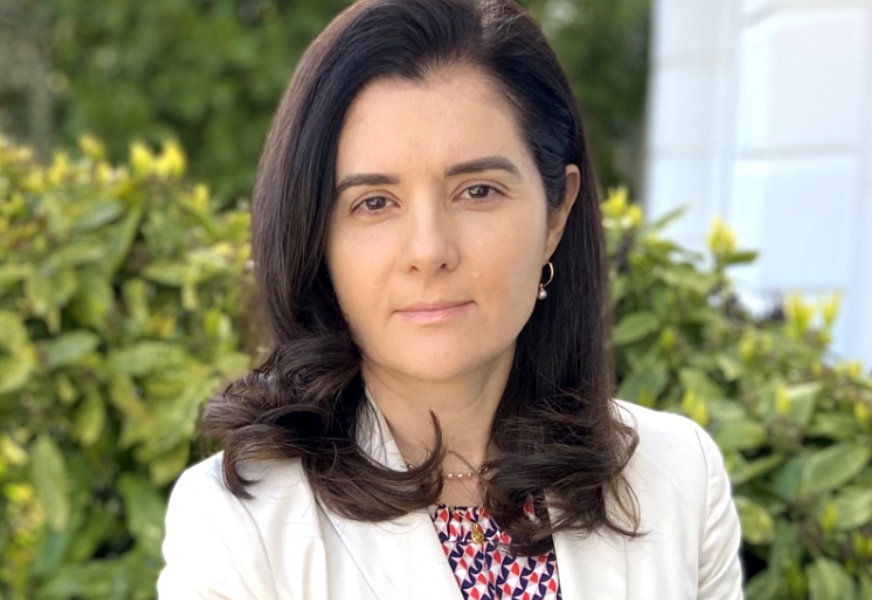 When Gabriela Herculano, Chief Executive Officer and Co-Founder at iClima Earth, was 18 her mother took her to the very first COP, the United Nations Climate Change conference. So it is fitting that she is leading a green fintech that focuses on helping investors find “climate champions” – listed companies that can decarbonise the planet.
In 2019 Herculano launched iClima Earth with other alumni from The Wharton School – Shaila Khan Leekha, COO and Steve Berry, Executive Chairman. iClima is based in London but the three founders cover the globe. The CEO is Brazilian and Portuguese; Leekha was born in Karachi and grew up between Pakistan and the US; while Berry is British but has a thick American accent and spent his childhood in Japan.

Herculano said: “The iClima founders felt that the most relevant and biggest problem was decarbonisation. Mitigating climate change is our utmost goal”

iClima’s thesis is that companies do not make enough impact by simply lowering carbon emissions, which Herculano described as “low hanging fruit.” Just lowering emissions will not be enough for the world to meet the Paris agreement target of limiting a global temperature rise to between 1.5 to 2 degrees Celsius by 2050. As a result, iClima focuses on companies that provide solutions to climate change by enabling the avoidance of emissions.

“About two and a half years ago we had a significant “aha” moment when we realised that to calculate the path to 2050 we needed an annual calculation,” explained Herculano.
Environmental, social and governance investing has met with accusations of ‘greenwashing’ but iClima selects investable companies based on the key figure of the potential greenhouse emissions avoided each year. For example, by companies such as Beyond Meat which provides plant-based burgers or Hellofresh, which provides meal kits and reduces food waste. Herculano said: “We don’t rely on black box scorecards or ratings but on tangible metrics.”

iClima spent 18 months on an analysis by researchers from Imperial College London and found that an annual rate of 7.6% reduction in global emissions is required to meet the Paris target, which equates to a required reduction over the next 10 years of at least 30.6 gigatonnes of equivalent carbon dioxide (GtCO2e).
An analogy that iClima uses is between dieting and between CO2 avoidance. In both cases, if it gets measured, it gets managed.

“Like in any diet, we lose the most weight in year one, and less each following year, to get to our desired loss of 30.6 GtCO2e,” iClima explained. “It may seem like a very tall order, but recent developments and innovation in technology (such as Vehicle-to-Grid), and changes in our transportation habits and behaviours can have a tremendous impact towards that goal.”

Their research started by looking at the 100 most substantive, technologically viable, existing solutions presented by Project Drawdown, that can bring the world to net zero by 2050 by avoiding emissions or sequestering carbon dioxide already in the atmosphere. The non-profit organization seeks to help the world reach “drawdown” – the future point in time when levels of greenhouse gases in the atmosphere stop climbing and start to steadily decline.

The technology and the greenhouse gas emissions avoidance estimated by Project Drawdown until 2050 were triangulated with a list of products and services classified as “green revenue” using the EU Taxonomy. The Green Revenue Assessment quantifies the percentage of each company’s revenues that came from climate change solutions in the previous year. In addition, companies are also subject to a negative screening test where rules define activities that “climate champions” cannot be exposed to.
“We open source our ranges of CO2e avoidance for each company per year and use a visualise-to-analyse approach,” said Herculano.

Indexes
In addition to identifying an investable universe for decarbonisation, iClima has developed indices which are calculated by Solactive (a Germany-based index provider).
The benchmark iClima Global Decarbonisation Enablers Index is designed to measure the performance of a global universe of publicly listed companies that can enable CO2e avoidance. The index was first published in September 2020 and currently has 157 constituents.

The fund provides exposure to 50 companies in seven segments promoting the decentralisation of energy generation. Distributed renewable generation is the ecosystem that allows green energy to be created and managed close to the point of use, for example at home. iClima believes grids will be dramatically different in the next 10 to 20 years.
“We will phase out the centralised fossil fuel-based structure and replace that with a modern, decentralised smart grid with material distributed generation based on renewable energy,” added iClima. “To date, our equity benchmark is the only one that represents this megatrend offering investors exposure to the future of how global energy is generated, distributed and consumed.”

Goals
Herculano says iClima’s main goal for the next 12 months is to make it easier for investors to find companies who are innovating for climate change and for them to feel strongly that iClima is taking a thoughtful and relevant approach.

Her advice to becoming a successful entrepreneur is that you have to wake up every day and think you’d rather not be doing anything else.
“You have to go with your passion because it is obvious if it is not there, and it’s not easy to work 24/7,” she said. “My co-founder and I have three kids and once we put them to bed, we zoom until midnight.”