Claire Calmejane: Not lost in translation 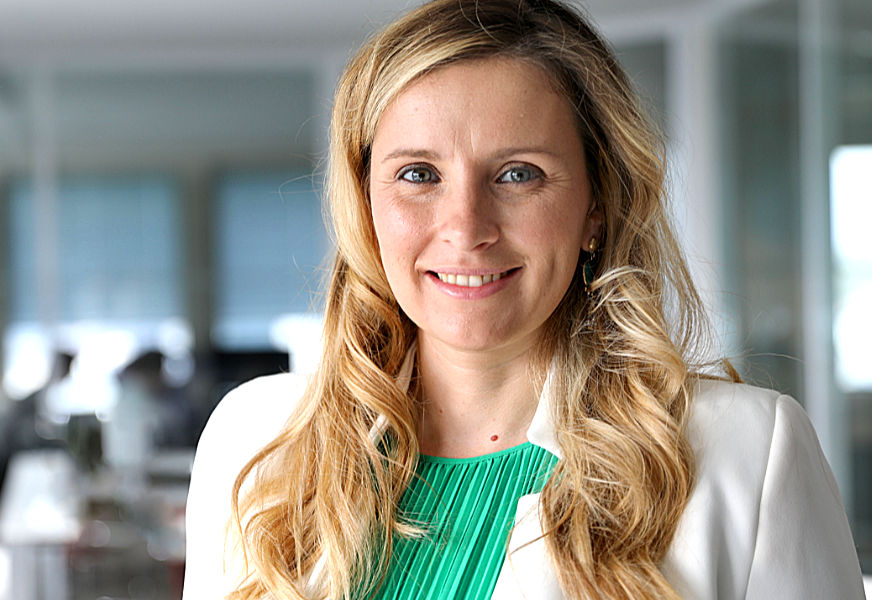 Since 2018 Claire Calmejane, Group Chief Innovation Officer at Societe Generale, has had the immense task of facilitating innovation within the French bank of more than 133,000 employees across 61 countries and 15 business lines. She describes herself as a translator in the organisation which is more than 150 years old.

“Digital is a new thing and I act as a translator to connect teams who know very well what they want to do it and how to do it, but are not sufficiently close to the heart of the strategy,” she said.

Innovation is at the heart of Societe Generale’s strategic plan which has three pillars – client centricity, efficiency and responsibility – each of which has an appropriate digital and innovation strategy.

Calmejane said innovation has two main missions. The first is to accelerate the transformation for each existing business line and the second is to create new businesses, which led to the launch of SG Ventures.

So far SG Ventures has invested €200m in start-ups through five acquisitions and minority ticket investments, sometimes with the Global Markets incubator. Calmejane oversees and works with digital officers across Societe Generale’s locations and business lines to make sure the strategy remains consistent with regard to the three pillars and objectives while following clients very strongly. For example, during Covid-19 the bank saw the next evolution of e-commerce and provided several services to small and medium-sized enterprises.

“Societe Generale already had a suite of e-commerce services but we accelerated digitalization for our customers,” says Calmejane.

At the beginning of this year approximately 60% of the bank’s 30 million retail clients were digital across the group’s seven retail banks and in this group, 98% of their transactions were online. In France, clients connect 34 times online or on mobile each month. Societe Generale also has Boursorama, a full online bank with three million clients, more than 50,000 of whom were acquired in 2020.

Calmejane said: “There is always more to do but we consider we have strong penetration when we benchmark ourselves and we have won prizes for our digital capabilities around the world.”

She continued that Societe Generale had been investing in transformation and innovation for 10 years, and has a strong track record of IT transformation and removing legacy systems, which is a competitive differentiator. For example, about 80% of infrastructure has moved into the cloud

“Covid generated a little bit of a push but didn’t change our strategy,” added Calmejane. “The underlying trend that Covid amplified was putting innovation at the service of responsibility.”

For example, in 2018 Societe Generale Ventures acquired lumo, a crowdfunding platform for financing renewable energy projects. One of the most important transformations for financial services will be to support ecological and climate transition and SG is one of the leaders according to Calmejane.

She said: “Digital inclusion is super-important and also making finance more responsible to contribute to solve the climate challenges and meet the UN goals.”

SG FORGE
SG Ventures identified 14 themes at group level in 2018 and created 60 start-ups that were incubated. Several died but seven were capitalised including FORGE, which provides services to issue and manage digital-native financial products registered on the blockchain.

“We have deliverables and targets but we have managed to create a network of 60 digital leaders,” added Calmejane. “We have also managed to position innovation and ourselves as a pioneer in some segments, such as digital assets and FORGE.”

FORGE is one of Calmejane’s favourite projects as simplification is one of the reasons she wanted to innovate in financial services.

“Sometimes financial services are too complex and digital presents a real opportunity to make things more easy, more transparent, save time and provide a better customer experience,” she added. “FORGE represents all of those values.”

The bank aims to be one of the leaders in security tokens and to execute all types of deals on new technology platforms. “We have a true conviction that this segment will keep growing,” said Calmejane.

However Societe Generale has no appetite for cryptocurrencies which are unregulated, highly volatile and a high-risk investment. In contrast, the bank does have a strategy for central bank digital currencies and smart programmable money. For example, Societe Generale provided French retailer Casino with a bank account for their stablecoin, Lugh.

The bank executed the first financial transaction settled with a central bank digital currency (CBDC) in May last year. Societe Generale’s covered bond vehicle issued instruments as security tokens directly registered on a public blockchain. The tokens were fully subscribed by Societe Generale which simultaneously paid the issuer in digital euros issued by Banque de France through the blockchain.

In April this year the bank issued the first structured product as a security token directly registered on the Tezos public blockchain. The securities were fully subscribed by Societe Generale Assurances. The bank said this demonstrated the legal, regulatory and operational feasibility of issuing more complex financial instruments on a public blockchain.

Calmejane said: “We have announced we will distribute enterprise products for tokens from January 2022 provided the Banque du France finalises its requirements, which is critical.”

Another trend that Calmejane identified is the bank-as-a-service, or as-a-platform. In 2018 Societe Generale acquired Treezor, a French banking-as-a-service platform which provides services across the entire payment chain using APIs.

“We are only at the beginning of this market but there is a billion dollar market revenue potential for the leaders in this field,” added Calmejane. “I have been doing this job for a long time and am very strict around revenue generation through digital and through innovation.”

She continued that in the bank’s new business model, the combination of revenue generation and market capitalisation of the ventures will be important, and some businesses may take 5-10 years to come to fruition. “Take FORGE as an example; we started that in 2018 but we think it’s a differentiator for the bank,” Calmejane said.

Career
Calmejane began her career in 2006 in the Technology Transformation department of Capgemini Consulting, where she supported companies and financial institutions in their technological and digital transformation. In 2012 she joined Lloyds Banking Group as Head of Digital Delivery in the Online Services Department. She was appointed Innovation Director and set up the Innovation Labs and the Digital Academy before being appointed Risk Transformation Director. In 2018 she left Lloyds to join the French bank.

She loved working at Lloyds and really enjoyed being in the UK but joining Societe Generale was an opportunity to innovate in a firm which is multi-country, multi-sector and multi-business.

“I have the support of our Chief Executive Officer, Frédéric Oudéa, in everything and that is because transformation is hard – it is not technological, but cultural,” she added.

When interviewing for the job at Societe Generale, Calmejane described finding an organisation that had already invested heavily in technology, so there was an opportunity to take the business to another level.

“The thing I saw at Societe Generale was a pioneering spirit,” she said. “In the executive committee we now talk about digital sales and marketing, data, how do we innovate in the business model, everyone knows about FORGE and how digital assets work.

She credits her success to her teams, family and sponsors. “An outstanding bunch supporting me and enabling me to be a successful leader and a mum,” Calmejane added.

From a young age Calmejane had computers at home and she recognised the huge potential in technology when she graduated from high school in 2000 during the internet boom. As a result she studied IT Engineering at the École pour l’informatique et les techniques avancées (EPITA) and also has a Master’s degree from the HEC French school of management.

Calmejane puts finance at the heart of the economy and digital as an opportunity to make it more accessible and simpler.

“It’s vital for the new generation to reinvent banking with a diverse pool of talent; if you want to build the future, come into finance and technology,” she added.

Diversity
In order to improve diversity in finance and technology Calmejane stressed that pipeline initiatives and showcasing role models is critical.

“For women to count, we need to count on them,” she said. “We’ve seen in France and in the UK that when we make space for women, they take it and perform.”

There also needs to be an economic imperative for women to return to work from childcare and to reduce inequalities in the workforce. McKinsey research has shown that diverse organisations outperform by up to 48% according to Calmejane.

“We’re not asking much, just 50% representation,” she said. “That’s why I sponsored our initiative with the start-up 50inTech to bring the number of women in c-level positions up to 50% by 2050.”

However, she is concerned that the impact of Covid-19 pandemic means that gender equality will not be achieved in her lifetime.

Calmejane concluded: “Societe Generale has committed to having 30% women in senior positions by 2023. I’m very proud of this.”

Cathy Gibson, global head of trading at Ninety One explains the changing dynamics of...
Read more
BestEx TopicsProfileTechnologyWomen in FinanceEWiF
Previous articleWFE and UN SSE publish paper on how derivatives exchanges can promote sustainable development
Next articleViewpoint: The impact of regulation: Tim Keady