THE SUM OF THE PARTS.

Dan Nicholls, head of trading, Hermes Investment Management describes how the trading desk both meets the challenges as well as leverages the opportunities of today’s markets.

Dan Nicholls joined Hermes in July 2015 and is head of trading. After graduation, he joined Gerrard and National as a trader before moving, in the same role, to Odey Asset Management in 2001. Dan was head of trading at Buttonwood Capital for six years and then worked in a similar position for a sovereign wealth fund for four years. He studied Zoology at the University of Newcastle and Algorithmic Trading at Oxford University’s Saïd Business School.

How have changing geopolitical forces impacted the trading landscape?

Last year may have been the most volatile since 2015, when measuring intraday changes of 1% or more on the S&P 500. However, it is important to recognise the average level of the VIX was 18, below the historical average. Live monitoring of our trades allows for effective management of increased volatility, with limits often in place. We are long term fundamental investors and although volatility is viewed as a risk, it also presents opportunities to ‘lock in profit’ or reduce risk.

In the UK, the uncertainty around Brexit has forced firms to prepare for multiple outcomes. Market participants in both the UK and the EU are in varying stages of developing their no-deal Brexit contingency plans – but at present no one knows how it will play out. The application of the EU share trading obligation (STO) and any future UK STO remains one major concern. Some European managers are considering delegating portfolio management to their UK entities in order to retain access to UK venues. The granting of equivalence is a non-issue as share ownership and trading in European names is essentially 80% dominated by UK & US trading. Considering this, I think it is likely that we will be given equivalence. As such, ESMA have recently revised their previous guidance concerning constraints of the extraordinary circumstances of a no-deal Brexit. The EU27 trading obligation for shares (STO) would not be applied to the 14 GB ISINs included in its previous guidance

Is there one asset class that has been particularly challenging to trade?

The job of the trading desk is to look at the incremental gains we can add to the investor. However, given low interest rates, Hermes fixed income has diversified its asset class base further and launched the Hermes Unconstrained Credit Fund, which has led to credit options & ABS (asset backed securities) trading to help generate additional alpha. Although new, it has not been a difficulty given the levels of expertise and experience on the desk.

What has been the impact of MiFID II and were there any surprises?

MiFID II rules, such as unbundling, have been hugely beneficial for trading desks. Execution decisions are being made solely on performance and the brokerage community has been forced to improve their level of service. The selection of execution counterparties has also been impacted because traders are able to systematically route orders solely on trading performance, without considering research provision or relationships. Overall the buyside believes this has had a positive impact on alpha generation

In general, two of the main goals of MiFID II are at odds with one another: increasing lit trading versus providing best execution. If market structure changes do not lead to improved execution, new venues, strategies and even new asset classes will emerge. In that case the market could effectively side-line MiFID and current regulation will be ineffective.

How has liquidity changed under the rules?

Despite MiFID II’s stated objectives, there has been little additional flow to lit venues. The percentage of volume traded on primary exchanges dropped from 40% pre-MiFID to the current 31%. What we have seen is three notable changes since MiFID was launched – an increased use of periodic auctions – which remain attractive despite the lifting of caps; the development of ELP SIs, (electronic liquidity provider systematic internalisers) particularly for below LIS (large in scale) addressable flow and a shift of volume to closing auctions. The result is that the traders have to be equipped to source new opportunities for unique liquidity.

We have met with all the ELPs to better understand their liquidity and are also having on-going discussions with the exchanges to keep up to date with their innovations. It is key to know how you are interacting with liquidity sources in relatively large orders as we are seeking to limit signalling and market impact.

How has Hermes and the trading desk responded?

As there is a limit to the cost of keeping brokers on a list, there has been a reduction, albeit not massive, in the number of brokers being used. What has been more marked is a consolidation of flow which was reflected in the recent 2018 RTS 28 Reports (Top 5 Venues). We have shifted the focus of the desk towards areas which can add alpha and as a result we have increased the amount of low touch business that we execute. This allows the trader to concentrate on the high touch, hands-on execution and it also benefits the underlying Hermes clients given the lowered commission charges.

How does the explosion of data influence trading decisions?

MiFID II has created an explosion of data for analysis. Hermes has employed an internal, independent TCA Manager, who sits outside of the trading desk as part of the investment office. The data collection and processing has taken a long time but has led to an improvement in the quality of execution. For example, certain venues have been switched off.

We are able to identify our best as well as worst trades and then learn from our analysis. Data regarding trader behaviour, algorithms as well as brokers used, exchanges and venues accessed enables us to have conversations with the sellside about smart-order-routing logic. In some cases, issues we have identified, have led to the SOR altering its logic.

Is the trading desk multi asset and if so, what does that mean?

We have made a big push to create a multi asset trading desk. We have heads of fixed income, equities, FX and money markets. However, we now have a desk where every trader can trade at least two of the three areas. This has helped provide greater flexibility and reliability as well as cross asset knowledge sharing. For instance, correlation between stock movements and where the CDS (credit default swap) is trading can help improve execution. 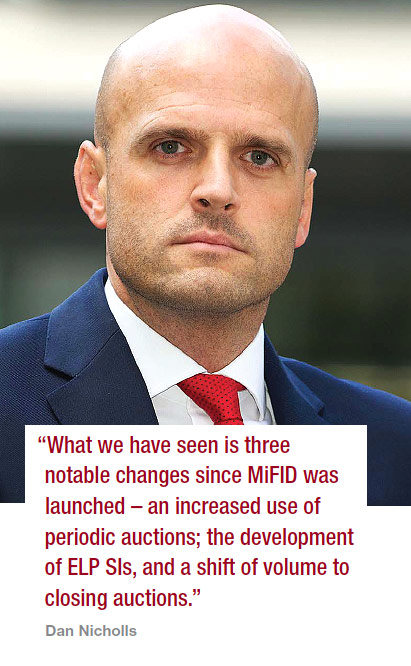 You won best trading desk of the year – what is the secret of your success?

You are only as strong as your weakest link, which is why we have a strong emphasis on teamwork. People have to trust each other and the thought process behind trading decisions. We have a tight group of diverse individuals who altogether have over 100 years of combined experience. We also value the importance of relationships with the Street because we have to trust the people who we trade with, in order for both parties to be incentivised to look after one another. Internally our clients are our fund managers. We have to understand the way they are looking at securities and manage their expectations. There is constant dialogue with the fund managers to ensure we are all on the same page.

However, Hermes actively encourages career development and makes sure individuals have both practical experience in terms of shadowing respective asset class specialists, but also enhancing theoretical knowledge via professional exams. Each trader is required to take a relevant course or exam every year, ranging from the Fixed Income & Derivatives qualification, algorithmic equity courses to industry conferences.

What is your key driver and how is it measured?

Commitment to best execution. We describe our policy as a series of principles rather than a decision tree which would limit a trader who is trying to achieve best execution. We benchmark all of our trading activity with a pre-trade expectation in order for us to successfully compare this against the most relevant post trade benchmark for analysis. There is also a constant dialogue between the fund manager and the trading desk and the traders can add colour and help generate alpha.