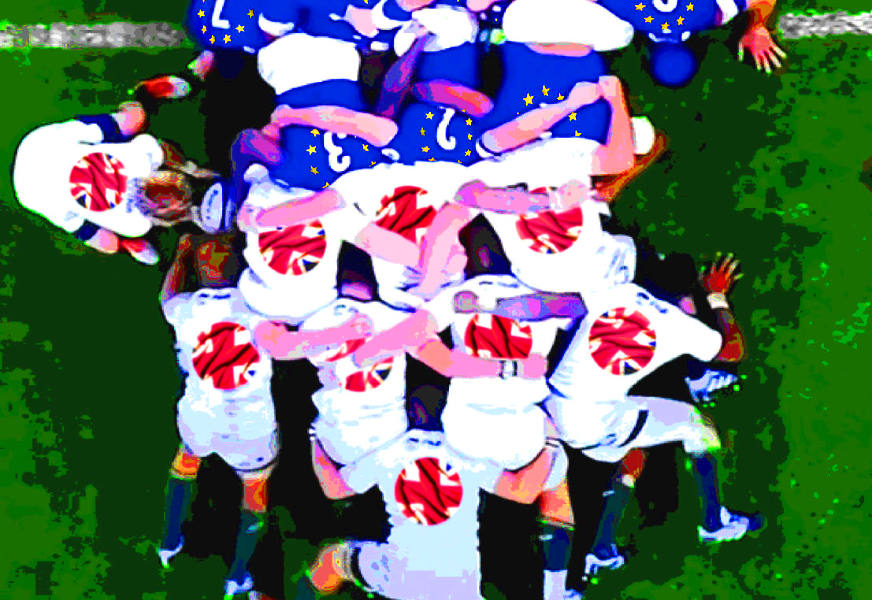 Last year as the UK counted down to the end of the Brexit transition period, all the talk in UK financial circles was on equivalence with the European Union. Fast forward to today and the word is barely a whisper. The two sides have instead signed a memorandum of understanding (MoU) although it is unclear how this will shape the relationship going forward.

Financial services were famously left out of the trade talks last year, but the UK government had vowed to lower the Brexit driven barriers to trading, investment banking and asset management. The four-page MoU though is a far cry from that pledge. It is not a legally binding agreement but a forum to hold “exchanges of views on the respective policies, rules and processes concerning deference regimes, such as equivalence” – the EU regulatory process for granting market access to firms if the bloc deem they are similar to its own.

The MoU is more akin to what the 27-member bloc already has with the US for arranging regular, informal and non-binding meetings of financial regulators to discuss new rules and air any disagreements. It does not grant the same level of access the UK had before it left the fold at the end of last year.

To date, Brussels has only granted equivalence for two activities in the UK: derivatives clearing houses for 18 months starting from 1 January 2021 and settling Irish securities transactions until June 2020. It has declined to grant any long-term direct access for financial firms, and it does not appear to be in any rush to do so.

In fact, some market participants in London believe the EU will never grant full equivalence, while Bank of England Governor Andrew Bailey has stated that Britain’s financial services industry, which accounts for 7% of the country’s GDP, should not be forced to accept EU rules.

Sarah Hall, professor of Economic Geography, University of Nottingham attributes the hard line taken to EU fears that the UK will end up diverging from European rules. “It seems clear that both the UK and the EU are currently working to support their own financial services sectors,” she says, adding that politics appears to be overriding many decisions.

The result, she notes, is that uncertainty will continue to hang over the future of Brexit while the value of equivalence is dwindling and will become even less relevant over time.

Samir Pandiri, President of Broadridge adds, “An equivalence deal of some type would certainly provide an immediate solution for financial services firms in relation to some of the regulatory fragmentation. However, we don’t see firms planning on equivalence, and it’s not seen as entirely essential.”

The City slips down the ranks
In the meantime, London has lost its dominant position as Europe’s largest share trading hub to Amsterdam. The EU’s share-trading obligations requires stocks to be traded from EU-based venues, which is why in January an average €9.2bn shares a day migrated to Euronext Amsterdam and the Dutch arms of Cboe Europe and Turquoise. This was not only a more than fourfold increase from December 2020 levels but also higher than the €8.6 billion daily shares traded in London. The Dutch financial capital also grabbed over 20% of the euro swaps market and more than $160bn on the sovereign debt trading markets. The transfer will be further supplemented in June, when trading of Europe’s €1bn-a-day flagship carbon emissions market also relocates to Amsterdam.

“This was not a surprise, and the situation seems unlikely to reverse given that investment trading venues have made significant investments in setting up platforms in the EU,” says Rebecca Healey, managing partner of Redlap Consulting. “One of the unknown grey areas though is where the OTC and systematic internaliser activity is taking place. Opacity in the system remains, with questions over what is addressable and what is non-addressable. Until there is greater standardisation in terms of data transparency, that opacity will remain.” 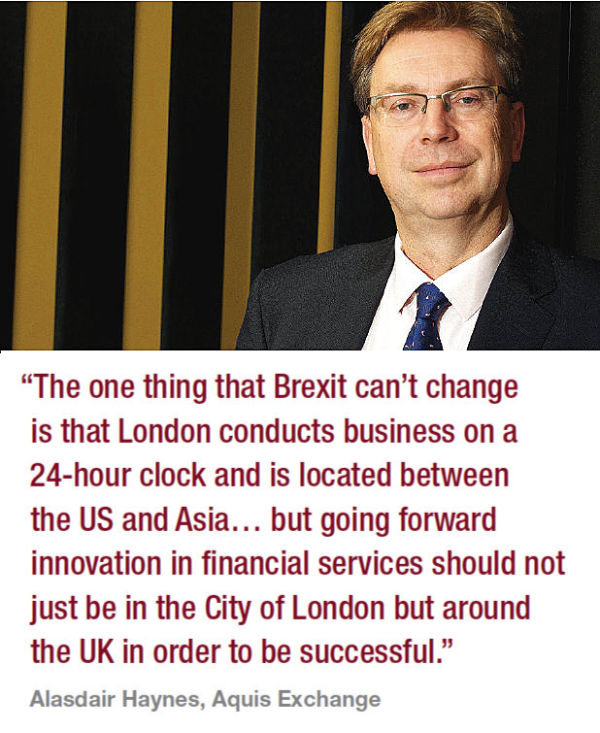 Alasdair Haynes, CEO of Aquis Exchange also believes that “the idea of equities trading coming back is a non-starter. I also think that the battle for clearing of swaps could be more of a potential systematic problem. The winner though may not be Europe but the US.”

In fact, research by the financial data provider IHS Markit found that US swap execution facilities now account for more trading in euro interest rate swaps than British platforms. The proportion traded on SEFs climbed to about 20% in January from less than 10% in July last year.

Not all doom and gloom
However, it would be too easy to write off the City of London and the UK’s wider financial services community. So far, just over 7,500 jobs in the sector have moved to the European Union, according to the consultancy EY, compared to 2016 estimates of around 80,000 potential job losses. In addition, UK regulators are already flexing their muscles and not re-writing but amending the rule book to make the City look more appealing.

For example, the Financial Conduct Authority (FCA) eased its approach to dark trading and the double volume caps (DVC) that were introduced under MiFID II three years ago. The regulator hopes that lifting curbs on dark trading will sway large investment banks to return to London because they like the anonymity of dark pools for buying and selling big blocks of shares.

Moreover, Lord Jonathan Hill, former EU financial services commissioner, published a government backed review of London’s listings regime and recommended a wide range of reforms to loosen rules in order to sharpen the UK’s edge over rivals in the US and Europe. 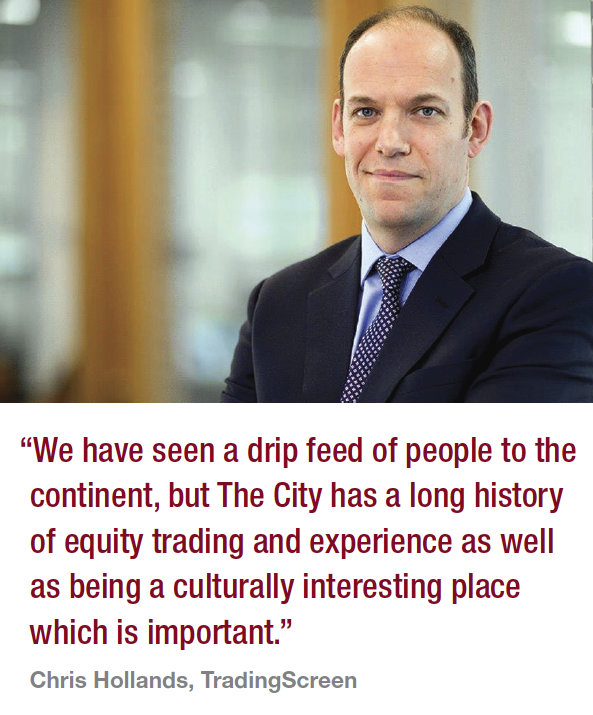 This included reducing free float requirements from 25% to 15%, which has proven to be a deterrent to some companies to list. Lord Hill also called for “liberalising” UK special purchase acquisition vehicles (Spac) rules in order to capture this burgeoning sector. Data from Refinitiv showed that in the first two months alone, Spacs accounted for more than 20% of overall global transaction activity. “I do not think it will be as catastrophic as people think,” says Chris Hollands, head of Europe and North America sales at TradingScreen, a technology provider to asset managers. “The FCA played a pivotal role in drawing up MiFID II and its recent actions are aimed to make it more attractive to keep liquidity in London. We have seen a drip feed of people to the continent, but The City has a long history of equity trading and experience as well as being a culturally interesting place which is important.”

Haynes agrees that London has the resources and talent as well as time zone. “The one thing that Brexit can’t change is that London conducts business on a 24-hour clock and is located between the US and Asia,” he says. “It is still the largest capital city with a built-in infrastructure, a strong educational system and international community but going forward innovation in financial services should not just be in the City of London but around the UK in order to be successful.”

“Reflecting the political levelling up agenda, the review clearly supports fintech growth outside the Square Mile,” she says. “The UK fintech sector is worth around £11bn, an impressive 10% of global market share, with some expectations to more than triple by the end of the decade. London clearly commands the centre, but the review confirms that there is massive potential across the UK.”