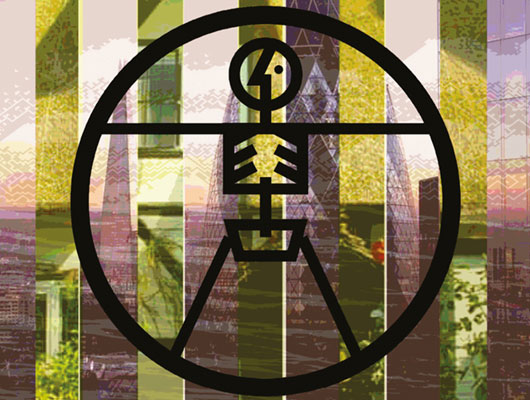 Looking ahead to a post-pandemic world, there is a lot of talk about the hybrid working model but opinions are divided. Lynn Strongin Dodds reports.

Last year when the pandemic was raging, the hybrid working model was seen to be the way forward. However, as countries slowly unlock, differences are emerging not only across regions but also within sectors in the financial services ecosystem. The question is whether the fear of missing out or FOMO on promotions, projects, gossip and the like will pull people back to the traditional office routine. 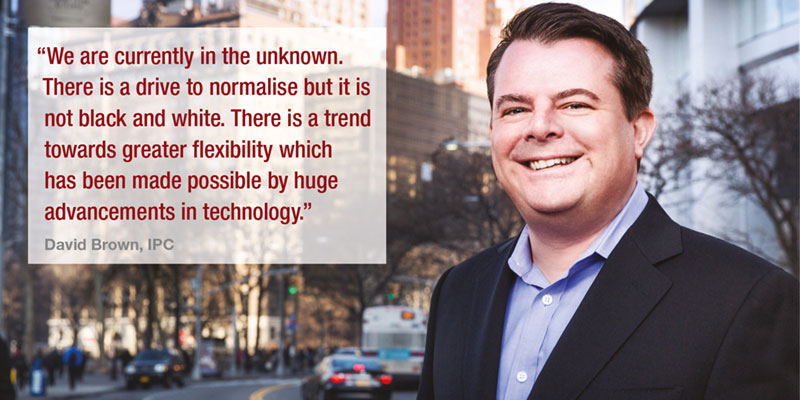 At the moment, it is hard to predict the future of the working landscape. “We are currently in the unknown,” says David Brown, chief operating officer of IPC. “There is a drive to normalise, but it is not black and white. There is definitely a trend towards greater flexibility which has been made possible by huge advancements in technology. I think we will have a better idea in the fourth quarter given the new variants and different rates of vaccination programmes.” 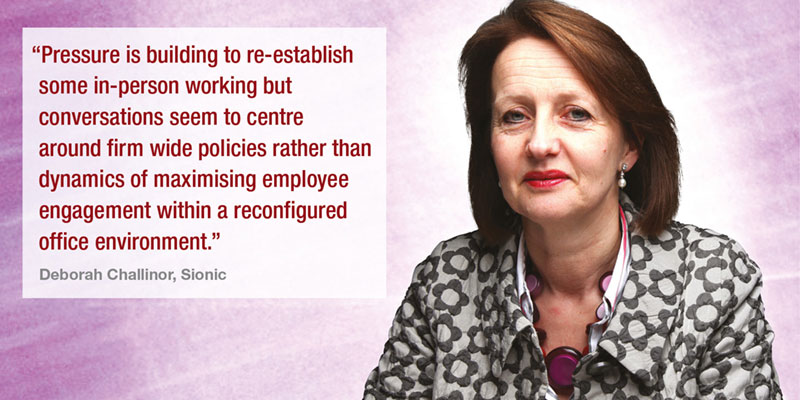 There is no shortage though of research pointing to different configurations. As Deborah Challinor, partner at consultancy Sionic puts it, “One of the things that strikes me is that there is no one answer to the ‘big office return’. Yes, pressure is building to re-establish some in-person working but conversations seem to centre around firm-wide policies rather than dynamics of maximising employee engagement within a reconfigured office environment.”

A recent report from workplace software company Okat, for example, underscores this. Not limited to financial services, it canvassed over 10,000 workers across eight European countries including the UK, and 12 industry sectors. It found that 42% would prefer a mix of home- and office-based working, while 17% want to work from home permanently. However, the consensus was that employers will be reluctant to offer greater flexibility.

The report also said that despite the media, the death knell of the office is greatly exaggerated. In fact, it noted that physical office spaces are a staple of the work experience. They not only act as both a professional and cultural hub, but also provide an important support system for those who find remote working challenging, such as employees who live in small flats.

Other studies such as the one from UK-based Centre for Cities predicts that the five-day office week will eventually make a comeback within two years. It believed that while a blend of home and office work has become the standard over the last few months as the UK recovers from the Covid-19 pandemic, there will be a shift back to pre-Covid working patterns for many as restrictions are lifted. 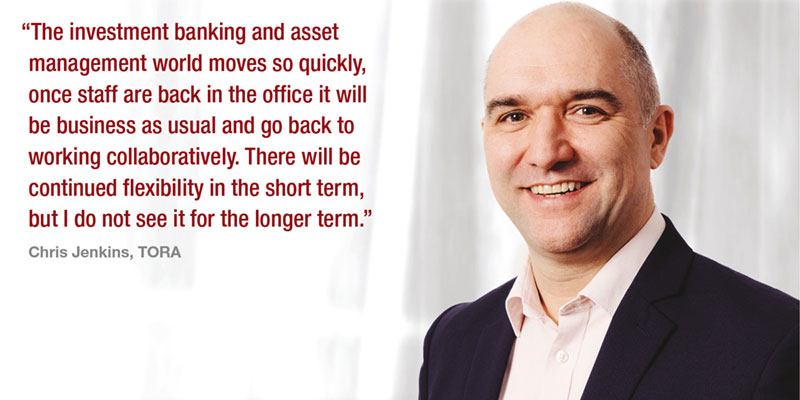 The investment banking and asset management world moves so quickly, once staff are back in the office it will be business as usual and go back to working collaboratively,” says Chris Jenkins, managing director of TORA. “There will be continued flexibility in the short term, but I do not see it for the longer term as we live in an instant results world. However, it will depend on the role that people have.” 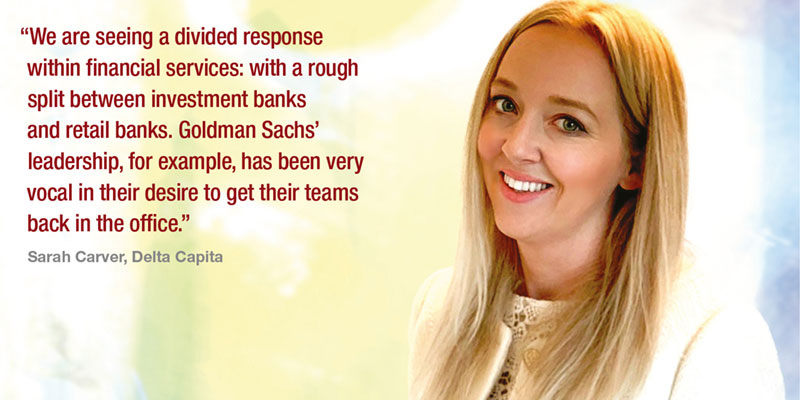 For now, investment banks, particularly in the US, are expecting their staff to return to their physical locations. “We are seeing a divided response within financial services: with a rough split between investment banks and retail banks,” says Sarah Carver, head of digital services at Delta Capita. “Goldman Sachs’ leadership, for example, has been very vocal in their desire to get their teams back in the office. Meanwhile, many of the retail banks are seizing the opportunity to significantly reduce their cost base and cater to the employee sentiment. In the UK HSBC, Lloyds, Metro, Nationwide, and Standard Chartered have cut as much as 40% of their office space”.

Goldman Sachs said it was expecting all US employees back at their desk by June, and if it is the UK, in mid-July, if restrictions are lifted. CEO David Solomon recently told a conference that “For a business like ours, which is an innovative, collaborative apprenticeship culture, this is not ideal. And remote working is not a new normal. It’s an aberration that we’re going to correct as soon as possible.”

His rival Jamie Dimon, CEO of JP Morgan Chase, seems to be on the same page and said he wants to see a “consistent rotational schedule” by early July. He has pushed the pause button on Zoom calls and although Dimon notes he was fine with the greater flexibility and part-time working, it is no substitute for being at the office.

By contrast, Citigroup is taking a different route and retaining the home and office model longer term, which seems to be more in tune with its European counterparts. Aside from the HSBC and Standard Chartered planned pruning of space, Barclays CEO, Jes Staley has previously indicated he will avoid a strict mandate on time at the office, while Société Générale has told staff they can work remotely for up to three days a week. Deutsche Bank is also working towards a hybrid model, and is in consultation with employees to work out the finer details on what that might look like.

Meanwhile, French bank BNP Paribas, including its asset management arm, conducted a survey and the upshot is a voluntary return to the office through the Summer and a more formalised hybrid plan in the Autumn. In general, though asset managers seem to be more adaptable.

Last year Schroders announced it had embraced “permanent flexible working” for staff, while more recently Paris-based Amundi implemented its hybrid plan in June. It said the agile schedule will give employees the option of working from home up to two days per week., Vanguard is also going down the blended model for the majority of its staff although Federated Hermes will continue to assess its options.

The logistics
Creating a more agile workplace is one thing, but developing an operational structure is another. “It will likely mean different things for different organisations,” says Carver. “There isn’t one answer for all, as the specific culture, vision, strategy, footprint, and organisational design will influence the right hybrid model and also determine the success of it. The key point is that employees want options when it comes to flexible work so organisations cannot look at this as a one size fits all or ‘averaging’ approach.”

One of the challenges is that those working remotely should not be made to feel like second class citizens. They should have access to the same opportunities to climb the ladder and work on interesting projects. “There are several questions that firms should ask – do we have the tools, technology and resources to make this work?” says Miriam Stapor, people lead at consultancy Quorsus. “There needs to be greater engagement and companies should be transparent and clear as to what they are doing. No one should be at a disadvantage or be left out of conversations.” 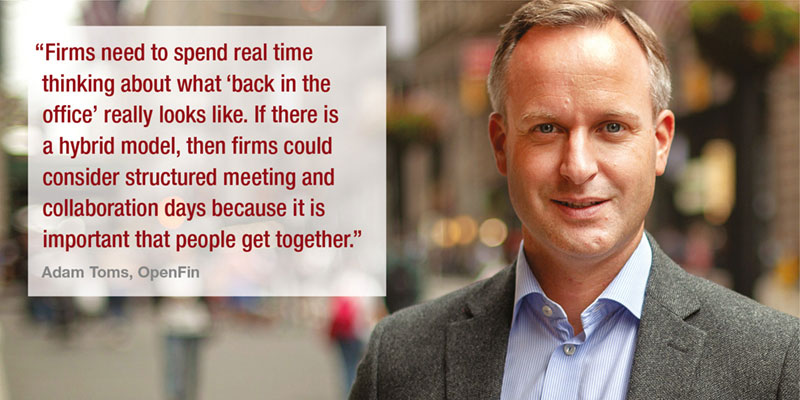 Adam Toms, CEO of OpenFin Europe also believes robust frameworks should be implemented. Firms need to spend real time thinking about what ‘back in the office’ really looks like,” he says. “If there is a hybrid model, then firms could consider structured meeting and collaboration days because it is important that people get together. The foundations of many relationships are based on trust, and we need to continue to build upon that to foster collaboration and innovation.”

Unsurprisingly, this will be a testing ground for managers and their willingness to experiment according to Challinor. She notes this means re-imagining how work could be. “To bring teams together for as little as 2-hours in innovation labs where divergent new thinking around the many challenges, such as the best mix of at-home versus in-person roles and tasks, can be incubated,” she adds. “The result is then new ways of working experiments which people can enjoy testing before being more widely rolled out.”

She believes that the most successful experiments will be based on holistic thinking and that work should be better allocated across hybrid teams to give people more chance to start finishing initiatives as opposed to constantly starting new things. “The risk of burnout being reduced should include changes in leadership messaging, new tools, a culture which rewards delivery, a better way of tracking output and training to help with spotting and supporting people at risk of burnout,” she adds.

Jannah Patchay examines the digital solutions that can be applied to the ESG data...
Read more
BestEx TopicsBuysideEditorialBack IssuesSummer 2021
Previous articleBest Execution European Women in Finance Awards
Next articleUN call for asset managers to play their part in climate transition