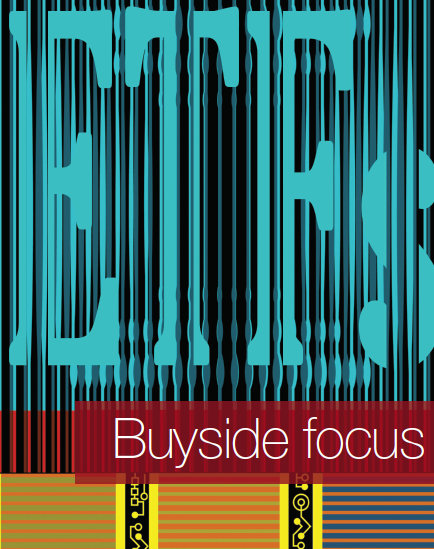 There has been a discernible shift to passive from active investing. Lynn Strongin Dodds looks at the trend and the response of asset managers.

It is not easy being an active fund manager these days. Passive strategies are capturing the hearts and minds of investors as the regulatory focus on fees and poor performance becomes sharper. The competition is only set to become tougher as fund managers on both sides continue to mine data and technology for shinier and newer product offerings.

On the surface the active segment looks healthy with figures from Willis Towers Watson’s Thinking Ahead Institute showing it accounts for around two thirds of the hefty $91.5tn assets under management of the world’s largest 500 asset managers. A closer look though reveals that their passive counterparts have enjoyed steady growth from 19.5% to 22.4% between 2012 and 2017. Although, this was not the case in 2018 reflecting an overall decline in AUM across the industry.

The pace quickened again in 2019 with a milestone reached in the US last August. Data from Morningstar revealed that for the first time, assets in US index-based equity mutual funds and exchange traded funds (ETFs) totalled $4.27tn, exceeding the assets of their active counterparts. Its research also showed that for the first half of 2019, roughly $30bn had been pulled during the first half from US and European active funds, the highest rate for three years.

There are several drivers behind the trend, according to Andrew Wilson, head of asset manager solutions EMEA at State Street Bank. “There is an immense amount of regulatory pressure around transparency including the areas of fees cost and charges,” he adds. “That is happening in parallel with rising costs of technology and competition.” Combined, it is “leading to a broader conversation about the performance of active managers and how they should respond.”

In some countries such as the UK, the Financial Conduct Authority has been shining an ever- brighter light, launching a review of the asset management industry three years ago while MiFID II introduced two years ago ushered in a new era of cost disclosures. More recently, policymakers in the UK, Europe as well as in the US have been naming, shaming and fining the so-called closet trackers who levy high charges for returns that can be cheaply and easily replicated. One of the most notable cases has been Janus Henderson which had to pay a £1.9m penalty to the UK watchdog.

Overall, active managers have been taken to task for missing the mark for almost a decade. S&P Dow Jones Indices annual report last year noted that for the ninth consecutive year, the majority (64.49%)) of large-cap funds lagged the S&P 500. Their cause was not helped by the suspension of Neil Woodford’s Equity Income fund and the problems at GAM which saw the liquidation of its absolute return bond fund range as well as departure of one of its star fund managers, Tim Haywood, after a high-profile dispute.

One of the main beneficiaries of this fallout has been ETFs and products which offer low cost, transparent and liquid assets. The latest report card from independent research and consultancy firm ETFGI show that total assets hit $6trn by the end of October, doubling in size in less than four years. Smart beta funds and products have played a pivotal role in their growing popularity, with separate ETFGI research showing that on the equity front alone, assets jumped by 26.1% from $618bn to $779bn in the first nine months of 2019. This translated into a five-year compounded annual growth rate of 19.9%.

These hybrid structures which sit between the two realms incorporate insights found within actively managed funds into a rules-based indexing methodology. They cover a spectrum of well-known factors such as value, momentum, low volatility and quality to diversify risk and potentially enhance returns. However, a new paper from research Affiliates called “Plausible Performance: Have Smart Beta Return Claims Jumped the Shark” warns that investors need to look beyond the hype. This is because performance back tests are often used as evidence to “prove” a smart beta strategy is “better” than its competitors.

The problem, according to the paper is that these results are easily data mined. Testing 28 funds on the Research Affiliates Smart Beta Interactive (SBI) tool on the firm’s website, it found most long-term winners lagged behind their benchmark for five to six years, meaning they couldn’t deliver excess return consistently. This does not make them less worthwhile but there needs to be a recognition that “any strategy whose performance deviates (even successfully) from the market’s performance, is virtually guaranteed to have multiple years of underperformance over a 10-year holding period,” according to the study. 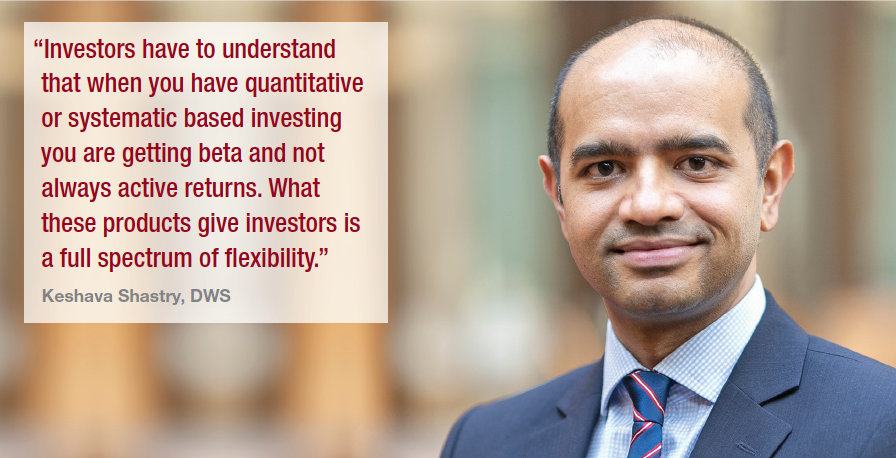 “Investors have to understand that when you have quantitative or systematic based investing you are getting beta and not always active returns” says Keshava Shastry, head of ETP Capital Markets at DWS. “What these products give investors is a full spectrum of flexibility. We see some asset managers use them as long-term strategic holdings in a developed market portfolio while others may use them to gain exposure to emerging markets. We are also seeing hedge funds use them for intra-day and technical trading.” 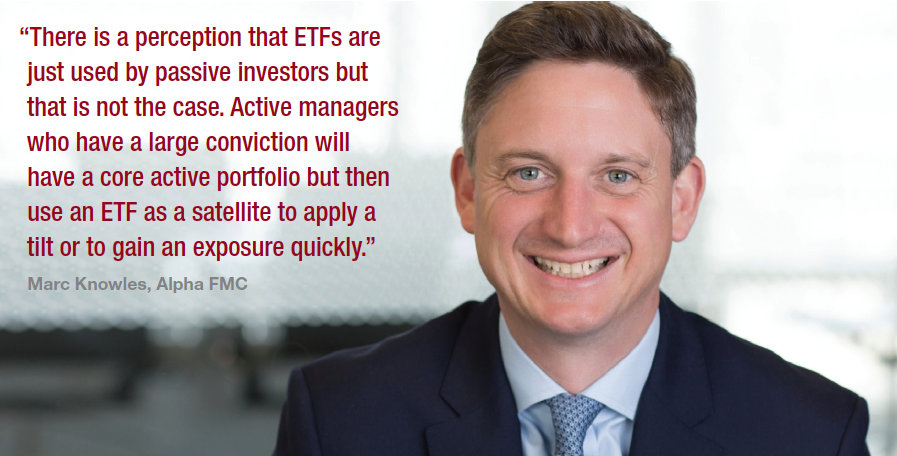 Other active managers are employing them as part of their portfolio construction or to help lower their overall fees. “There is a perception that ETFs are just used by passive investors, but that is not the case,” says Marc Knowles, head of ETF and index practice at consultancy Alpha FMC. “Active managers who have a large conviction will have a core active portfolio but then use an ETF as a satellite to apply a tilt or to gain an exposure quickly.”

Looking ahead, the lines may get blurrier especially with the introduction of the so-called actively managed non transparent ETF in the US. Although it may not easily roll off the tongue these newly minted products approved by the Securities and Exchange Commission are attracting both attention and controversy. The reason is that managers do not have to disclose all of the fund’s investments on a daily basis which has been the main selling point of the traditional ETF.

Last April, the SEC gave to green light to Precidian Funds to roll out its product called ActiveShares which has US fund providers including American Century, BlackRock, Capital Group, Columbia, Gabelli, JP Morgan and Nuveen signing on as licensees. This suggests there will be a plethora of ETFs based on the structure in the future. 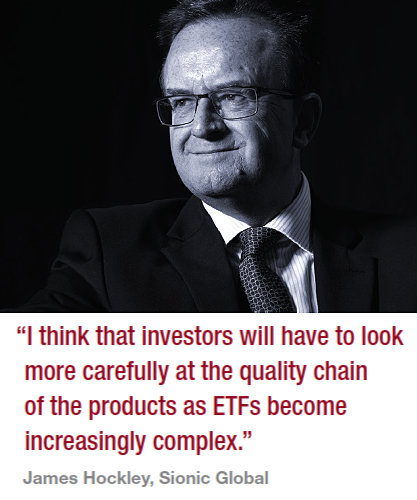 The main attraction is that “It allows managers to keep their secret sauce,” says James Hockley of consultancy Sionic Global. This will mean that managers can put more strategies into an ETF. However, what will not change is that the authorised participants will ultimately remain the main sources of liquidity. I do think that investors though will have to look more carefully at the quality chain of the products as ETFs become increasingly complex.”

The same is true for the active space. Not all managers fail to deliver. “Active managers drive the benchmark,” says Yves Choueifaty, president and chief investment officer of TOBAM, a quantitative asset manager focused on strategies to maximise diversification. “It is the benchmark that replicates active managers, not the other way around. When the benchmark does well, it is thanks to active managers, they compose it and decide the price of assets.” 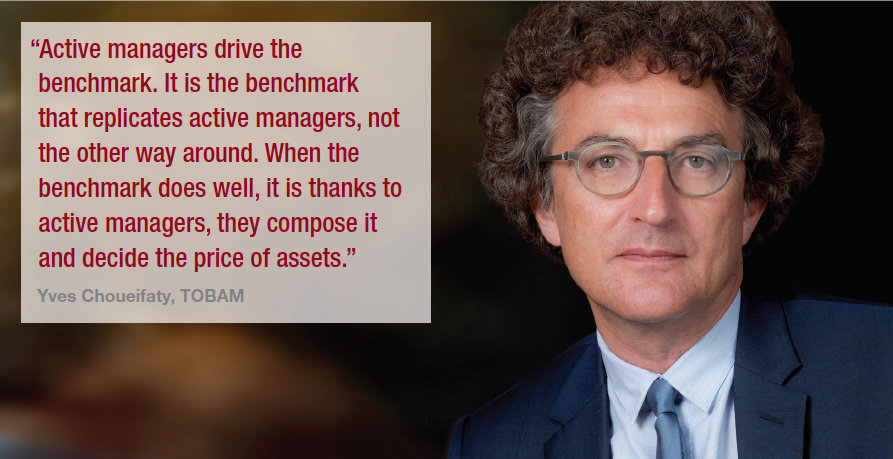 Although the rivalry between the two will continue, Dean Crouch, associate director at Kingwood, believes one optimal solution is to have a blend of active and passive strategies within a portfolio. He notes that passive investing is considered more suitable for investing into liquid larger cap stocks that are on one of the main indices. However, if an investor wants to generate additional alpha through exposure to an emerging market country or something more specialised, like a healthcare or technology theme, he would advocate a more active approach to utilise the experience and knowledge of the underlying fund manager.