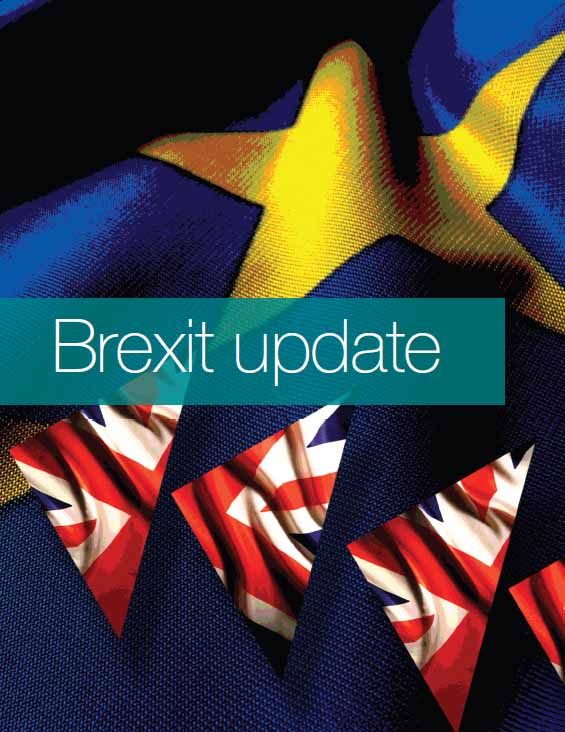 A LEAP INTO THE UNKNOWN.

So, does Brexit really mean Brexit? The deadline, set by Prime Minister Theresa May, for triggering Article 50 has arrived and the UK has pushed off on its two-year walk to the outer reaches of the European Union. Yet even having passed that point of no return, the reality is that very few – if anyone – has a genuine idea what Brexit means.

Hard Brexit – a world in which the UK is entirely severed from its largest trading partner – looks the likely route but protocol stipulates that May must not forge any new relationships before Article 50 is in motion. This creates something of a challenge for the UK in that it has to plan for an entirely new future while having no clue as to what that comprises.

This is problematic for all business sectors but for the nation’s financial institutions the uncertainty of Brexit is particularly severe. 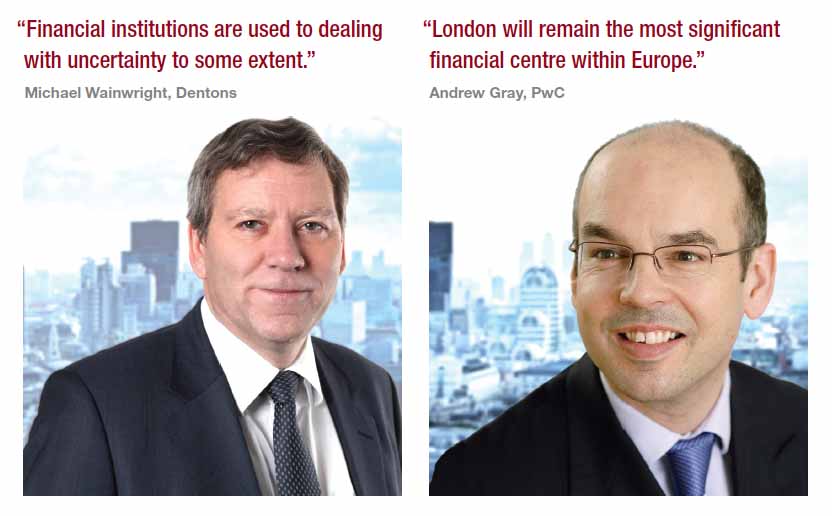 The financial services sector contributes 7% of Britain’s GDP and employs 1.1m according to an EU Brexit Committee report, London is currently ranked as the leading financial services centre in the world. The sector’s regulatory regime is intrinsically linked to its EU partners and in the last few decades financial institutions have committed millions of man hours and billions of pounds harmonising their operations with those on the continent.

Yet, in the space of two years they will be expected to adapt to a political and economic system of which there is no clear picture. Andy Nybo, analyst at capital markets research firm TABB, says: “Preparing for Brexit is like planning a building without knowing what it is supposed to look like.”

And that may be why getting the country’s financial institutions to talk about their plans for Brexit meets with a wall of silence.

Aside from HSBC, which has stated it could move thousands of employees abroad post-Brexit, few other players have been willing to make on the record comments about how they will manage operations once the UK goes solo.

All this uncertainty and threat of abandonment has not gone unnoticed by the government. A recent report from the EU Brexit Committee published by the House of Lords last December states: “It will be vital, in the interests of all parties, to provide certainty as early as possible in the process. Negotiations on financial services should commence as early as possible after notification under Article 50.” 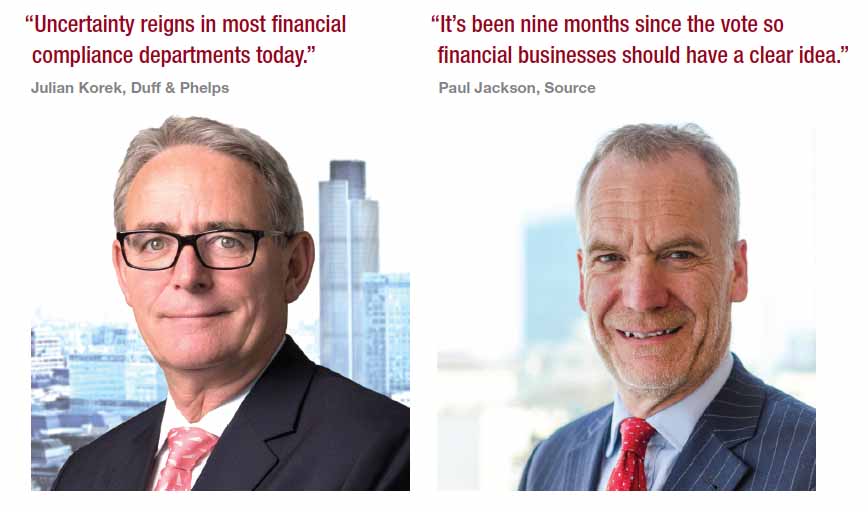 The EU Committee expresses concern that “in the absence of clarity over the future relationship [with the EU] firms may pre-empt uncertainty by relocating or restructuring, for instance by establishing subsidiaries or transferring staff, even though such changes may ultimately prove to be unnecessary. This would not be in the interests of the industry or the UK”.

However, that still fails to actually provide any clarity and financial services must, like the rest of us, wait and see what happens after March.

One advantage the financial sector has is its experience in dealing with uncertainty thanks to the chopping and changing to EU financial regulation – such as Solvency II – in recent history. In fact, there is some irony in that in adapting to be part of Europe, UK financial institutions will be better prepared to exit it.

Michael Wainwright, banking and finance partner at law firm Dentons, says: “Financial institutions are used to dealing with uncertainty to some extent. The amount of change in the regulatory system over the last 10 years, and in dealing with the financial crisis, has given them the ability to plan for a range of outcomes and manage difficult situations.”

There are those that think the time that has passed since last June’s referendum vote should have been long enough to start making plans for the plethora of Article 50 outcomes. As Paul Jackson, head of multi-asset research at ETF provider Source, says: “It’s been nine months since the vote so financial businesses should have a clear idea under different scenarios of what they need to do and have contingency plans in place.”

Jackson suggests that since there is unlikely to be any clarity on the UK’s future even after two years, some financial businesses may wish to ‘make concrete’ their early plans and wait for the fine detail to come through later.

This suggestion may seem logical if keeping the business in limbo is too painful to bear, but Nybo warns some of the UK’s financial juggernauts are not easily halted, never mind carrying out a U-turn if the government shifts its Brexit course. “A business needs to be nimble to be able to change a strategy when it doesn’t meet any unexpected changes to the mandates,” he says.

While financial institutions have become old hands at managing regulatory change, it does not mean it is any less of a burden. Post-Brexit businesses will have operations across a range of jurisdictions – domestic, European and global – that need to comply with a range of regulations.

Nybo says: “Institutions will need to take a hard look at the aftermath of Article 50 and plan out operational continuity under the different regulatory frameworks that will exist given that they have EU and non-EU operations.”

A February survey from consultant Duff & Phelps, which covered 200 financial institutions, found nearly two thirds (62%) agree Brexit will have an impact on their compliance arrangements. More than a third (35%) believe Brexit will have a short-term impact while more than a quarter (27%) expect the impact to be felt in over 18 months.

“Uncertainty reigns in most financial compliance departments today.” says Julian Korek, global head of compliance and regulatory consulting at Duff & Phelps. “Although the UK is expected to be in a good position in terms of third country equivalence, firms are looking for further stability from regulators.”

Uncertainty may be the Brexit watchword, but commentators show more confidence about the UK – notably London’s – ability to retain the world’s financial crown. According the EU Committee, New York is the only other real contender for global financial centre while ‘other European cities are far behind’.

The Committee argues that replicating London’s financial ecosystem elsewhere in Europe is ‘unrealistic’ and it hopes that the capital’s dominance in the sector will give the UK leverage in negotiations with the EU.

Andrew Gray, partner at consultant PwC, says the City of London will retain its financial dominance but it is likely some operations will start to shift across the Channel. “London will remain the most significant financial centre within Europe,” he adds “However we will start to see business activity migrating to other locations.”

For example, funds might opt for Dublin or Luxembourg where the legal structures and infrastructure are already in place. Securities and derivatives operations may transfer to Paris which boasts centres of excellence. This disparate kind of relocation of London’s activities across the rest of Europe suggests that while the City’s supremacy may be eroded no other European city will attract enough attention to steal its crown.

Nybo also questions whether Europe could attract the same concentration of financial skillsets, English language speakers and the overall financial infrastructure boasted by the UK. “You can say you are going to move business and operations but if you are a very large financial institution with thousands of employees who live in the UK, are you going uproot them and move them to Germany or France?” he adds. “London has a huge advantage of being home to a very well educated workforce with a deep and broad financial knowledge.”

As with any major change, there will be winners and losers. The fallout from Brexit will be felt long after Article 50 has been triggered and there will likely be both shock and anti-climax along the way. For now, the financial sector can only take each day as it comes.