Best performing companies are also the most diverse 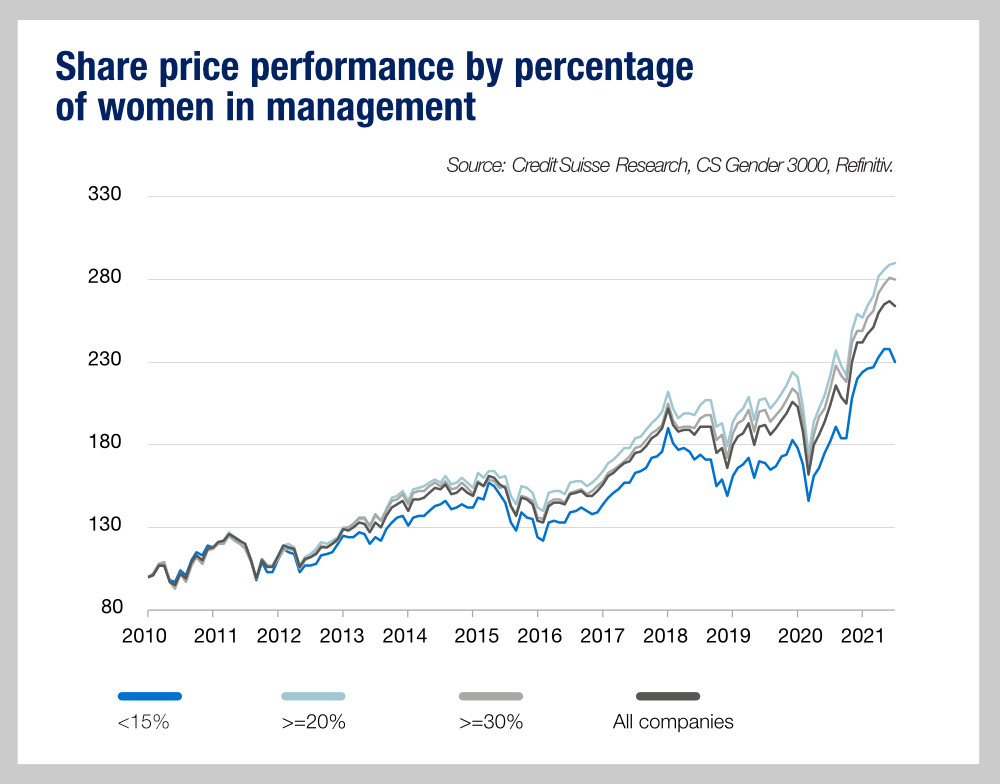 The best- performing companies in terms of share price display superior diversity in both the boardroom and the C-Suite according to the Credit Suisse Research Institute.

A study, “The Credit Suisse Gender 3000 in 2021: Broadening the diversity discussion,” found that since 2010, companies with an above-average (20%) share of women in management produced an alpha of 200 basis points annually when compared to companies with less than 15% of women in their management teams. This is slightly less than the previous report in 2019, where returns were closer to 300 basis points.

The report said: “Rebalancing our portfolio to begin from the relevant year to reflect the past three Gender 3000 universes (2016, 2019 and 2021), a review of the forward returns shows that companies with greater gender diversity (20% and 30%) in senior management show a similar outperformance of 200 and 180 basis points, respectively, on an annualised basis.”

The bank has created the Credit Suisse Gender 3000, a proprietary database of  around 3,200 listed companies to analyse gender diversity. Analysts from the Global Securities research team mapped the gender profile of senior executives alongside an overview of boardroom diversity in their respective industries company by company.

The research found that since the last study in 2019 boardroom diversity has improved globally with an average of almost 24% female representation in corporate boardrooms. Between 2015 and 2021, the percentage of women on boards  has increased by 8.9% and more than doubled if compared with the start of the decade.

“The consistent take-away from prior reports was that the closer we come to the CEO office – or the sharp end of our notional Management Power Line – the fewer women we find,” said the report. “The bad news is that this theme is still very prevalent.”

More than half of pension funds do not expect their climate change mitigation targets...
Read more
SustainabilityESG-DataLinkedIn
Previous articleESMA proposes changes to “burdensome” best execution obligations
Next articleAsset managers need to play a role in the energy transition