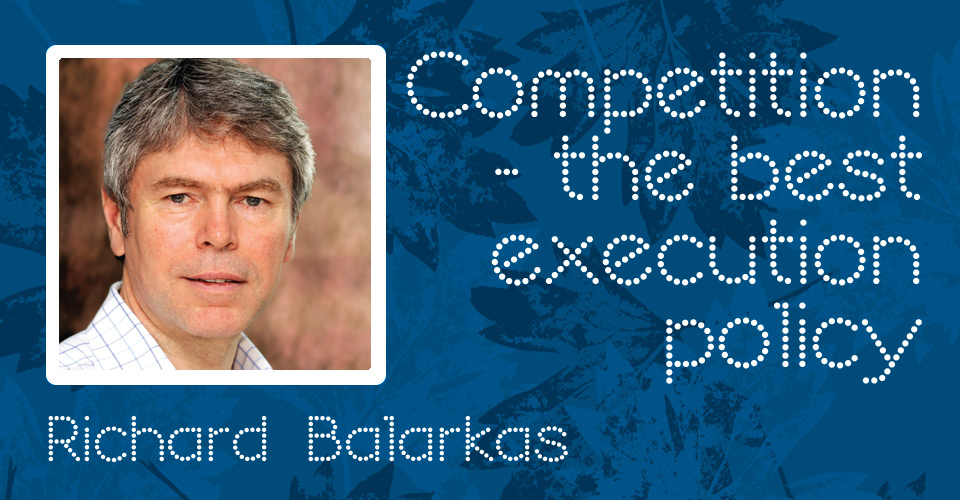 Richard Balarkas is considered a leading pioneer in electronic trading and the development of market structure, and now acts as an independent advisor and board director. Previously Richard held a number of senior global positions within leading brokerages, investment banks and exchanges, including CEO of Instinet Europe, Global Head of Electronic Trading at Credit Suisse, COO for trading at BZW, CEO of the City Group for Smaller Companies, and Head of National Market Development at the London Stock Exchange. In 2005 Richard was elected by his industry peers to serve as Co-Chair of the FPL Global Steering Committee, the organisation responsible for setting industry standards for electronic trading.

“Like pornography, best execution is incredibly difficult to define, but I know it when I see it”. These were the opening words of a short speech given in 2007 by Simon Thompson who was then global head of trading at BGI. While it is memorable for the comedic effect caused by the candour of the delivery, he was making a more insightful and serious point than many realised. Simon was borrowing from one of the most notable US Supreme Court rulings in history when, in a 1964 obscenity trial, Justice Potter Stewart carefully avoided the inherent risks associated with providing an ever more prescriptive definition of obscenity. Instead he based his ruling on the basis that “I know it when I see it”.

“I know it when I see it” is not however a response that will generate brownie points for any trader being interrogated by regulators, management or clients on how to evaluate execution quality. Regulators especially cannot be expected to trust the market as a whole, despite the fact that industry leaders have always worked to much higher self-imposed standards than those in the rule book. Instead they are prone to “Behavioural regulation”, a term I use to describe the misguided belief that more rules equals a better, safer market. The expansion of the FCA rule book in the years leading up to 2008 did not avert the next financial crisis nor the LIBOR scandal, and the prescriptive best execution rules introduced by the SEC actually created one.

Had the SEC followed Justice Potter’s lead the US taxpayer could have been spared both the expense and trauma of the so-called flash crash, as its root cause was the SEC’s policy of prescribing best execution, in particular the stipulation in RegNMS that US exchanges that do not have the best bid or offer should route orders to other exchanges that do. Add this ingredient to a recipe that includes outrageous “stub quote” or snake in the grass orders but is absent market circuit breakers, and a liquidity shock could leave lucky buyers and not so lucky sellers getting best execution at a fraction of the value of the “real” stock price. The flash crash was not a black swan event as it was so easily predictable.

Given the tendency of ethical standards in the financial sector to vaporise far more frequently than a trillion-dollar flash crash, one can forgive regulators for being prescriptive, but by being prescriptive the SEC did more than create a volatile market structure, it distorted competition between exchanges, and almost eradicated competition between brokers to achieve best execution.

The answer to best execution lies not in prescriptive rules, but in having an effective competition policy which allows for diversity amongst service providers, and which allows consumers to act as discerning buyers. Unfortunately competition policy has not been on the agenda of most regulators until fairly recently, and as a result the market has for decades been systemically anti-competitive.

In Europe regulators have been slowly moving in the right direction. With the advent of MiFID I, best execution came to be regarded more as a process than the attainment of the ‘Holy Grail’ of prices. Service providers are required to define their policy, and in theory end users should be able to choose from a menu of execution service offerings ranging from haute cuisine to everything you can eat for a fixed price. It sounds like it should be good for competition, but it only works if the competitive environment is healthy, which it was not.

Until January 2018 nearly all buyside traders in Europe were fundamentally compromised in their ability to achieve best execution by systemic conflicts of interest caused by the bundling of payments into trading commissions. Buyside traders could not act as discerning buyers of brokers’ execution services as they were the conduit by which their firms paid brokers for research, corporate access, and interesting conversations. (My suspicions about this bundled commission malarkey were first aroused when I received votes for having ‘interesting conversations’ with a client. I soon discovered these votes were IOU’s written in disappearing ink and no basis on which to try and run a business.)

Exchange competition was also sub-optimal. In late Spring 2008 the first edition of Best Execution magazine sported a picture of Peter Randall of Chi-X fame. The successful entry of Chi-X into the exchange space was taken as one of the main indicators that MiFID had been a success, especially from a competition perspective. I maintain Chi-X was a success despite MiFID, not because of it. Some major brokers took years to connect to Chi-X, most notably those who had stakes in competitors such as Turquoise, and it is still the case that the majority of brokers providing execution services in Europe have not connected to all the new major liquidity pools. Such blatant negligence however, does not appear to have affected the ability of those brokers to maintain market share.

The best thing European regulators have done for execution quality is to consign bundled commissions to history with MiFID II. Gone are the days when clients would not trade with a broker because a) you charge too little and I need to pay other bills, b) your research sucks, c) to do so would make them ‘unprofitable’, etc. Unbundling tackles the distortions caused by conflicts of interest and improves the competitive environment for sellside execution services. Selling broker execution services in a post MiFID II world must be so easy!

Given the litany of fines in recent years for execution related misdemeanours it is perhaps too much to hope that the sellside has changed completely. MiFID II still allows for plenty of dubious interpretations of what constitutes an appropriate execution policy, and as the largest piece of regulation ever drafted to protect the public from the avarice of financial services it is bewildering that spot FX is not deemed to be a financial transaction and therefore excluded.

Nevertheless my hope is that, at least in Europe, competition policy and market policy are now better aligned such that if firms fail to deliver quality execution services we will see their clients react before a regulator steps in. There are no more excuses; firms who cannot deliver quality services should go out of business. In future if any regulatory action has to be taken against a firm for failure to deliver best execution it will be a sad indictment of the market as a whole.