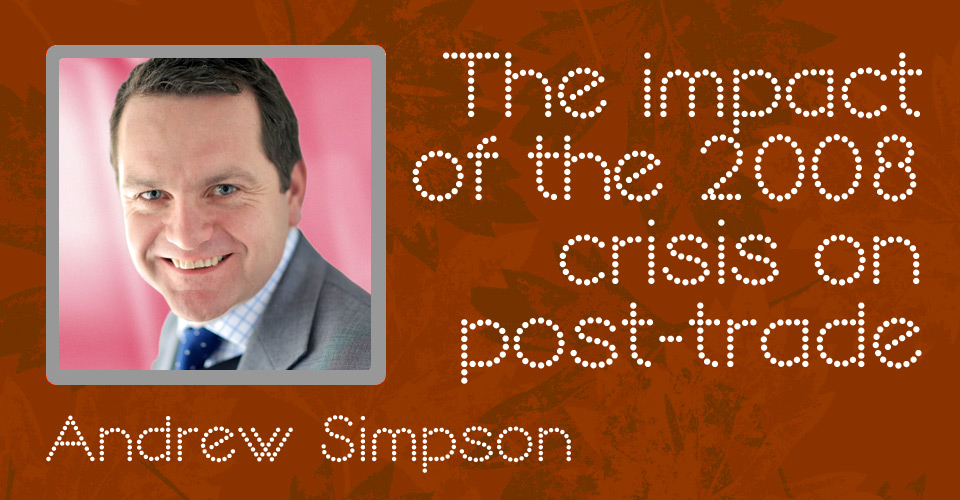 In the book Freefall, 2001, Joseph Stiglitz says that, “the only surprise about the economic crisis of 2008 was that it came as a surprise to so many”. Certainly what shouldn’t have been a surprise after 2008 was the swathe of new regulation in response. For more than two hundred years financial markets have witnessed a cycle of crisis followed by regulation. Whilst this is not an absolute, there are sufficient examples for it to be considered a general trend. For instance, the regulation that followed the Wall Street crash of 1929, such as the Glass-Steagall Act in 1932 and the formation of the SEC in 1934. Or the Buttonwood Agreement in May 1792, a consequence of the 1792 crash, and which ultimately led to the creation of the New York Stock Exchange and Board in 1817. There are others.

Perhaps more surprising is that financial rules are relaxed some years (often decades) later. Those who ardently demanded new protective rules subsequently relax their perspective and support more liberalisation for increased growth and competitiveness. Glass-Steagall for instance was finally repealed in 1999, after numerous dilutions to enable the US to compete on the global stage.

This essay examines the consequences of the 2008 financial crisis on post trade market structure. It also examines whether there is already the drive to reduce, dilute or remove some of the rules that were implemented to protect us, even only 10 years later.

Following the events of September 2008, the G20 committed to a fundamental reform the global financial system. In Pittsburgh in 2009, the G20 stated, “major failures of regulation and supervision, plus reckless and irresponsible risk taking by banks and other financial institutions, created dangerous financial fragilities that contributed significantly to the current crisis. A return to the excessive risk taking prevalent in some countries before the crisis is not an option”.

With this dire warning, the stage was set for one of the largest regulatory reform programmes ever undertaken: a programme with global reach and the laudable intention to create a more resilient financial system that served the needs of consumers, reduced risk and facilitated growth. Whether those intentions were achieved is hotly debated. Undoubtedly progress has been made but until the last year, growth had been weak with inflation below target and wage growth almost stagnant. The new regulation has divided opinion with unintended consequences and cost billions of dollars to implement.

I believe there are five key areas that should be discussed and which are at the heart of the legislative change since 2008.

The first is risk reduction and increased transparency, which are often mentioned bracketed. This over simplifies their complex interconnectedness because from a markets perspective they are North and South brought together only through the glue of reported data. Both are required for balance but without data they are simple aspirations. Risk has been addressed through the capital regime that reduces leverage and new regulations that mandate central clearing, more prescriptive risk monitoring and exchange of collateral for OTC exposures. The result has been a demand for more high-quality liquid assets. The increase in transparency has led to the generation of vast amounts of data for real-time risk management, trade reporting, transaction reporting to regulators and reporting of derivatives transactions to Trade Repositories. Many complain that the reporting requirements are duplicative, that the costs far out-weigh the benefits and that regulatory systems cannot cope with the volume of data.

The drive to reduce risk and increase transparency has increased complexity and cost. Also the expansion of CCPs as the key risk management intermediaries may have created a new single point of failure. As the recent default of electricity derivatives trader, Einar Aas has shown, the systems aren’t perfect. The capital buffers withstood the significant market movement but in reality, the size of the hole (Ä114m) was small compared to Lehman or MF Global and yet the mutualised loss layer or default fund was eroded by 2/3. Firms have now replenished the default fund but are left asking why the controls did not trigger an earlier response to the risk the self-clearing trader was carrying against his balance sheet.

The second area is the undoubted increase in the prescriptiveness of regulation, evidenced by the sheer volume of regulatory text. I believe the move away from principles-based regulation is good, but with prescriptiveness comes complexity and delay. Complex structures take time to form and leave open the chance for errors. It was ten years between MiFID and MiFID II/ MiFIR – costing the industry millions of dollars in lobbying, compliance costs, legal review, IT and operational change. Many smaller businesses simply didn’t have the resources available and were left at the last minute trying to establish LEIs, solve transaction reporting issues or set-up new connections. The market needs a range of firms and the extent of the regulation has impacted competition, especially for smaller firms.

Next is the increase in CCP competition. I believe in the free market, but we have to recognise the public good of systemically important infrastructures such as CCPs. This topic merits an entire document of its own and so I will summarise some key points. In equities, CCP competition is not a feature purely borne out of the new regulation – LCH Ltd and SIX X-clear were clearing for Virt-x before EMIR was introduced – but the new regulation has codified the framework. In equities, CCP competition has delivered considerable price compression amongst those interoperating CCPs (by around 80% since 2008) and even those not interoperating such as LCH SA have been forced to reduce tariffs. In equities markets I believe this competitive landscape should and will prevail.

Consolidation of equities CCPs may be a consequence. With low tariffs and volume discounts the income of CCPs does not increase proportionately with increases in transactions from new venue connections. Even those with significant market share are likely to be under pressure. This will shape new commercial models and new partnerships. Disregarding possible Brexit impacts, which could lead to fragmentation, a reduction in CCP numbers through consolidation could result in overall growth for markets as we remove frictional layers and increase efficiency. There is a big prize for the winner(s) but regulators should monitor this carefully and ensure the fight is fair – no cross subsidisation and no playing with risk buffers to appear more attractive.

Derivatives and repo markets though are different to equity markets. Competition plays out in a different way: in derivatives, between a few vertical structures. There is no interoperability between CCPs in derivatives and nor should there be. In bilateral repo, LCH SA and CC&G have interoperated since 2004, but this was put under incredible strain during the Italian interest rate crisis in 2011. Ultimately, in both repo and derivatives, competitive demands should be balanced against the nature and quantum of these critical CCPs. In January this year key authorities of the main derivatives venues (FCA, BoE and BaFIN) granted a transitional period (effectively a temporary waiver from MiFIR Open Access) until July 2020. BaFIN went further and granted the transitional period to Eurex Clearing. Shortly afterwards, Euronext was also granted a waiver for its 3 derivatives exchanges in Brussels, Amsterdam and Paris. In my view, we have competition in derivatives markets without needing to enforce it through Open Access. CCP commercial frameworks are an important feature of that competition already and if 2008 taught markets and regulators anything, it is to be cautious with changing listed derivatives market structure.

The fourth topic is the reduction in FCMs and BDs in the US and MFIs in the Eurozone. In the US in March 2007 there were 5,892 BDs and 171 FCMs. In July 2018 these numbers had dropped to 3,974 BDs and 64 FCMs. In the euro area a similar drop can be seen: in July 2018 there were approximately 5,400 MFIs, down from 7,700 in 2007 despite an expansion of the euro area. The new regulatory environments in the US and Europe demand greater capital, significant investment and increased operating cost. In the US whilst the numbers of FCMs has more than halved over the period, the amount of capital required by FCMs has almost doubled. On June 1st, 2015, Chris Giancarlo likened FCMs to “an endangered species”. He pointed to mismanagement of a few (such as MF Global) but also highlighted US monetary policy, which was reducing the potential income of FCMs, and the cost of regulation. These features have created a concentration risk, fundamentally reducing competitiveness but also the ability for markets to withstand large-scale fractures.

The final area is the drive towards recovery and resolution standards, which are intended to move the industry away from the concept of public bail outs and require private bail ins. It is no longer acceptable for the public purse to be considered the backer to failing financial services firms. The outcome of 2008 was a very angry public, who considered all bankers to be bad. Who could blame that opinion when people were losing houses due to flawed leveraged structures and banks were being bought by the government. Recovery and resolution are important statements of intent. Clearly, it will add additional capital pressure but we have to reduce moral hazard.

Central to each of the five themes, is the need for stronger, clearer, harmonised and more coordinated regulation than was in place leading up to 2008. This comes with a cost and some complain that it has reduced competition. Already in the US, at the very top there is sympathy with that viewpoint. In May 2016 Donald Trump stated that “Dodd-Frank has made it impossible for bankers to function” and in May 2018 he signed a bill rolling back some of the Dodd-Frank Act. This includes reviewing the Volcker rule. In his opinion institutions, large and small, are “at a disadvantage in terms of loaning money to people wanting to open up business”.

After the 2008 global financial crisis the G20 demanded a more resilient system that serves the needs of our economies, reduces moral hazard, limits the build-up of systemic risk and supports strong and stable economic growth. The global regulatory framework developed since 2008 is not perfect. It is complex, overly prescriptive and expensive. It demands considerable capital buffers and a reduction in the number of credit institutions as a consequence is not good. But in terms of protection of the consumer I believe the prudential oversight limits risk taking and reduces the likelihood of failure.

Nevertheless, we are already seeing how political desire is starting to question the protective walls. As ever we are servants to the ballot box. There should be no surprise at all in that. n

n Andrew Simpson is an advisor on market structure and strategic change, and has more than 20 years experience in financial markets, having run strategy and business development for major exchanges, CCPs and the UKs financial services regulator. He has specialised in post trade markets structure for the past decade and has led on policy issues and infrastructure change during this period. Simpson’s industry experience is founded on his degree level education, having an Honours degree in Structural Engineering and Architecture from The University of Manchester.

ANYTIME, ANYWHERE: AGILE WORKING ON THE BUYSIDE. Louise Rowland looks at the opportunities and ...

THE END IS NIGH. Lynn Strongin Dodds looks at the challenges in reaching the Libor end goal. Fi ...

THE FORECAST REMAINS CLOUDY FOR A REDUCTION IN MARKET DATA COSTS. Sarah Underwood charts the lo ...