With significant product changes underway from Eurex, and the ongoing discussions surrounding clearing and reform of OTC derivatives in Europe, 2014 continues to be an interesting year.

Beginning in April 2014, we saw both TOM and Euronext dropping approximately 3% of market share each over March 2014, while Eurex showed a commensurate increase to just under 18% (see Fig 2).

In May, we saw a major shift with Euronext gaining a highly significant 13% over April, bringing them to almost 64% of the market, a high point for this exchange. Both Eurex and TOM shared significant decreases to 10% and 28% respectively (see Fig 3). .

In the first two weeks of June, we saw a new record set with Euronext showing approximately 65% market share, the highest to date. Both TOM and Eurex continued a small yet significant decline to just below 27% and 8% (see Fig 4).

AEX Options showing stabilization and an almost even division of market share between the players.

In April 2014, TOM made a significant increase to almost 50% market share. Euronext showed a marginal decline, effectively splitting the “AEX based” business at 50-50 for the first time ever (see Fig 6).

During May 2014, Euronext gained approximately 5%, edging out the somewhat equitable split with TOM at just under 45% (see Fig 7).

During the first two weeks of June 2014, we observed Euronext resuming a gentle but steady climb to an almost 58% share of these highly contested products (see Fig 8).

The statistics continue to show that 2014 is shaping up to be the year of stabilization that TAG predicted. In the second half of the year, it will be interesting to see how the introduction of new derivatives products and increased competition affect the marketplace. 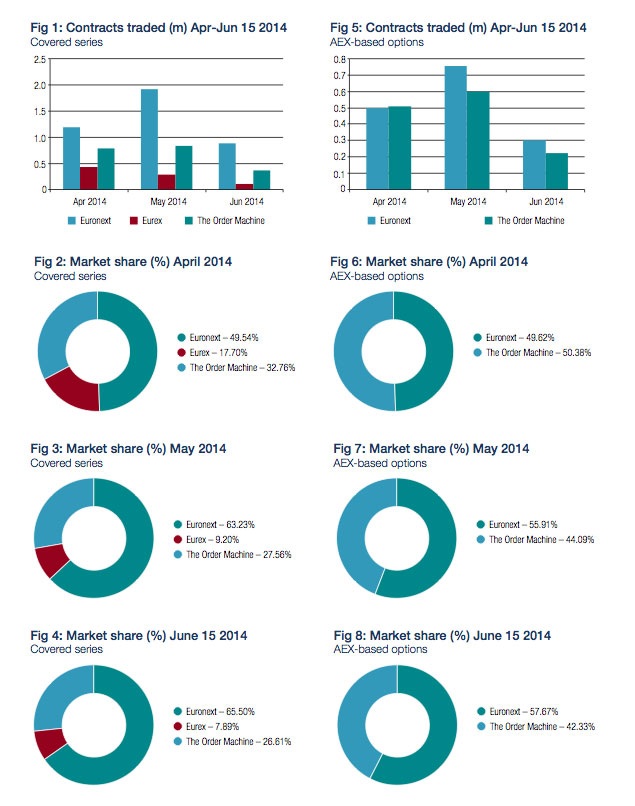 • Eurex is operated by Deutsche Börse AG and offers a broad range of international benchmark products. On a combined basis with the International Securities Exchange, (ISE) they are a global market leader in individual equity and equity index derivatives.

• TOM MTF is a Multilateral Trading Facility located in Amsterdam, The Netherlands offering trading in shares, derivatives and ETFs.

DISCLAIMER: All data derived by TAG from publicly available sources utilizing proprietary tools. Although TAG believes the data to be correct, we do not guarantee its fitness for any purpose. TAG shall not be held liable for incorrect data under any circumstances. Any opinions expressed are solely those of the author.