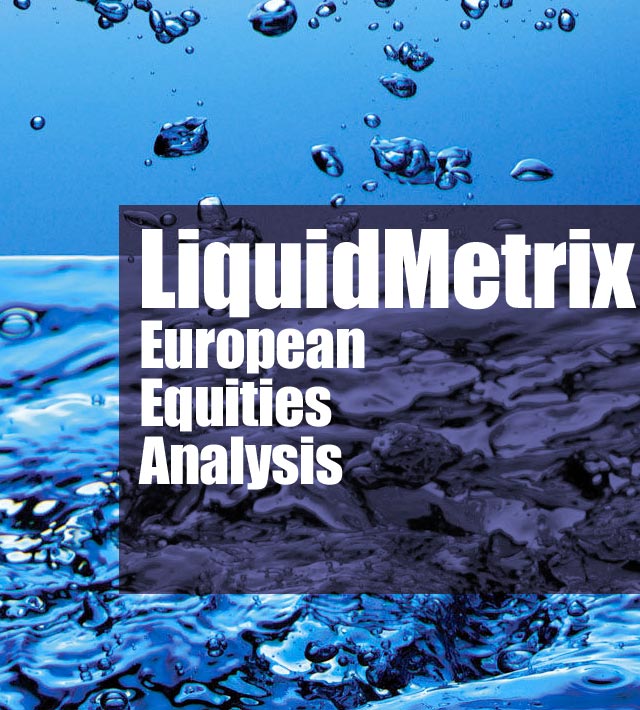 LiquidMetrix analyses consolidated performance figures for stocks on major European indices and the changes from the previous quarter.

The charts and figures below are based upon LiquidMetrix’s unique benchmarking methodology that provides accurate measurements of trends in market movements. Trading volumes on lit markets including auctions are taken into account, as well as dark trading on the major MTFs.

MTF market share has remained more or less unchanged compared to Q2 2015 but is still close to the peak rates of over 32% recorded at the beginning of 2015.

Top of the book bid/offer spreads tightened overall at the start of Q3 2015 to reach the lowest levels seen for some years. However, the last two weeks of August saw a re-widening of spreads.

This mixed picture explains the earlier data showing no significant net change in MTF market share Europe wide. Interestingly, the gap between primary share of most fragmented market (UK) and least fragmented (Italy) is at its lowest ever suggesting the level of fragmentation is increasingly converging across European markets.

There is a mixed picture across different markets for top of book spreads, UK stocks had narrower spreads across all trading venues whereas French and Swedish spreads generally widened.

Turquoise now has third place across all countries after narrowly overtaking BATS in Sweden in Q3 2015. Also of interest is that in the least fragmented market (Italy) the Primary Venue continues to enjoy a significant top of book spread advantage over its rivals.

The basic trend for depth weighted spreads is as usual similar to that of top of book spreads, i.e. UK spreads tightened whilst France and Sweden widened.

It’s interesting to note the very clear advantage the Primary Venues have over their MTF rivals in the depth weighted spreads category.

Resting order book liquidity changes were mixed in Q3 2015. There were quite significant increases in liquidity on Primary exchanges for UK, French and German stocks.

However for BATS and TRQX, on book liquidity fell across all countries. It is interesting to note that the Primary exchanges have more top of book liquidity than their rivals combined in all featured markets.

The LiquidMetrix Volatility Indicator provides a measure of high-frequency market volatility based upon 30 second price movements.

Volatility was generally lower over the summer months, however the Chinese related events towards the end of August saw a very large spike in volatility to the highest levels seen in recent years.

At the end of October, this volatility appears to have subsided somewhat, however, if it were to remain at elevated levels we might expect that to have a significant impact on spreads, liquidity and market shares in Q4 2015.