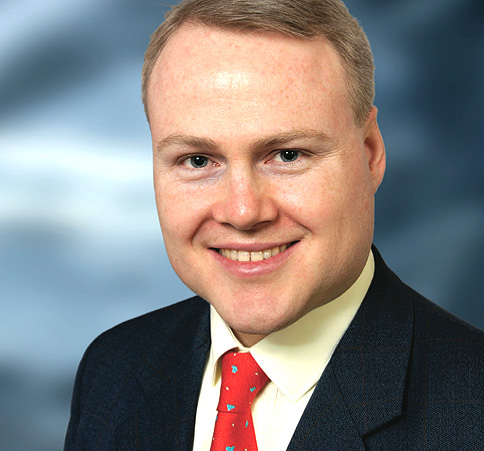 In the first of a series of articles for Best Execution and in the run up to the implementation of MiFID II, Robert Barnes, CEO of European multilateral trading facility Turquoise looks at the past, present and future of dark pools, dark liquidity and block trading.

With just over a year until MiFID II comes into force on 3rd January 2017, now is an ideal time for a review of its progress in Europe. Anecdotally, the term ‘dark’ first appeared in September 2002, when Island ECN, one of the first electronic communication networks established for trading equities in the US, decided it would stop displaying key ETF order book limit prices. It was a way to avoid connecting to the relatively slow Intermarket Trading System (ITS) while still complying with SEC Regulations. Rather than join ITS, Island went ‘dark’ and limit orders were no longer visible to any market participant.1

Dark pools aim to reduce information leakage by allowing orders to reside that are not yet executed nor displayed to the market. This is hardly novel. Consider the hidden components of iceberg orders, or the traditional matching by brokers, of buy and sell orders on the way to the market. Dark pools effectively augment the traditional broker skills of finding the other side of a trade and automate the process with electronic pipes. 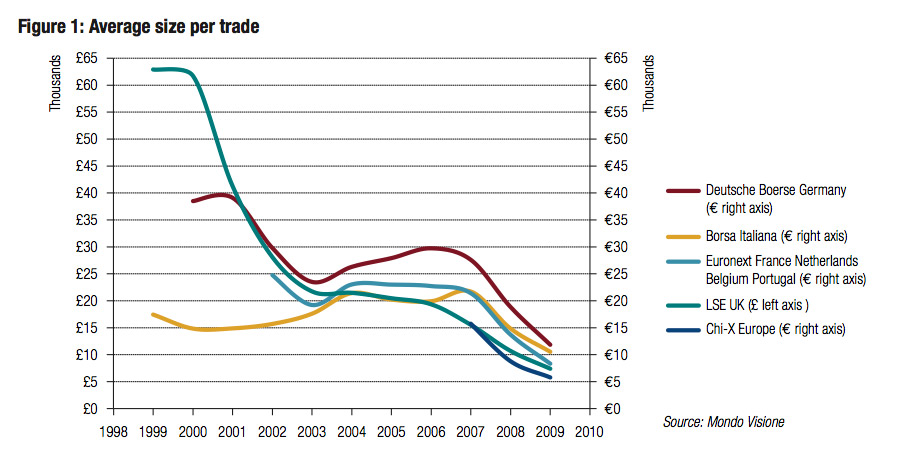 A consequence of electronification is a trend of shrinking trade size.2 Figure 1 shows this clearly with a selection of exchange data collected by Mondo Visione.3 In the two years after the MiFID launch in November 2007, the average lit order-book trade size in Europe fell to approximately E10,000. This encouraged the development of dark pools to complement lit order books as electronic execution mechanisms, to facilitate larger block trading, and to avoid signalling to competitors.

As more dark pools appeared in Europe, members added each as an additional venue to their algorithmic smart routers. By the start of 2013, Fidessa recorded the Q1 value of average European dark trades at €8,201, up from €7,269 in Q4 2012.5 More recent analysis by Rosenblatt Securities’ European ‘Let There Be Light’ monthly report including external venue dark order book average trade sizes confirms a slight increase – correlating to the increase in stock price levels – to €10,409 in May 2015, which is still similar to the average trade sizes on the larger European lit order books.6 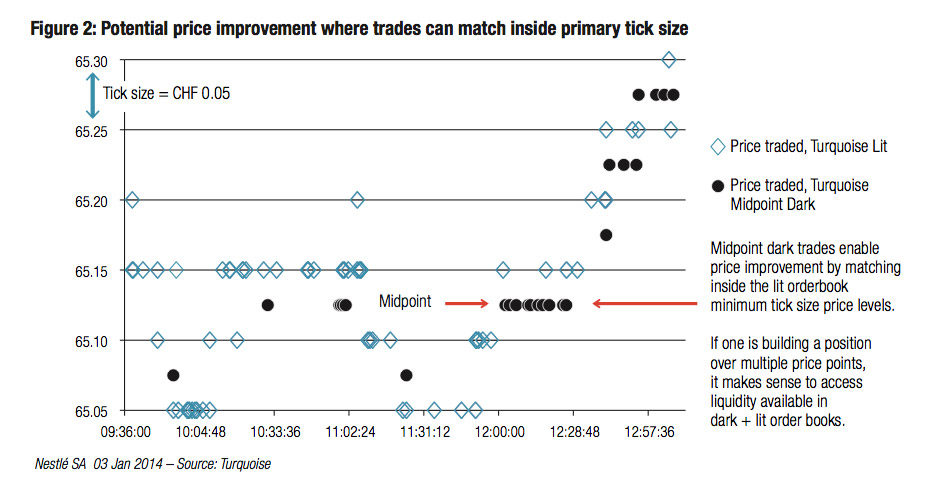 One notable aspect of dark order books is their ability to execute at the midpoint of the Primary Market Best Bid and Offer. Furthermore, there are times when this midpoint price may be at a level inside the tick size, that is, the minimum price increment that prices can move in the lit order book. Figure 2 shows some benefits of this approach.

In the chart, the y-axis is price and the x-axis is time (intraday) for one security. The blue diamonds are prices traded in the lit order book and follow the primary market tick size regime. The black circles are post-trade prints of successful matching in the Midpoint dark pool.

On the right hand side of the graph, you will notice the price is rising. The question is: if one is building a position and only purchasing at the increasing lit order book price increments, is one really achieving ‘best execution’ when it is possible to trade potentially some of the order in the dark? Even if just some of the order is matched in the dark, it is apparent that one is more likely to achieve a better long-term investment return by benefitting from the price averaging of price levels inside the tick size of the lit order book.

While many electronic algorithms contribute to dark pool average trade sizes similar to those of lit order books, innovations are appearing to allow users to realise the ability to trade larger blocks via scalable order book mechanisms. These innovations can serve as another channel to complement those of the traditional human sales trader associated with larger-sized trades, and the electronic channel that accesses a single virtual pool of liquidity, across a physically fragmented market, associated with many smaller-sized trades. These I shall explore in next issue’s article.