The Covid-19 pandemic has shortened the runway for many fintechs, posing an “existential threat” to the sector, according to a new report from consultancy McKinsey & Co – ‘Detour: An altered path to profit for European fintechs’.

The report notes that in a matter of weeks, after  the virus took hold, capital funding for fintech companies went from surplus to scarcity. After growing more than 25% a year since 2014, investment into the sector dropped by 11% globally while Europe fared worse with a 30% drop in the first half of 2020, compared to the same period in 2019.

In July 2020, after months of COVID-19-related lockdowns in most European countries, the drop was even steeper—18% globally and 44% in Europe, versus the previous year. The paper notes that “this constitutes a significant challenge for fintechs, many of which are still not profitable and have a continuous need for capital as they complete their innovation cycle: attracting new customers, refining propositions and ultimately monetising their scale to turn a profit. 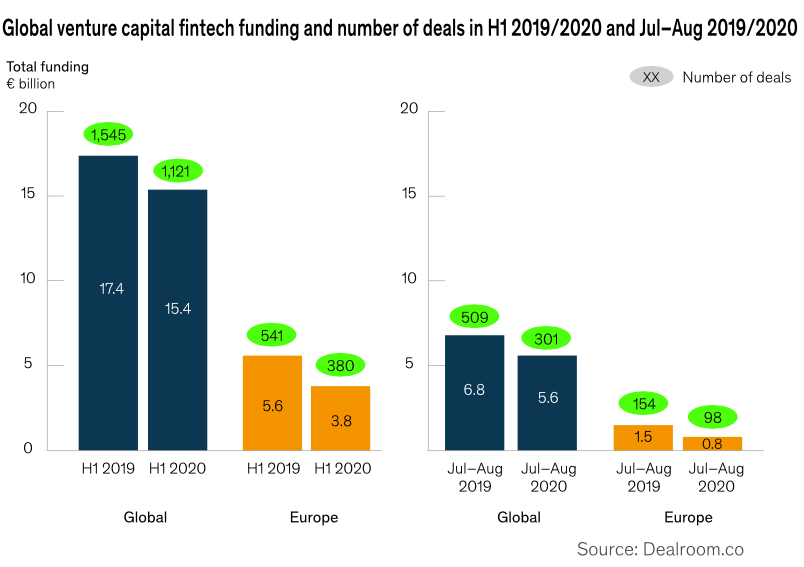 Crunching fundraising data for the last three years from Dealroom, the consultancy found that as much as €5.7 bn will be needed to sustain the EU fintech sector through the second half of 2021 – a point at which some sort of economic normalcy might begin to emerge.

However, it is unclear where these funds will come from. Fintechs are largely unable to access loan bailout schemes due to their pre-profit status. In addition, government-backed wage support/furlough packages have income caps well below the typical salaries of fintech engineers and other skilled talent, which represent a large proportion of the fixed costs of these businesses.

McKinsey believes that “while the VC Iventure capital) and growth investment community will continue to back some companies, they cannot meet the aggregate demand on their own.”

It adds, “European governments have stepped in to help, but they too are only a stopgap. For instance, the UK created a coronavirus Future Fund to invest in growth sectors of the economy, of which £320m through a convertible loan that matches funds raised from venture investors. Germany and France have also launched similar funds.”

Although  subsectors have and will be impacted differently, B2B fintechs, which sell services and technology to financial institutions, are struggling as they grapple with increasingly challenging selling environments.

As the report points out, 40% of  large financial institutions, who are now more wary of upfront costs and multi-year commitments that won’t pay off quickly, said they are conducting a more detailed return on investment (ROI) analysis before making purchase decisions.

The winners will be those fintechs that help financial institutions rapidly digitise, automate, and reduce their costs.  By contrast, those providing end-customer capabilities, such as dashboards and visualisation components, may now be viewed as a “nice to have” purchase.

Environmental, social and governance (ESG) factors have been gaining in importance in the inves ...

Assets in European sustainable funds have risen by 52% in the past year to €1.1trn in December ...